GAME REVIEW – Back To The Future: The Game – Episode 5: OUTATIME 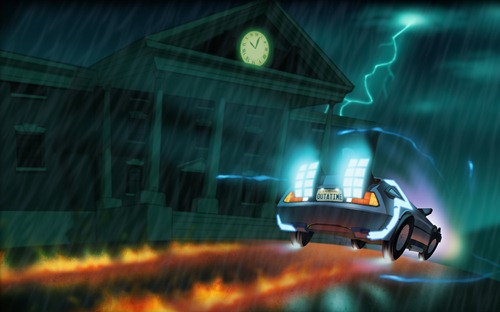 Back To The Future: The Game – Episode 5: OUTATIME is the final chapter in Telltale’s episodic continuation of the original film trilogy. So far, it has been a series of impressive highs (“Episode 3: Citizen Brown is not only the best episode of Back To The Future: The Game yet, but also one of Telltale’s finest episodes full stop”) and disappointing lows (“Double Visions is more of a stumble backwards than a leap forwards”). Now, only one question remains: can Episode 5: OUTATIME end everything on a high?

Episode 5: OUTATIME begins with Marty being awakened by a phone call from young Emmet Brown. One of my main complaints with last month’s episode was the lack of locations. One omission particularly annoyed me: “The Hill Valley High School in the background, complete with a man guarding the entrance, gives the illusion that the Expo is taking place inside and Marty will later gain entry. Much to my dismay, this never came to pass.” To my absolute delight, soon after Marty hangs up the phone during the opening cutscene of OUTATIME, he enters this very same Expo and the game begins!

This initial location is superb, featuring plenty of attractions to draw the player’s attention. There are many hotspots to click on, some essential, others included simply for fun. After the limited interactivity of Double Visions, OUTATIME feels like a breath of fresh air. The entire Expo is open to explore, with Marty tasked with finding young Emmet to ensure he completes his scientific display.  He must also discredit a meddling Edna Strickland, who is bending the ear of Officer Parker with information being fed to her by an angry Carl Sagan, aka First Citizen Brown. The solution, involving a recording pot plant, a futuristic telephone and a shifting house of glass is delightfully convoluted and satisfying to solve.

What’s more, that is only the beginning. Marty soon teams up with the real Doc, battling a deranged and confused Edna Strickland in both an alternate present and a potentially disastrous past. Without giving too much away, I was thrilled to actually do quite a lot of time travelling during this final episode, rather than simply staying in the often overused time periods of the previous episodes. I must note however that the episode description is slightly misleading: “Lives are changed, mysteries are solved, and paradoxes are avoided as Young Emmett seals his fate, sending Marty and Doc on a climactic chase through Hill Valley’s past, present and future.” Although there are elements of the future shown – you’ll have to reach the very end of the game to find out what I mean – the player never actually travels beyond 1986, which is a bit of a shame. Perhaps in Season 2?

Although the gameplay has improved from past episodes – there is basically more of it to be honest – the difficulty is still pretty low. Again, this does lend itself well to the flow of the game, which is obviously a cinematic adventure, but I did occasionally pine for a real brain-twister to be thrown into the mix. One puzzle sees Marty and Doc recreating events from the past to trigger the memory of a certain character in the present and I really enjoyed figuring out how to do this. Overall, the puzzles were easy but engaging and I do feel they were stronger than previous episodes.

The production values of OUTATIME have also improved considerably. As previously mentioned, the locations are more varied and interactive which really helps to lessen the sting of the easy difficulty. An interactive sequence near the end involving two DeLoreans, a hoverboard and some gaming headsets is a major highlight, with the camera swooping dramatically to follow the action as Marty scoots around, clinging on for dear life. My only complaint – and I have also noticed this in the previous episodes – is that the game will sometimes give you the option of aiming the camera with either the mouse or WASD/arrow keys. In these situations, the mouse controls NEVER work, feeling overly responsive and a nightmare to accurately control. Thankfully, using the directional keys instead is a breeze, but I still found this pretty odd.

The main draw of Back To The Future: The Game for me has always been the characters and OUTATIME takes things to a whole new level. There are many moments of sadness, humour and excitement throughout, all underpinned by some of the finest voice work I have ever heard in a video game. Christopher Lloyd is at his best as the real Doc we all know and love, but it is AJ LoCascio who continually surprises. This guy isn’t just a great Marty McFly impersonator: he is a great voice actor, pure and simple. I would rate him right up there with such iconic video game voice actors as David Hayter (Solid Snake in Metal Gear Solid), Dominic Armato (Guybrush Threepwood in Monkey Island) and Nolan North (Nathan Drake in Uncharted). I was somewhat disappointed that Claudia Wells didn’t return one last time as Jennifer Parker, but when you have Michael J. Fox voicing several characters – I won’t spoil which ones exactly but suffice to say he is brilliant – it becomes easy to forgive. 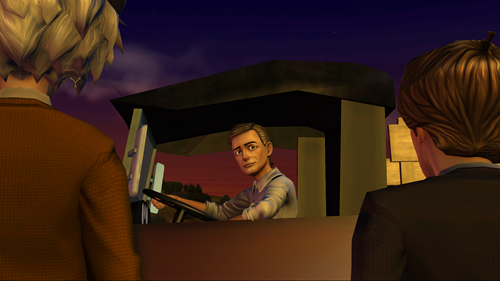 Back To The Future: The Game – Episode 5 manages to soften the blow of last month’s dull note with a finale that is both exciting and fun. I did come across a game-breaking bug very early on, but Telltale quickly updated the game to address this issue and I must stress that it didn’t effect all players. Many questions are finally answered – such as: Who is Trixie Trotter?  and: Who is the speakeasy arsonist? – and many more are raised too. The ending is batshit crazy, hilarious and, coupled with a “To Be Continued…” post-credits note, promises great things to come in the future.

When I first reviewed Episode 1 six months ago, I finished by saying that “Back To The Future: The Game may well grow to become Telltale’s greatest gaming achievement yet.” Looking back at the series as a whole, I don’t quite think that is the case anymore, but I must make it clear that this is still perhaps the greatest film-to-video game adaptation ever made. For that, I applaud Telltale Games and eagerly look forward to seeing what they do next. Marty and Doc, it has been an absolute pleasure.