Many readers of Alternative Magazine Online will no doubt have read my earlier critique, detailing how I felt Modern Warfare’ 2’s single player experience short-changed gamers. Yet of course, Modern Warfare 2 is much more than just a 6 hour single player campaign. With my full review, I plan to further expand on my previous criticisms, whilst also shedding light upon several factors that, for many, will make this game a must buy regardless… 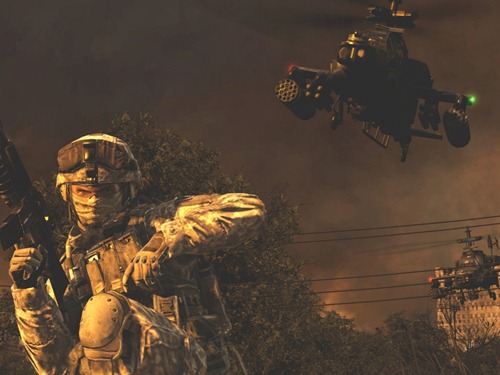 The single player was the area of this game that felt weakest to me. The story is full of plot holes. It is basically an excuse to move the combat to American soil… and I don’t think the plot’s weaknesses justify this decision at all.

This also felt uncomfortable to me as a player; I would rather be fighting in areas that made sense in a modern context. It is kind of hard to swallow all the fighting surrounded by white picket fences in suburban USA, with no civilians in sight and constantly spawning-in enemies.

I didn’t like the now infamous hostage level either. How is it satisfying for me to kill innocent people? But you don’t HAVE to shoot them, you may cry. Well, I WANTED to shoot the terrorists responsible instead… and I couldn’t! So sitting back and doing nothing is in many ways just as bad and unrewarding. Skipping the level? Who wants to do that the first time they play? Still, I feel this level was included for the wrong reasons, with little remorse shown afterwards.

The familiar globe trotting aspect is good though, especially as you get  to see a wide variety of locations. Snow swept levels look absolutely gorgeous, with mechanics such as mountain climbing and snow-mobile racing feeling responsive and fun; the graphics are a step up this time in many ways. The frame-rate is rock solid, making everything feel very responsive. Sure, it doesn’t look as good as Killzone 2 or Crysis… but it still looks great in its own way, with super responsive controls that are yet to be bettered on PS3 for a FPS as far as I am concerned.

Carrying on from the aforementioned mountain climbing and snow-mobiling, other moments of context sensitive action made me grin like a little boy. Pressing crouch to duck down behind a car’s dashboard whilst you sit in the passenger seat being shot at through the front window, using the left stick to steer a jeep after the driver has been shot… these instances are brilliant and there should have been more of them.

Sadly, these moments soon dissolve into what we were doing during COD4’s campaign; namely, shooting waves of enemies in environments that are simply not very interactive upon closer inspection. There are still doors that are just part of the wall, you still can’t take cover properly (fair enough, a cover system may have slowed the pace down… but sometimes it felt like a huge absence to me?) and everything just feels… too fast and linear. 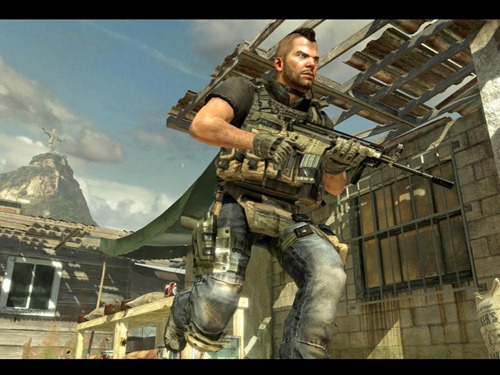 How I mean this is, the globe trotting element is inherently weak because you never form an attachment to the player character (I forgot who I was playing half the time) or any non-player characters. It is all such a blur. I mentioned this in the official Playstation.co.uk forums and some players agreed, whilst others nearly bit my head off: all we want is to shoot people and blow stuff up man!

Fair point, yet I require more from my games. This 6-8 hour campaign is fun, yet I won’t be replaying. I need something more than the shooting and explosions to keep me coming back for more, whether it be an engaging protagonist or a supporting cast that I have come to care about. Sadly, Modern Warfare 2’s single player offered me neither. Still, fun while it lasts.

This mode really surprised me. Stripping away the expectations of a good story (aka the single player campaign) and just providing bite-sized chunks of action (alone or with a friend, split-screen or online) this mode totally delivers.

The mode scales different difficulties/ amounts of players really well. I had fun with this mode on my own, but it was even more fun online. I used to play the bonus mission from COD4, Mile High Club , over and over again; I loved it!

This mode delivers the same thrill as back then, but there are now 23 missions to choose from! Some are taken from the single player, whilst others are brand new. One, taking place on a collapsing bridge whilst enemies drop in from helicopters, is amazing. I only wish the single player had grabbed me as much! This mode is brilliant.

Ah, multiplayer. The real meat of any Call Of Duty. Modern Warfare 2, of course, delivers here 100%. If you are just buying this game for this mode anyway… then don’t hesitate. Go get it!

It take everything that worked online for COD4 and ramps it up to the extreme. It feels faster and less laggy (latest patches installed of course to iron out any little nicks) and is just a blast to play.

You can still upgrade your character with a crazy amount of extras, but the best new additions are the new kill streak awards. Call in supply drops, launch predator missiles and request helicopter support… you can even detonate a NUKE! These kill streaks always seem balanced and fair and there appears to be a system in place to stop the whoopass getting too ridiculous if a particular player is amazing at dealing out kills. I had plenty of fun as soon as I joined a game and seldom felt I had died unfairly.

I do wish sometimes players would run around less and work as a unit. Then again, I think that is more a Counter Strike mentality than anything else; what you get here is fast and furious arcade action that is always entertaining and rewarding.

Also now, if the host leaves, the game no longer ends. There is a short pause, before the host simply shifts to another player. Fantastic! I never had trouble finding a game and the matchmaking system is brilliant. You can also invite friends from your PSN list straight into a game, just as you can on Xbox 360. Result. 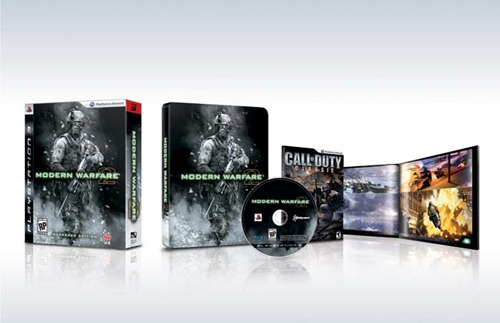 Apart from my postman delivering dented tins twice (I give up now!) the Hardened Edition is pretty nice. The steelbook looks very attractive, and the hardback book features some lovely artwork and concept art, even if the small notes are superficial at best.

The real attraction here is a code for the original Call of Duty (now called Call of Duty: Classic, with some upgraded textures) to be downloaded from the PSN for free. It even includes online multiplayer! (To be reviewed soon…)

My only complaint is the plastic sleeve that contains it all. It is too loose, meaning it gets crumpled very easily and you could also technically drop your tin/ book out of it if you were not careful.

I still think the RRP for even the basic version of Modern Warfare 2 is insane, shame on you Infinity Ward! But online, you can get the price back down to normal levels (my Hardened Edition was only £45.)

Modern Warfare 2 is a game that for many will be a perfect 10. For me, the multiplayer delivers (and then some) yet the single player is sadly missing something. With all of this in mind, I award Modern Warfare 2…