Rolf Saxon is an American actor living in London. He has appeared in a wide variety of television shows, films and plays, although he is perhaps best known by his fans as the voice of George Stobbart in the Broken Sword series of video games. When I first started AMO, I made a wishlist of people I wanted to interview and over the past two years I have been lucky enough to speak with many of them. Rolf Saxon has always been top of the list and I am therefore delighted to present a recent interview with him where we discussed his acting career and all things Broken Sword!

Hello Mr Saxon, thank you for your time and welcome to AMO!

Hi Martin, and thank you.

Well, I’m an actor, born in the States and moved to the UK where I trained, worked and raised a family – I have one son who recently graduated from Oxford and I am now splitting my time between California and London.

How long have you lived in the UK and what prompted the move?

I came to London when I was accepted to the Guildhall School of Music and Drama. I had a couple of offers of work from agents before graduating so I thought I’d give the UK a try instead of returning directly home. I ended up staying for quite a while – about 30 years actually.

How did this change of location affect your acting career?

Well, aside from some relatively early theatre in the SF Bay Area, my career really started in the UK. If I had returned to the US, it would definitely have been different but I’d still be acting.

You studied at the Guildhall School of Music and Drama in London. Had you always aspired to be an actor?

Not always, no, but from pretty early on. I was in high school in Oakland, California when the bug bit. There was a beautiful girl I was infatuated with – I still remember her name – and she said I should take the drama class. Now, I thought she meant she would be there as well so I jumped at the chance. Unfortunately, she wasn’t but she was right about it being the class for me and I found what would be my career. I would very much like to thank her for that. 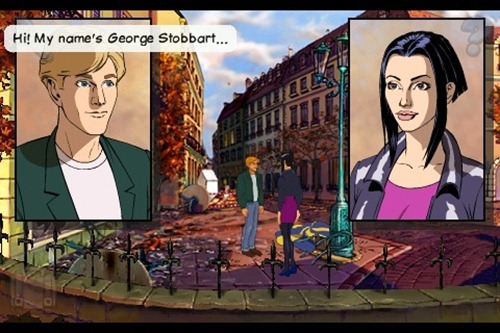 You are well known for your role as George Stobbart in the Broken Sword series of adventure games created by Revolution Software. How did you originally become involved with the first game, Shadow Of The Templars?

The woman who played Nicole in Shadow Of The Templars, Hazel Ellerby, a wonderful actress who was at Guildhall with me, had already been cast and they were having trouble finding a George. Hazel suggested she knew someone (me) who was American and to give me a try. I met the director in a restaurant in Covent Garden – Food For Thought – and after lunch, he offered me the job.

Did you have any idea at the time that the game would be such a big hit?

Absolutely not. That was in the early days of gaming and Broken Sword was the largest game that had ever been attempted up to that point (in fact, as technology has improved, it may still be one of the larger games ever produced). I remember the German firm tasked with putting it all together could not believe the size of the completed script we sent them after the first week – and that was only about half of it.  I think Revolution was concerned about seeing it actually completed.

What attracted you to the role?

I knew very little about the role when I was first offered the job, just an outline. And to be frank, at that point, it was a just a job. Revolution only sent me the first half so I hadn’t even read the entire script by the time we started. It was literally hundreds of pages long.

How much input did you have into the shaping of George as a character?

Well, the script had been finalised and for technical as well as legal reasons it had to stay pretty much as written. However, I was allowed to ‘Americanize’ it and also allowed to play with it a little as well. George and I got to have some laughs together.

What was your relationship like with the folks at Revolution Software?

Charles Cecil (the creator and producer of Broken Sword) is really the only one I have known since the beginning.  He’s a great guy with a lot of ideas, talent, energy and excitement. I also found out many years after meeting him that he happens to be a member of one of the oldest families in England. In fact, on one of my first jobs, I played one of his antecedents in Richard II.

Am I correct in saying that George’s voice is your own natural speaking voice?

Pretty much. I usually try and do something vocally different for voice work but when I saw the size of the script, I realized we were going to be working long days and with this kind of load, I would very likely start to loose whatever dialect or colour I tried to assume.

How did the recording process work? Did it differ at all for the sequels that followed?

The original Broken Sword took two 6 day weeks of roughly 10 hours per day (I had originally been booked for one 5 day week). The other episodes took no more than a week.

What are your personal thoughts on George as a character? Do you share any similar personality traits with him?

I have been asked this before and my answer remains pretty much the same. He’s a great guy, great in a clutch situation, strength of character, good looking, perseverance and a very ready wit. I have the perseverance thing and I can be funny – sometimes –  but that courage thing, facing guns and bad guys, life and death situations…? Not really me. Of course with all the do-overs, maybe we could all be like George.

You have returned to voice George for each subsequent sequel. Are sequels something you were always open to?

You know, when I first did this, I had no idea there would be such a demand for these sequels. I don’t think any of us did. When the first one was such a success and I was asked to do the second, I was very happy to do it because I had grown very fond of George and the production team were great. It was and remains a pleasure to make these sequels with this group of people. It is also nice to be a part of something that so many people seem to enjoy so much.

How easy is it for you to return to the role after an extensive period of time?

I have a pretty good feel for George now. However, I always go over previous episodes before I start the new one. 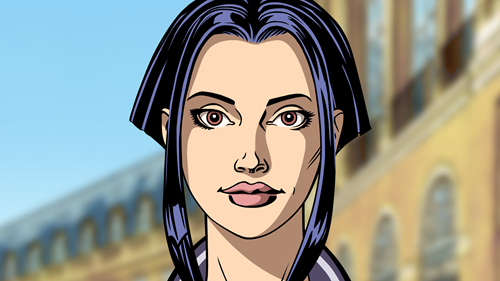 NICO! …but Anna Maria was saweeet.

Have you ever been to Paris in the Fall… or during any season for that matter? 😀

Yes I have. Fall, winter, spring and summer, an absolutely beautiful city where I have spent many happy times – both professionally and personally.

George carries a lucky piece of coal around in the games. Do you carry any good luck charms of your own?

Nope, yet another area where we are very different.

I know you may not be able to comment fully at this time, but do you think we will be seeing another sequel in the near future?

I believe there will be another (last instalment?) but that’s all I can say for sure.

Broken Sword and Broken Sword II have both been re-released recently for a wide variety of gaming platforms. How does it feel knowing that these classic games are being rediscovered by gamers so many years later?

How can that be anything but good?

Have you played the Broken Sword games yourself? If so, which is your favourite and why?

I hate to admit this but I am not very much of a gamer nor a very good one. I played the first two games, badly – very badly – embarrassingly so.

Have many Broken Sword fans contacted you over the years?

Yep, quite a few, there is a very large fan base for Broken Sword and they have been very generous in their support.

You have starred in several major Hollywood films including Saving Private Ryan, Tomorrow Never Dies and Mission: Impossible. What is it like working on these sorts of projects?

Great. Working with some of the best actors, crews, directors and producers in my business is about as good as it gets.

You have also worked extensively in television and theatre throughout your career. What have been your favourite projects to work on within these mediums?

It sounds evasive but I have been very lucky in that I have enjoyed most of my jobs and I have been able to work in pretty much every medium available to me as an actor. There are so many that have meant a lot for very different reasons, it would be very difficult to pick them out.

What is your favourite medium to work within overall and why?

I would hate to have to give up any of them for any length of time as there are aspects of each that are very attractive but which also present challenges. With voice work, all you have is your voice and you cannot have the aid of your physicality in telling a story. However, as well as that being limiting in some ways, it can also be a very liberating factor.  For example, I can play George, something I would never have been able to do had it been a visual medium. TV and film are similar in playing styles although there is usually more production money for a film and therefore more time. Theatre I guess would be my favourite. It is the hardest and the scariest but the most rewarding as well.

What’s next for you Mr Saxon?

Just finished a play and I’ll be doing a film (Cookie’s Chance) in June and then back to the UK.

Thank you for your time! I am a huge fan and it has been an absolute pleasure to speak with you.

It has been a pleasure, Marty, an absolute pleasure. All the very best and congratulations on your website’s recent anniversary!