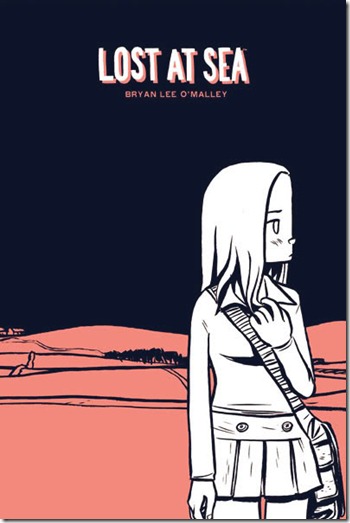 Canadian writer and cartoonist Bryan Lee O’Malley stated in his third ever graphic novel that ‘his only goal in life was to become rich.’ The book in question was the second instalment of the smash-hit series of Scott Pilgrim graphic novels. Joking or not, the Pilgrim series and the Edgar Wright adapted film have surely and undoubtedly made O’Malley a very rich man indeed. However in 2003, a year before the glitz and glamour of Scott Pilgrim, O’Malley introduced us to another character, in his debut book Lost At Sea.

Raleigh is eighteen years old and, like a lot of people her age, is facing adulthood in the eye. She feels lost and confused. But, unlike most, she doesn’t have a soul. Or at least that’s what she believes. No, there’s no doubt about it. As far as Raleigh is concerned, she has no soul. Why? Simple. Her mother sold it the devil in exchange for a successful career and subsequently, the devil placed it in a cat. Naturally. As absurd as that sounds, it is the centre piece to a much larger, rather serious and touching coming-of-age story.

Lost At Sea follows the shy and withdrawn Raleigh as she accompanies three fellow high-school students (Ian, Dave and Stephanie) on a road trip across America. However, this meeting happens only by chance, when Raleigh misses her train home to Canada after visiting her father in California. This chance encounter and the ensuing adventure prompts Raleigh to muse about life and her relationships throughout the long journey. Initially distant towards the three friends, Raleigh gradually finds herself opening up and bonding with the others, confronting elements of her past and making a few self-discoveries along the way.

Fans of O’Malley’s other work should be right at home with Lost At Sea. The stand-alone title carries a lot of the charisma and humour which makes the Scott Pilgrim series so charming and endearing, although the laughs and especially the more fantastical elements are less central here than they are in the Pilgrim books. There are some laughs and plenty of quirky dialogue, primarily generated by the interaction of the three friends Ian, Dave and Stephanie, but the story is more on the serious side and darker than the rollercoaster fun ride of the Scott Pilgrim series. Despite all the talk of the devil stealing souls and putting them in cats, Lost At Sea’s feet appear to be very much placed in modern day reality. 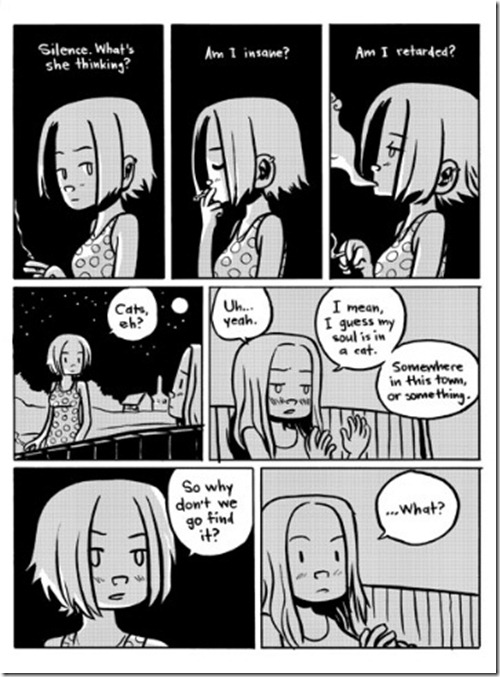 The story is told through the eyes of the serious and angst-ridden Raleigh, and is written more or less like a letter or a journal. For the majority of the book she is recording her inner thoughts and insecurities for herself, but often addresses a character called Stillman. We don’t learn much about Stillman, but we do discover that he and Raleigh had a romantic past, one she yearns to hold on to and has trouble letting go of. She also writes about her past and present life and history, narrating and reminiscing over past experiences and relationships with friends and family. Most of all, she muses about her own character, trying to make sense of herself, the situation she finds herself in and most of all, trying to understand why she is the way she is.  Raleigh also addresses a problem she has with cats; they just won’t leave her alone, even appearing in her bed.

These inner monologues – as well as Raleigh’s voyage into her mind and soul – take up the bulk of the story but are intercut throughout with the present day situation and the plight of her friends as they attempt to find their way home to Canada, involving stops at restaurants, motels and even a cat-themed shop (more cats). This is where the book comes to life. Raleigh’s memoirs unfold slowly and it is fascinating to gradually see her peel away layers of her character as the story progresses. She deals with the same issues that most eighteen-year-old people deal with – other than the cats of course – and despite her bizarre circumstances, it’s easy to relate and sympathise with Raleigh.

Still, the narrations do tend to come dangerously close to droning and seemingly endless, ‘woe is me’ speeches, which I found particularly harmful to my relationship with Raleigh. But the interlinking story with the road trip and the group always comes in at the right moments and brings the story back to reality, where the atmosphere is slightly more upbeat and humorous. As Raleigh self-loathes and complains about her inability to have any kind of relationship with anyone, the three friends are living in each other’s pockets, often arguing, but genuinely enjoying each other’s company and friendship, sharing jokes and friendly banter. Interestingly, we often learn more about Raleigh through these third-person moments and via her interactions with the others than we do through her inner-thoughts. It’s a shame that we aren’t given the chance to delve deeper into each of the other characters, as they embody a lot of the charm and spirit of the story. Instead they boarder on being two-dimensional, late-teen, hipster stereotypes.

The narrative unfolds slowly, really only picking up the pace in the final third. Because of this, it’s easy to get the sense that nothing is really happening within the first two thirds; it’s just four friends on a never-ending drive, with Ian even admitting that he was ‘just driving aimlessly.’ At times this annoyed me, I wanted Raleigh to get to the point of her speeches and for the friends to do more than just drive, eat, talk and sleep. But that’s all these characters have to keep themselves occupied for best part of the book; the friends themselves even begin to get frustrated about it. It’s no surprise that the final third speeds up dramatically when Raleigh finally allows herself to open up and a spanner is thrown into the works, breaking up the mundaneness of the situation. Still, the climax to the story unfortunately feels slightly rushed.

The art itself is rather clean and nicely simplistic, with a lovely use of blacks and greys. O’Malley uses much larger panels than he did in his Scott Pilgrim books, using a lot of space rather than squeezing in the details. Although there are slight stylistic differences, his style and authorship jumps out from every page, whether it’s certain looks of the characters, their clothes or even the way they interact with each other. Even if you didn’t read the cover, you would still be able to tell that this is a Bryan O’Malley book. That speaks volumes for a writer who is still in the early days of his career, despite his fame.

Lost At Sea is a coming of age story about self-discovery, friendship and the transition from adolescence into adulthood. It teaches us that we’re not alone in any of our troubles or experiences. It is thought provoking, often very funny, yet emotional and poignant, with a touching ending that will make readers smile. Although it does tend to drag in places it is still a very captivating and unique book, which is easy to read too, clocking in at just 160 pages. It’s a shame that it hasn’t received the same level of recognition that the Scott Pilgrim books have, because the quality of Lost at Sea is definitely on par with it’s more famous siblings. Bryan O’Malley and Scott Pilgrim fans will undoubtedly enjoy themselves.

All in all,  although Lost At Sea may not be everyone’s cup of tea – it seems to be aimed at a more young adult audience – it remains accessible to anyone who enjoys character driven stories and is able to handle a bit of teenage angst. Best of all, it’s something you can pick up, read quickly and perhaps even come away from feeling rather inspired. You’ll know what I mean if you read it, and read it you should!