GAME REVIEW – Back To The Future: The Game – Episode 2: Get Tannen! 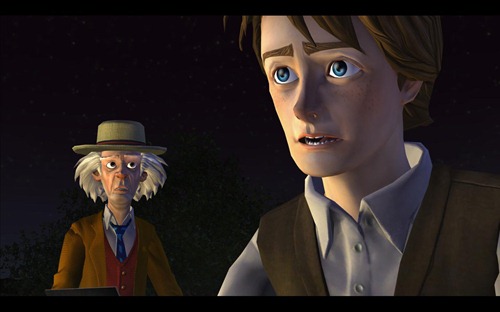 Back To The Future: The Game returns this month with Episode 2: Get Tannen! In my review of Episode 1: It’s About Time I described it as “a film-to-video game adaptation done right” and Episode 2 undoubtedly builds upon these solid foundations. However, I also speculated that many players would be “hoping for a greater challenge across the board in future episodes”. Therefore, I approached Get Tannen! safe in the knowledge that the overall experience would be fan-pleasingly authentic, but also hoping deep down that the gameplay would be far more substantial this time around…

Episode 2  picks up directly where Episode 1 left off, with Marty beginning to fade out of existence after unwittingly causing his grandfather (Arthur McFly) to be killed by Kid Tannen. After successfully evading Officer Parker of the Hill Valley Police Department (Marty’s girlfriend Jennifer’s grandfather!) with the help of the Doc, Marty jumps into the DeLorean and heads back to just before everything went horribly wrong in 1931.

The storyline is undeniably solid and involving from the moment the opening credits roll. However, Get Tannen! does itself an immediate disservice by largely removing player input during the opening sequences. Whether Marty is creeping around the DeLorean to evade Officer Parker, hiding behind a tree to avoid himself, or crouching behind a speakeasy bar whilst trying to rescue his grandfather, the core gameplay feels drastically dumbed down. Interactive cutscenes can work well when used sparingly, but I would hazard a guess that nearly a third of Episode 2 is over before players are able to roam freely between locations! 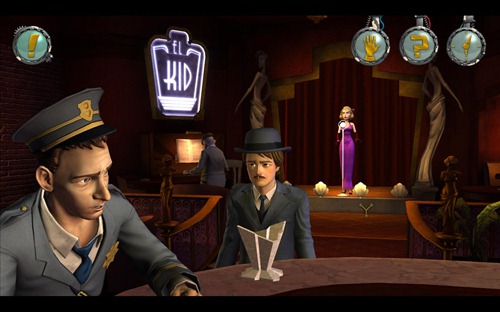 This is of course a touchy subject. By limiting player input to a certain degree during what are essentially stitched together cutscenes, the narrative is delivered at a more cinematic pace. However, as an episodic game by its very nature results in several smaller games, it can feel somewhat frustrating to have an extensive period of time where you are basically just pressing a button to watch pre-determined events unfold. Episode 2: Get Tannen! is one of the shorter episodes Telltale have released in recent memory, resulting in an experience that is pleasing to watch and listen to, but that lacks juicy gameplay meat on its beautiful Back To The Future licensed bones… at least to begin with.

Soon enough, Marty returns to the Hill Valley Courthouse Square – this time at night – and everything returns to normal. This type of effortless adventuring is what Telltale specialise in: it’s what they do best. Although this central location was of course featured extensively during Episode 1, they manage to keep things fresh by offering new areas to explore, such as an illegal speakeasy and the inside of the Majestic Arms Inn. Sure, the puzzles still lean more towards the easy side – Einstein is already being overused as a super-sniffing puzzle solver – but everything unravels at a pleasingly brisk clip and it is nice to be finally back in control of Marty.

Sadly, I did experience several bugs during my initial playthrough of Get Tannen! Although some characters remembered my fake name selection from Episode 1 (I chose Michael Corleone) most characters insisted on referring to Marty as Davy Crockett instead. Also, even though new character Trixie Trotter was an absolute blast to watch perform onstage, her singing seemed to randomly force subtitles to display on screen (even thought I most definitely had them turned off via the options menu). Finally, having the shadows turned on halfway resulted in some ugly graphical bugs, whilst having them turned on fully would cause random bouts of severe slowdown. I have never had any trouble running other Telltale games at full settings, so it makes me wonder what has changed behind the scenes to cause these issues…

I appreciate that a lot of what I have said about Episode 2 must seem quite negative. However, I must also stress that despite the easy difficulty and short completion time, Get Tannen! is just as enjoyable as Episode 1: It’s About Time, if not more so. In many ways, when combined they both feel like an extended, continuous episode. The storyline has been nailed and nobody else can do adventure games quite like Telltale can: the voice acting and character designs alone are absolutely superb.

The storyline has gotten even better here too, with plenty of time travelling conundrums to ponder. Furthermore, the ending is a triumph, strongly suggesting that Episode 3: Citizen Brown is going to blow player’s minds. Ultimately, what lets Get Tannen! down is its easy difficulty combined with its short completion time and my final score must reflect this: Episode 1: It’s About Time undoubtedly offered  a more well-rounded experience. The overall experience that Get Tannen! offers is still fantastic… there just needed to be more of it. I can only hope that next episode the puzzle design matches the high quality shown in every other area. Otherwise, Back To The Future: The Game could be in danger of becoming an interactive movie instead. Regardless, this is an enjoyable second episode that should hopefully pave the way for true greatness further down the line.