Doug TenNapel is a man who has accumulated many fans over the years, for many different reasons. For starters, he created cult video game character Earthworm Jim in 1994. He then went on to create the cult classic PC adventure game The Neverhood (in collaboration with Dreamworks Studios) in 1996. Nowadays, he simply creates fantastic graphic novels. I was recently lucky enough to catch up with this multitalented individual and ask him a few questions for AMO’s readers. Enjoy!

Hey Mr TenNapel! Can you tell our readers a bit about yourself please?

I’m 6’8” tall. I’ve been married to the love of my life for 20 years and have four children ages 3-8. I’m a Christian. Those are the big things. On the side I’m also a deadly force in the world of transmedia entertainment.

You started out as an animator, right?

I started with a love of animation. That doesn’t mean I could animate. I loved comics and monsters and drawing for as long as I can remember. Learning animation was something  I had always dabbled in, but I got into it more and more as animation jobs started popping up in the early 90s. 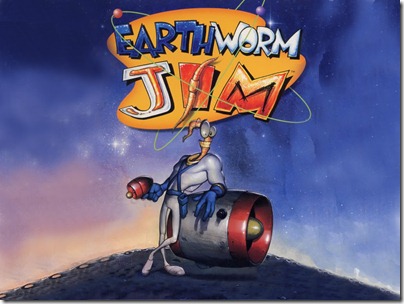 This then continued with a career in video games! How did the idea for Earthworm Jim come about?

Earthworm Jim is my own love letter to Looney Toons cartoons and Tex Avery shorts from my childhood. I liked Bugs Bunny and Tasmanian Devil’s proportions, bulging eyes and exaggerated humanity. My big brother is named Jim. I love the name Jim. I’m a big Jim Kirk lover so it made sense to give my ding bat worm hero that name.

How much input did you have into the Earthworm Jim series as it continued?

Little to nothing after the TV show and the second game. Since then, the character has been ruined and there have been great efforts by Interplay to involve me with the character again. I think the future could have great incarnations of Jim! 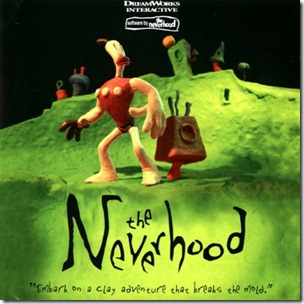 1996 saw the release of The Neverhood, a cult classic (one of my favourites!) even to this day. Was this a fun project to work on?

It’s by far, the funnest project I’ve ever worked on. Puppet animation was always a dream medium for me to work in. I just always thought it would be in film. But the technology was just at a point where we could do some great puppet animation on the PC.

Are the recent rumours of a film based on The Neverhood true?

The rumours were based in the fact that we secured the movie rights and pitched the movie idea around town. But nothing happened with the movie and it’s dead. I still get hundreds of emails from Russia about the project so we need to find a Russian millionaire to fund the movie!

Of course, many fans will now know you as a graphic novelist. Is this now where your main focus as an artist lies today?

Yes, but it’s solely out of necessity. I still like other mediums of entertainment, but graphic novels offer me complete freedom, they don’t break the bank to make one and I can be done with it after about a year of work. 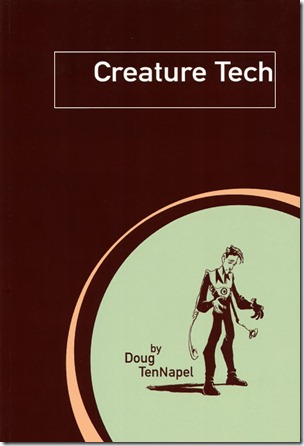 I was first introduced to you when I bought Creature Tech, which I loved: it got me into graphic novels, so thank you! How does the process of creating black and white panels differ from a full colour graphic novels? I notice most of your work is done in black and white…

I prefer black and white. I always say that if you do black and white right you don’t need colour. But recently most of my work is going to be in colour and that’s purely to draw  a broader audience and a more mainstream readership.

Again, are the rumours of a Creature Tech film true?

I sold the rights. There are always people hovering in and out of the project. But there is no production planned right now. I need to find a Russian billionaire to fund the live action movie.

What inspires you as a writer?

I love a good story. It’s a lot of fun to be trusted by an audience to spend a little time together. I’m on trial at first, because they give me their attention and I haven’t given them anything yet. By the end of the story, I want them to tell me, “That was time well spent.” I love that feeling that I got to take someone on a journey. I made a case for a few things, let them see some monsters and made them feel things they may not have felt before.

Do you ever get writer’s block?

Some of your graphic novels are far shorter than others: does time available for any given project dictate the eventual length? Or is this more to do with the story being told having a natural narrative arc?

The length of the graphic novel is dictated by two constraints. One is that I can’t afford to render every moment in a story. I probably should, but I don’t. The other is that some stories really are more complicated and just need more acreage to pull off. I do let the stories tell me if they will be a long or a short story. 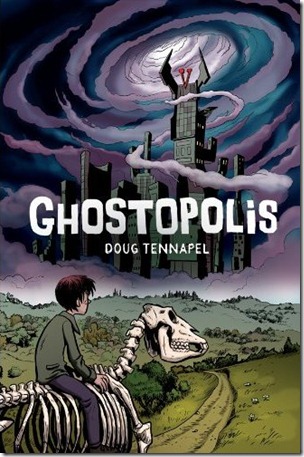 How does religion factor into your work?

You simply can’t separate me from my religion any more than you can separate me from being an American, being tall, or being an artist. It factors into my work the same way that it factors into my life. It’s not that I have to pump religion into everything I do, it’s already there. In fact, if I wasn’t religious I may not have even survived long enough to be here. You could ask the same about me as a male, an avid reader of philosophy or a family man.

Would you say readers of any faith can still enjoy the messages portrayed through your creative output?

Absolutely. In fact, I know that about half of my readers either don’t subscribe to Christianity or are outright hostile to it and they still enjoy my work. Some even hate the portrayal of Christianity in my work and still love my work! It’s no different than me loving the work of people who don’t have my world view. I devour music, literature, philosophy and movies from gays, atheists, drug addicts, scientists and Mormons and it may hamper my enjoyment, but it can’t remove the beauty that is present in most good works.

In fact, beauty is pretty rare even in works of people who share my faith so I’d starve if I didn’t look for it in the work of authors who did not share my world view. Many members of my audience still enjoy my handling of faith, without embracing the faith.

What other themes would you say run throughout your work? Can you give any examples?

It’s hard for me to describe what I’m doing in my own stories because it’s a lot easier to do than to identify the sources. But in most of my work you will find prodigal sons as well as prodigal fathers. You’ll find a love to animal anatomy, particularly of weird critters like insects, crustaceans, amphibians and molds. I usually have desperate romances where a crippling attribute of one person is ignored or seen as a strength by the other. I often see God or fate as just another character in my stories.

What is the typical process from A-Z when you begin to create a new graphic novel?

The first thing I do is pick a genre. These are broad ideas and probably what you might think about after first seeing the title and glancing over the main characters of the story. I’m always creating new, creative skins, to wrap around old, traditional characters and story lines. I work a lot on a whiteboard and note-cards. When I’m at the beginning stages I feel like a detective asking questions and trying to shake out facts. I’m usually looking for a moral or reason for the story to exist.

My favourite book is still Earthboy Jacobus. I still like sci-fi comedy as a genre. It’s full of philosophy, but isn’t ice cold like most sci-fi. It’s like a mixture of pedestrian values with high Modernist philosophy.

Have you ever considered sequels to any of your books?

Yes. I’d love to do sequels to my books. In general, I like creating new stories just a little more than the idea of making sequels. I’m in the middle of working out a number of sequels for Ghostopolis because that was always imagined as a multi-book epic. Earthboy Jacobus would do well with a sequel, too.

What other graphic novels do you rate?

I read Hellboy and Bone.

I hear you are also a musician? 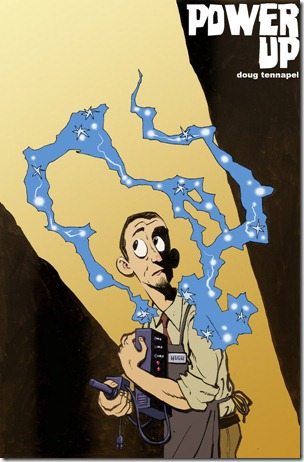 I loved your latest book, Power Up. Was the storyline intended as a subtle wink towards your game development past? Are you a gamer yourself?

Power Up is my tribute to my gaming work. It goes into what it’s like to be a working man and trying to put your dreams into action while surviving on less than desirable jobs. Most people in creative fields of work know what it feels like to be in an uncreative job. I don’t think there’s anything wrong with uncreative jobs, but I see most people who work in them have really good ideas and big dreams and their work place just isn’t going to be where they’ll be able to express them.

I’m not much of a gamer because when I own games it’s all I do. The fact that I have a family and a job is proof that I don’t have a gaming system. If I was single, I’d just live on World of Warcraft and never go outside until I was rendered homeless. You could say that I love games too much to play them. 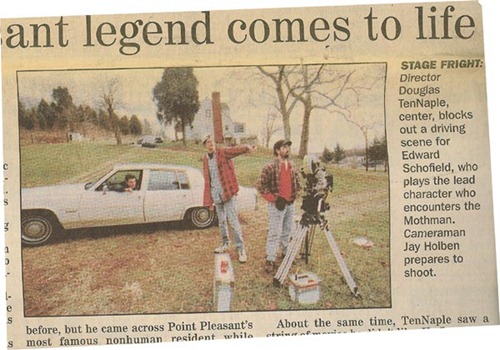 Will your feature film, Mothman, ever be revisited and completed? What happened there?

Long story, but it’s just a hard film to finish. We’re close to a DVD edit that will be about 20 minutes long. That will be the end of it… And even then, it’s the movie that doesn’t want to be finished!

What is next for you Mr TenNapel?

I’m working on a new graphic novel that will likely come out in 2011. I can’t talk about it, but I have a 75 page script and probably about 80 pages thumb-nailed. I’m really digging it.

I have been writing an animated sitcom pilot that I hope will be finished by next year too.

Power Up was recently noted as one of AMO’s best books/graphic novels of 2009. Doug’s latest book, Ghostopolis, is due for release later this year.

6 responses to “INTERVIEW – In Conversation With Doug TenNapel (Graphic Novelist)”