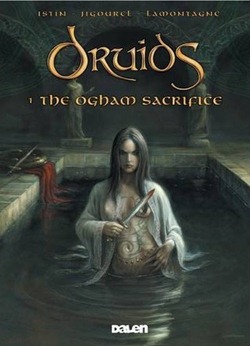 Druids 1: The Oghmam Sacrifice is a graphic novel that has just been released by Dalen Books (publishers of Celtic graphic novels in English and Welsh). They describe it as:

The first volume of a gothic thriller set in the Age of the Saints. There is turmoil in the 5th century Celtic periphery of Europe – an age of change at the end of the Roman Empire and an age of conflict between peoples and religions. Oppressed by Saxons to the east, many of the Celts of Britain have colonised Armorica in Gaul. Gwynlan, the last of the Druids, is caught in a mysterious battle for survival against the monks of the church. Accusations of depravity, murder, sacrifice and sorcery are rife, but the old gods are at hand to assist the righteous.

I would describe Druids as a graphic novel that I started to read with some interest, before being totally sucked in and enthralled. This really is a little gem!

As mentioned in the above publisher synopsis, the first book tells the tale of Gwynlan. Here, as the last of the Druids, he is desperately trying to prove that his people are not responsible for a series of gruesome murders taking place against the Christian monks.

The artistry presented on every single page is quite simply beautiful. It  really gives you a great taste of what 5th century Celtic Europe must have really been like. It should be stated straight away that this graphic novel is aimed at late-teens/ adults, containing images of bloodshed and nudity.

However, non of the above is necessarily a bad thing in this context. I found the whole story rather tasteful in its approach to a quite serious subject matter, and the highest accolade I can give it is that, although I am not really a fan of tales from so long ago, this one sucked me in from the get-go.

The book features some instances of Gaulish, the ancient Celtic language of Gual. Rather than this creating a barrier between the reader and the author, I felt it solidified their connection substantially. Much of the settings and characters from this tale are based on Celtic culture, historical chronicles and folk memory. It really shows!

The effort to make the book have an air of historical accuracy really sells the danger of the times, and makes the more fantastical elements of the story still seem rooted in reality.

It is hinted at early on that the increasing number of Christian monks being murdered only appears to have been committed by the Druids. During such religious times, it comes as no surprise that somebody would want the Druids out of the picture.

The idea to have Gwynlan and his young apprentice Taran called to the aid of the Christians by an old friend, the Christian leader Brother Budog (leader of the monastery where the murders are taking place) is a masterstroke.

On the one hand, our protagonists are safe due to their connection with Budog. On the other hand, everybody else is sure that the Druids are responsible, causing tension and distrust with every encounter. This is only further heightened by the differences in religion between the Druids, the Celtic Church and the Mother Church in Rome.

The book also shows much travel by boat, including the beautiful yet dangerous city of Ker-is, a Breton City now said to be lost beneath the sea in modern times. Here (in 5th Century Celtic Europe), it still stands tall, huge gates holding back the eager waves, and also any incursion by the new religion. 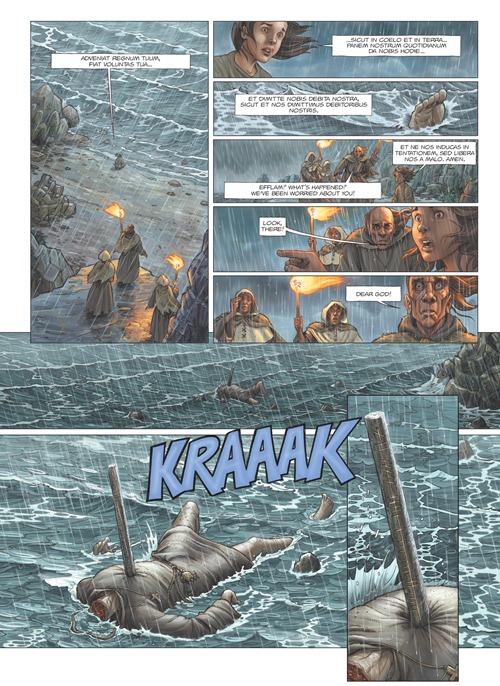 Yet surely the greatest thing about this book, besides the beautifully written text (perfectly translated from Welsh), stunning artwork and the mighty Gwynlan, is Princess Dahud. Beauty and the beast all rolled into one, she is a truly sexy, frightening, refreshing female antagonist that often made me shiver. She is brilliant and I hope she returns in the next book! (Druids is planned as a trilogy).

Overall, I really enjoyed this book and couldn’t recommend it enough. It is perhaps slightly too short (at just under 100 pages) but this is a common complaint of mine when it comes to fantastic, engrossing graphic novels that you can’t put down, and shouldn’t be taken as a serious criticism. All I need from the next instalment is more action (and sword fights!) to go alongside the strong storyline and then I will be more than satisfied!

We hope you enjoyed this review! You can also visit Dalen Books’ homepage here, or purchase the book from Amazon.co.uk here.