GAME REVIEW – Back To The Future: The Game – Episode 4: Double Visions 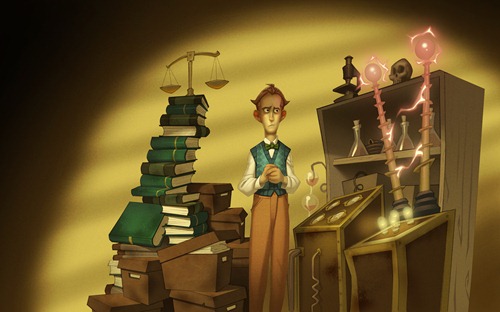 The penultimate episode of Back To The Future: The Game has arrived! Episode 4: Double Visions begins with Marty McFly still trapped in an alternate 1986 Hill Valley where time travel was never invented. What’s worse, Edna Strickland has gone completely insane, determined to wipe Citizen Brown’s mind! Can Marty break out of prison, save the Doc, travel back to 1931 Hill Valley and fix the timeline before it’s too late?

This month’s episode is by far the most difficult I have had to review yet. Last month, Episode 3: Citizen Brown blew me away despite its faults. The change of location felt fresh, the puzzles were well designed (if not a tad too easy) and Claudia Wells’ return to the franchise as a punk-rock version of Jennifer Parker was delightful. I had a feeling this month would struggle to top that effort and sadly, I was correct. Double Visions is more of a stumble backwards than a leap forwards.

Although the opening cutscene surprised me with its brevity (I’m playing already?!) the initial location was a strong one. The idea of Marty being stuck in prison, having to engineer his escape with the help of a Citizen Plussed Jennifer and surveillance-wiz George McFly – the eye in the sky – really excited me. However, this soon proved to be a very small slice of the overall episode, much to its detriment. I really do believe that this concept was wasted: the breakout is a walk in the park and ends before it has even begun.

Instead, Marty soon finds himself back in 1931 Hill Valley once more, which is this time completely closed off. I tried running to a previous location before I realised that the game was actually tunnelling me between the Town Hall and the barbershop across the street! I can’t quite describe how frustrating this actually felt: why not just make this moment a cutscene if all I can do is run in a straight line?! It soon turns out that you can’t explore this location at all. Instead, the majority of the game is spent between two new locations. That’s right, two.

One location is Emmet’s workshop. Here, Marty must devise a plan to ruin young Doc’s new threads – a pristine white suit given to him by Edna – and also find a way to botch his mental readout so that he is no longer considered a ‘model citizen’. The other location is the Hill Valley Expo, which consists of five characters – one of whom is actually non-essential – and two display stands. The Hill Valley High School in the background, complete with a man guarding the entrance, gives the illusion that the Expo is taking place inside and Marty will later gain entry. Much to my dismay, this never came to pass.

Even worse, the overall polish is a step down this month too. Marty only has to walk in the vicinity of Trixie Trotter for a conversation to initiate. The same conversation. Over and over. Players will find themselves going to click the street to travel to Emmet’s workshop and instead ending up talking to Trixie, time and time again. Also, at one point Trixie sends the player on a fetch quest and will constantly ask Marty if he has the items she asked for, to which he will reply “not yet” even when he has them all in his inventory! Nothing game breaking of course, but still very frustrating. The worst offender by far has to be a green bulb that players will find themselves waiting to light up. What triggers this green light? Who knows! The hint system seriously struggles to offer any clear guidance too, causing further annoyance.

Thankfully, It isn’t all bad news. The relationship between Marty and the Doc – both young Emmet Brown and old, alternative reality Citizen Brown – is pushed to the limit in some new and exciting ways. Citizen Brown isn’t quite the Doc we all know and love: he has no emotional investment in Clara or his unborn children. Instead, he still cares for Edna despite what she tried to do to him in the alternative 1986. Meanwhile, young Emmet Brown is slowly starting to realise that Marty is sabotaging his life with alarming regularity… In short, Episode 5: Outatime could still be a knockout if it builds upon these tantalising plot elements and sees them through to fruition next month.

The final moments and the promising cliffhanger ending just about save Double Visions from being a total disaster. The central characters are undeniably brilliant – although Jennifer Parker is sorely missed – and it is difficult not to care about what is going to happen next. Also, the puzzles seem to have gotten slightly more difficult and the overall experience remains fun, if not a pretty big step down from the previous three episodes. The highlight this month is probably young Edna: I actually found myself feeling sorry for her and understanding, if not entirely agreeing with, Citizen Brown’s paradoxical dilemma. Regardless, this is the weakest episode so far; if you aren’t a relatively strong Back To The Future fan, you will probably want to knock a point off my final score.

5 responses to “GAME REVIEW – Back To The Future: The Game – Episode 4: Double Visions”