GAME REVIEW – The Walking Dead: Episode 4 – Around Every Corner (PC)

The Walking Dead: Around Every Corner is the fourth episode of a five-part episodic video game based upon Robert Kirkman’s The Walking Dead series of comic books. Lee Everett and his fellow survivors arrive in Savannah, Georgia, to find that zombies aren’t their only problem – the group is becoming fractured and divided, Kenny is struggling to hold himself together and Clementine’s mysterious walkie-talkie ‘friend’ has a hidden agenda that will push Lee to breaking point and beyond. Welcome to The Walking Dead: The Game.

The penultimate episode of The Walking Dead: The Game beings shortly after Episode 3 ended, with our band of survivors walking through the deserted streets of Savannah. Their goal is to head towards the waterfront and find a seaworthy boat – but when church bells start ringing and every zombie in the city heads in their direction, they find themselves once again fighting for their lives against overwhelming odds.

Of course, zombie stories are only ever as good as the living characters that populate them. If you’re playing Episode 4, you’ll already be extremely familiar with Lee and his group from the previous three episodes.  Episode 3 was devastating on a number of levels – these are characters that have seen unspeakable things and been through situations that nobody should ever have to deal with. They’ve faced the walking dead, bandits, cannibals… and let’s not forget Lilly. Savannah, Georgia acted as a beacon of hope – but the reality is a living nightmare. 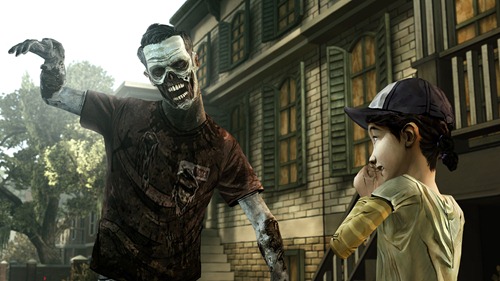 Telltale Games only dabbled with some basic shooting in previous episodes – this is an adventure game after all – and while Episode 4 is still all about decision-making and story progression, there is an increase in action. What comes as a pleasant surprise is that this action isn’t handled solely via quick time events. The shooting moments have been greatly improved and further increase the player’s involvement. Try pulling off numerous headshots against the clock when Clementine’s life is on the line – it’s nerve-racking.

As with every episode so far, Around Every Corner features a central location – a fortified house that the group hole up in. From this location, the various plot strands of the episode spiral outwards. Lee and Kenny must try to find a boat. The group must try to find supplies. It’s a clever set-up – playing as Lee, you’re always worrying about the situation back at the house when you’re somewhere else. It’s a constant distraction, especially when you have to consider whether Clementine is safer locked up with a gun in her hands or by your side. 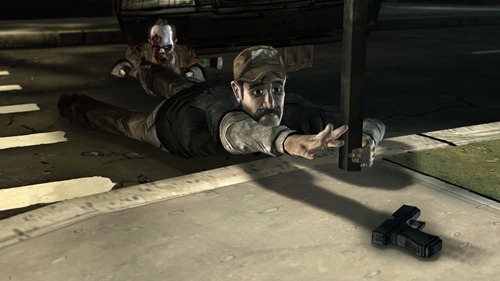 Perhaps it will be slightly different for other players – the experience of The Walking Dead: The Game is a tailored one after all – but in this reviewer’s experience, Kenny is a becoming a completely selfish bastard. The death of his family has turned him into a loose cannon that thinks of nobody but himself. Another character of notable interest is Ben – he keeps making mistakes, but whether or not you want to give him a second chance will ultimately decide his fate. Let’s just hope Kenny doesn’t find out about his deal with the bandits…

Episode 4 also features a new character – the mysterious Molly. A hoody wearing badass wielding an ice pick, her motives are murky and her loyalty lies firmly with herself. It’s refreshing to have a fresh face amidst the old familiar ones – especially when that fresh face is a zombie killing machine who can also scale buildings with ease. She only features briefly throughout Episode 4, but she will remain memorable for years to come. She gets all the best lines and steals the entire episode. 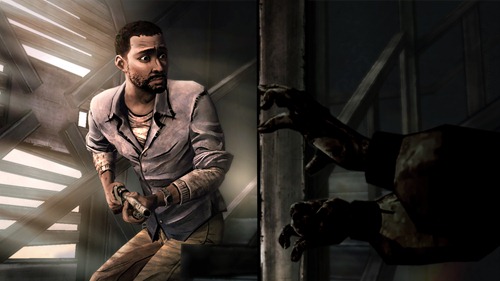 The Walking Dead: Episode 4 – Around Every Corner is another gut-wrenching triumph that drags the adventure game kicking and screaming into the 21st century. The story (written by Gary Whitta, the screenwriter behind The Book of Eli starring Denzel Washington) is particularly strong, although one character’s demise is perhaps dealt with a little too quickly. Episode 4 doesn’t possess the shock factor of the previous episode – poor Carley… or perhaps it was Doug for you? – but the decisions to be made are some of the most difficult yet faced. In the end, it all boils down to Clementine. The ending of Around Every Corner is a game changer that throws everything into doubt. I’m with Lee – we’ve been through more together than you can imagine.  Anyone who tries to get between me and her is gonna wind up dead.

6 responses to “GAME REVIEW – The Walking Dead: Episode 4 – Around Every Corner (PC)”