The Walking Dead: A New Day is the first episode in a five part episodic video game based upon Robert Kirkman’s The Walking Dead series of comic books. Developed by Telltale Games, the player takes control of recently convicted felon Lee Everett as he fights to survive the zombie apocalypse whilst protecting a little girl named Clementine.

Telltale Games has a proven track record for taking popular licences and turning them into original adventure games. The Walking Dead wisely chooses to use the comic books as its source rather than the equally fantastic yet notably different hit TV series of the same name, whilst remaining accessible to both audiences by carving out its own identity. This decision is a prudent one, allowing fans of the TV show to play without feeling alienated, fans of the comic book to play without feeling annoyance at any changes made and newcomers to enter the world without feeling like they’re missing something.

A New Day features an original storyline and a new cast of characters, with some familiar faces from the comics thrown in for good measure such as Glen and Hershel. As the game opens, former professor Lee Everett is being transported to prison in a squad car when a zombie suddenly lurches into the road. Lee awakens to find the squad car on its roof in a forested area at the side of the highway and the cop that was transporting him lying dead nearby. He manages to unlock his handcuffs just in time – the dead cop attacks him and the player must quickly load a shell into a nearby shotgun before it’s too late.

Fleeing from a hoard of zombies drawn to the sound of the shotgun, Lee ends up climbing over a fence and landing in the back garden of a house in a suburban neighbourhood. This is where the game begins proper. The player can move Lee around the environment (it’s nice to get back direct character control after the QTE-driven Jurassic Park: The Game) and interact with various hotspots. He soon teams up with an 8-year-old girl named Clementine, whose parents are most likely dead.

The relationship between Lee and Clementine is the driving force of the game. The player is immediately given a multitude of ethical and moral decisions to make and these only deepen as the game continues. The player is put firmly into Lee’s shoes. Should he tell people he isn’t actually Clementine’s father? Should he tell people he is a convicted killer? Most previous Telltale efforts would have made these decisions for you. This time, however, things are different. 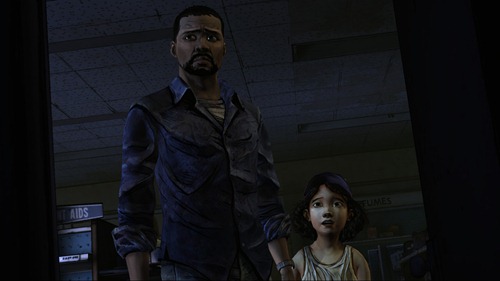 It’s this decision making mechanic that makes The Walking Dead the most ambitious game made by Telltale Games to date. The adventuring is solid and the QTEs feel far more interactive than those found in Jurassic Park – they’re also used sparingly and are therefore more exciting. Yet it’s the way the game lets you shape Lee that truly sets it apart. Your decisions have a real impact, influencing how those around you act towards you and in some cases deciding the ultimate fate of others. Even during regular conversation, you have to make snap decisions about what to say next. Telltale promises that these decisions will carry forward into future episodes and if they can deliver, each player should be able to enjoy a uniquely tailored experience.

From a technical standpoint, this is certainly Telltale Game’s most accomplished project yet. The graphics are presented in a 3D cell-shaded art style that is entirely befitting for the comic book universe the game cohabits. The voice acting is also stellar, with Lee and Clementine in particular sounding 100% authentic and real. Whether Lee is threatening to kick somebody’s ass or comforting Clementine, he always sound great and it’s a constant joy to hear him interact with the 8-year-old girl in his care. Sadly, there are a few audio issues at times that might be due to compression, but they are few and far between enough to be forgivable. Keyboard and mouse controls are serviceable, but this reviewer found that his Xbox 360 Wireless Controller For Windows worked best and would therefore recommend this as the preferred method of input.

The Walking Dead: Episode 1 – A New Day thoroughly exceeds expectations. It has plenty of zombies and gore, but it also has an abundance of heart. The bond between Lee and Clementine is so accomplished that it already brings to mind another iconic gaming duo, Ico and Yorda. Telltale has managed to make the characters shown on player’s monitors and screens actually matter and the decisions you make are heavily weighted as a result. The best thing about Robert Kirkman’s comics is the way in which he presents the human element amidst the horror – Telltale truly nail this integral ingredient. Although the 2-3 hour length is over far too quickly, there is plenty of replay value. However, it’s probably best not to make different choices until you’ve played through each episode at least once – the true enjoyment here is in making choices and sticking to them, no matter how difficult. The easiest choice is undoubtedly the first one you’ll make. Buy this game – it’s a killer.