INTERVIEW – In Conversation With Kan Gao (Freebird Games, To The Moon) 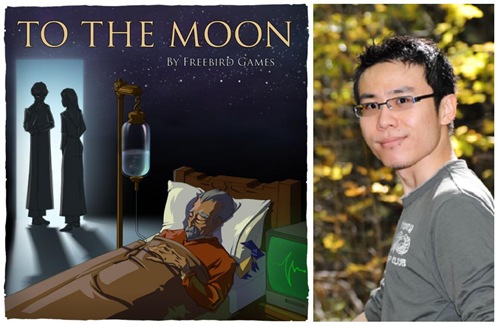 Alternative Magazine Online recently reviewed To The Moon, an indie RPG/adventure game created by Freebird Games, describing it as “yet another shining example of an indie developer, free from the shackles of a mainstream gaming studio, weaving pure magic.” AMO is therefore proud to present an exclusive online interview with Kan Gao, founder of Freebird Games and creator of To The Moon!

Hello Kan, thank you for your time and welcome to AMO. Can you tell our readers a little bit about yourself please?

Heya Martin, it’s great to be here! Sure thing; I’m just some guy living in Canada who was born some years ago. I enjoy composing, writing, and short walks on concrete beaches between meals. I also hold my chopsticks the wrong way.

When was Freebird Games first started and how has the studio expanded and grown since?

I started making games about 5 years ago, though it took a year or two before the “Freebird Games” name got attached to it. At one point I considered going by the label “Illusionist Entertainment” – ack, can you imagine that? *shudder*

Anyhow, I’ve been really fortunate to have gotten help from many talented people along the way via commissions and trades, though as far as dedicated “employees” go, it’s pretty much just me.

Can you tell us a little bit more about the team and its members? How many people worked on To The Moon for example?

I think about seven artists contributed to the graphical assets specific to To the Moon, as well as several others for the programming side of things. Laura Shigihara also kindly helped writing a special song for the game. Numerous public domain/royalty-free assets were also used.

Though overall, it was mostly just me working away in my room, while now and then knocking on other talented people’s doors begging for help.

What is the premise of To The Moon and where did the idea for the game come from?

To the Moon is about two doctors traversing through the memory of an old man to fulfil his last wish. The base concept originally came when my grandfather fell ill, and I wondered that when my time came one day, if there would be anything I’d regret. Along the way, it was shaped by numerous other events as well as films like Eternal Sunshine.

No particular year or country is mentioned – was this deliberate? Do these details even matter?

I suppose NASA’s mentioning would hint it to be in the US, though I would prefer for it to be in some alternate universe with its own history with some shared similarities with ours.

I noted in my review of To The Moon how it “evokes comparison with films such as Inception and Eternal Sunshine of the Spotless Mind.” Were these similarities intentional? Would you cite any other films, books or games as sources of inspiration?

I think Eternal Sunshine was definitely an influence, though Inception hadn’t even came out when the project was started. As for other media with an influence, I’d say Up, Memento, and The Hitchhiker’s Guide to the Galaxy (to some indirect extent).

I haven’t really considered what it really is, though I think adventure game is probably the safest answer. Probably more like an interactive story, though in a way that’s what many adventure games are anyhow, heheh. As for great adventure games, in recent memory, I think the Blackwell series and Gemini Rue are good examples.

There is certainly an RPG flavour present throughout the game despite its lack of turn-based gameplay. Are you a fan of old-school RPGs?

Certainly! Though many of the old-school RPGs I played back then were foreign. I loved playing through them for the stories, which definitely helped to shape what To the Moon ended up being.

How would you describe the characters of Dr. Eva Rosalene and Dr. Neil Watts?

They’re just a couple of common folks with peculiar jobs trying to get by.

Would it be fair to say that their contrasting personalities and beliefs are integral to the story of the game?

From a 4th wall perspective? Yes, I think it plays an important role in providing catharsis by offering different points of view. Also, who doesn’t love pointless and annoying bickerings that ruin the otherwise sentimental scenes? …Well, a lot of people, I suppose; but I sure do!

There is a moment in the game where Dr. Rosalene finds painkillers belonging to Dr. Watts in their company car – I believe this scene can actually be missed if the player doesn’t notice the bottle of pills and pick them up. What is the significance of this moment?

It’s something to be covered in the future episodes, though I think a few educated guesses can be made already.

Do you personally believe that Johnny should have kept his memories, or altered them?

It’s a difficult topic, but I think whichever choice he personally decides to take for himself is fine for his own case.

I also mentioned in my review how “the game deals with such tender topics as mental illness, financial storms, marriage, love and death.” Were any of these plot points drawn from personal experience?

Some are; and some were from experiences of others who are close to me.

The game also has a strong sense of humour – is humour important when dealing with such serious themes?

Probably not for everyone, but personally, I like being able to take in a serious story that doesn’t always take itself too seriously. It can go wrong in the other direction as far as pacing and timing go, though, and I think there are always things to be improved on in that department for the future episodes.

What engine was used to create the game? What benefits did this engine offer and did it present you with any challenges?

The somewhat notorious RPG Maker (XP). It was just the perfect engine for making something like this efficiently – it had all the tools I needed, especially considering the technical side of the game isn’t anything demanding. It does have the grave inconvenience of not being able to port the game directly to Mac & Linux, though. 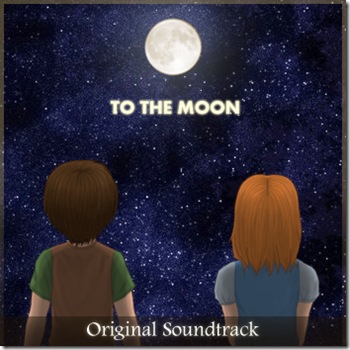 The soundtrack is beautiful and adds plenty of emotional punch to the game. How did you go about creating these songs and was it difficult overseeing so many different aspects of the project?

It was actually often the other way around – I’d get stuck on writing a scene, and then I’d go ahead and write the background music for it first. Then I play it in the background as I go back to writing the dialogues, and things flow. I think being able to be directly involved in these different aspects of the game actually helped with bringing everything together in an unified manner, and it wasn’t exactly a matter of technical difficulty as much as a time constraint.

The critical response to the game has been overwhelmingly positive – how does that make you feel?

It makes me feel like being wrapped in a self-heating Snuggie while being fed Skittles by a Leprechaun. But really, I’m really grateful for the positive general reception of the game so far – To the Moon’s my first commercial project as I take a step to try to make this what I do, and I can’t tell you how much I appreciate everyone’s support. I’ll try my best to not let anyone down with the future episodes.

The game actually made many players cry – I must admit that I myself became rather watery-eyed towards the end. What do you think it is about the game that evokes such a strong emotional response from players?

While there are some rather sad undertones of the game, I think the parts that got many people were actually happy ones… or maybe more accurately, bittersweet. I think it’s a theme that, to some extent, most people can relate to. Everyone has their own wish that’s somewhere far out there, with someone who’s had an effect on them at one point or another. So be it going to the moon or River, it’s something that’s familiar on one level or another.

The game states during the end credits that To The Moon is ‘Episode 1’. How many episodes are planned and will they all feature the same protagonists and premise?

Yep! The series will be based on Neil and Eva as they work with different patients, where each episode will be a different life story. It’s hard to say how many episodes there will be in total, though I do have a few anchor points planned that would set up the conclusion to the overarching story of the series as a whole.

What is next for you Kan?

I’ll probably go watch TV for a bit. But just in case you are asking about it project-wise, that’d be the series’ episode 2! I’m also planning on releasing a very brief (& free) bonus mini-episode about Neil & Eva at a New Year’s party.

Thank you for your time, it has been an absolute pleasure being able to discuss To The Moon with you!

Thank you for the opportunity, Martin! And I’m really glad you enjoyed the game. 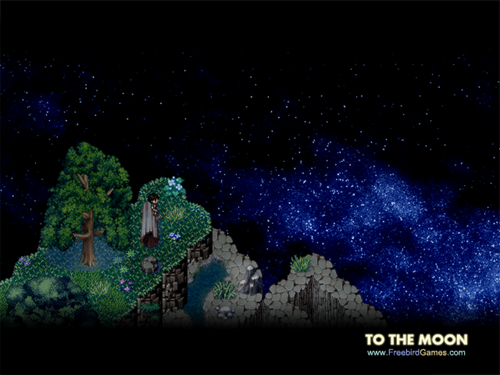 5 responses to “INTERVIEW – In Conversation With Kan Gao (Freebird Games, To The Moon)”