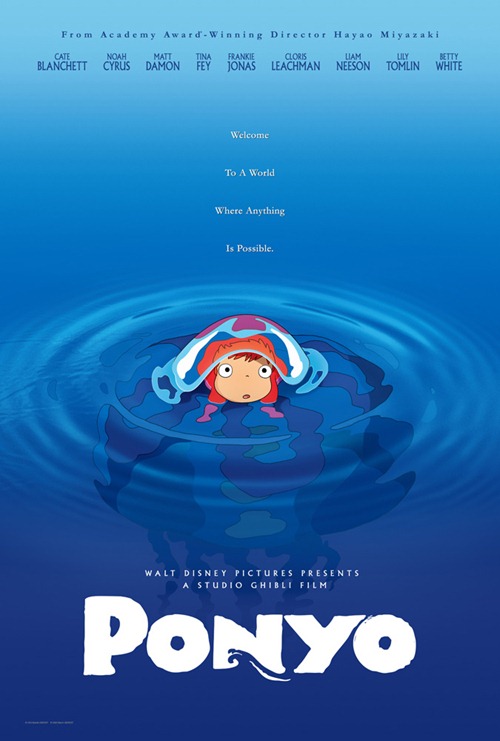 As a huge Studio Ghibli fan, it has been driving me somewhat mad knowing that Hayao Miyazaki’s latest animated feature film originally came out in July 2008 in Japan and was then released with an English dub in August 2009, but only in the US. It has only just arrived in the UK in February 2010! Frustrating to say the least. So was it worth the wait? 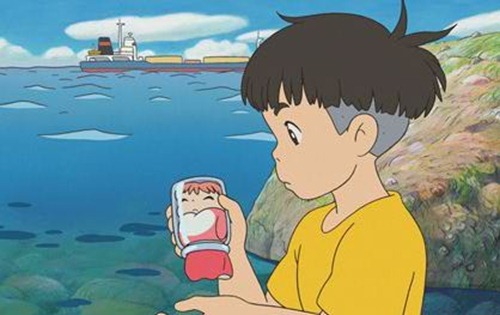 Of course! Ponyo is quite simply the most charming animation I have seen since… well, since My Neighbour Totoro! The film starts with a somewhat minimalistic shot of boats floating peacefully on the water beneath a full moon, before pulling us down into the sea beneath them and revealing to us a place of constant movement, creatures bustling all over each other, a hidden world alien to our own. Completely hand-drawn without any CGI… these sequences look astonishing, perhaps even more so than the watery delights of Pixar’s Finding Nemo. The sea in Ponyo feels incredibly alive and proves once more that nothing can beat traditional animation. 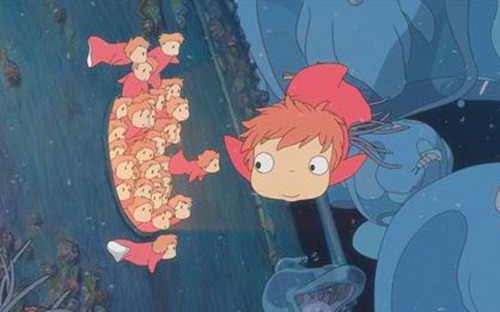 Ponyo herself is wonderful, taking many different forms as the film progresses. At her most basic, fish-like form she is charming and cute, spraying water from her mouth as she is carried around in a young boy’s bucket. Taking on a more human form later on (slightly reminiscent of The Little Mermaid) she becomes totally loveable, cutesy and even more mischievous. The animation lends itself to these character developments well: Ponyo is a constantly shift-shaping bundle of surprises that is experiencing the world with fresh eyes: as an audience, we become completely hypnotised by her total purity and lust for life as it explodes on screen. 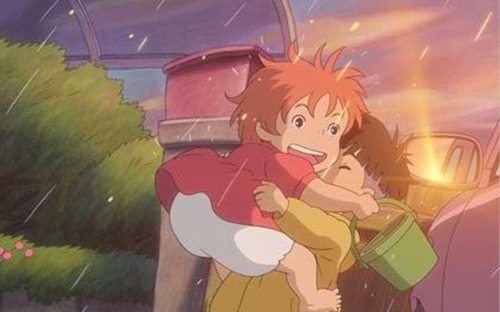 So what of the story? Well, much to my surprise the film is actually for once a true children’s film from the studio. There is very little in the way of story or plot in the traditional sense… and it works beautifully. Ponyo’s father (voiced by Liam Neeson in the English dub) is an underwater wizard. Her mother (Cate Blanchette) seems to be the life of the ocean itself, only coming into play later on. Sōsuke (Frankie Jonas) is a young boy who befriends a small fish-like creature he calls Ponyo. Sōsuke’s mother (Tina Fey) is strong and protective of her son. His father (Matt Damon) is always away at sea: a constant source of annoyance for his wife and one of pride for his captain’s hat-wearing son. 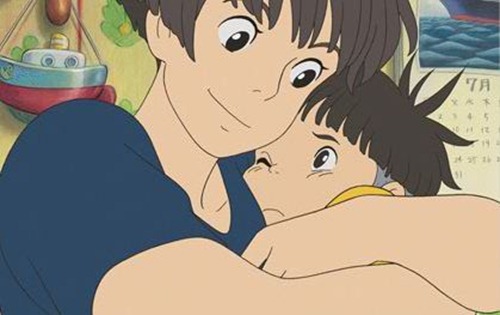 Ponyo (Noah Cyrus) naughtily escapes from her father at the beginning of the film, befriending Sōsuke. After this, her magic becomes stronger and she starts to use her powers to become more human because she wants to stay with her new friend (and not just in a bucket!) However, this starts to upset the balance of the planet, causing terrible storms, pulling the moon out of its orbit and even satellites from the sky! Only if Sōsuke proves his true love for Ponyo will the balance be restored. A simple story (far simpler than My Neighbour Totoro, which is the closest to Ponyo of the studio’s previous films) yet it still manages to drive the story forward and serve the animation well. 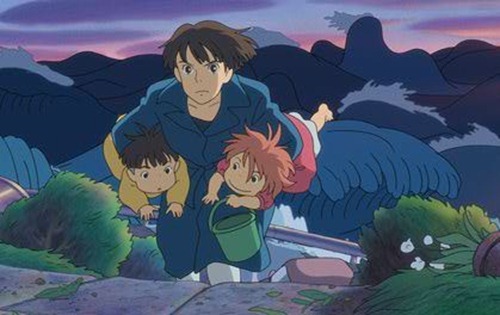 What would merely be filler scenes in other films become major set pieces here. Sōsuke’s mother Tomoko quite frankly drives like a madwomen throughout, showing both her confidence on the roads and her adaptation to the life she lives so close to the ocean, her husband always away at sea. Many Western viewers may find her portrayal shocking (you could almost call her reckless at first glance) yet I found her totally exhilarating. One scene where she is driving franticly back to her house away from chasing waves is an animated tour de force from Miyazaki that completely took my breath away. Our young protagonist Sōsuke looks out the back window the whole time, never afraid: he is too busy watching Ponyo running on the water, which transforms constantly into visions of writhing fish. Delightful! 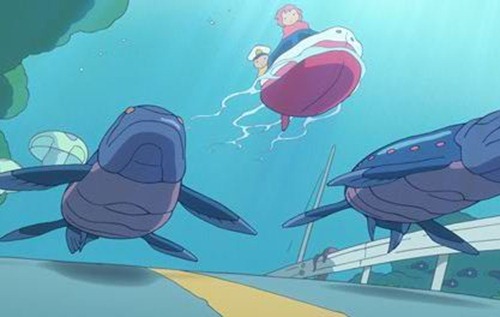 So where does Ponyo fall down? Surprisingly, in a way I never expected. My Neighbour Totoro (surely the one to beat from Miyazaki’s impressive portfolio) worked so well because the fantasy elements were ambiguous. Were the children simply making imaginary friends? The same applied to some extent with Spirited Away. In contrast, during this film Ponyo not only makes herself known to the adults, but interacts with them in ways that would raise many questions: Sōsuke’s mother doesn’t even raise an eyebrow when the fish her son has caught is suddenly a little girl. Later, several old women are taken down beneath the waves by Ponyo’s father beneath a giant bubble. This is what makes the film truly aimed at kids: things that will bother older viewers will matter little to the children in the audience. They will be too busy having the time of their lives, unquestioning of the little inconsistencies. And as I have already hinted at, the animation is so strong that any Ghibli fan would have to have a heart of stone not to be delighted with what Miyazaki has presented us with here, regardless of the admittedly warped logic. 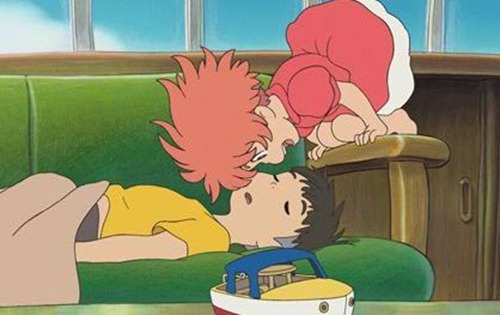 Still, the aforementioned breaks from reality are both to the film’s power and ultimate detriment. I loved the film just as much as anything else I have seen Miyazaki create… but unlike some reviewers, I disagree that this film topples the mighty Totoro from his throne. This is truly a children’s film, light on story and heavy on animated beauty. For this seasoned Ghibli viewer, it just about got away with this relative lightness for its 100 minute runtime… but it certainly isn’t the first film from the studio that I would choose to revisit. I also found some of the darker moments of the film teasingly delicious, but of course they could never go too far for fear of alienating the target audience, which is a shame. I loved the danger the ocean made me feel during the stormy moments. Totally exhilarating, proving Studio Ghibli once more to be the ultimate masters of traditional animation. Plus, the closing shot is both surprising and enchanting. 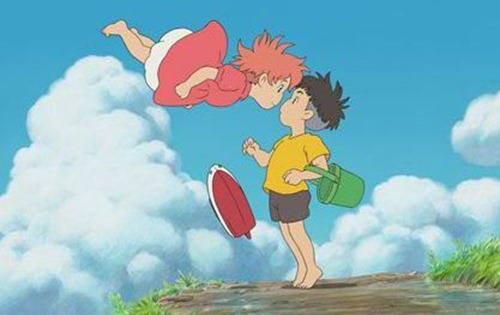 To finish this review, I must state the obvious: if you have small children or are a big Studio Ghibli fan, you can’t miss this. Solely based upon its animation, this is the most fantastic thing you will see until Miyazaki claims to retire again and then returns to treat us once more. This isn’t Spirited Away or Totoro, but it doesn’t try to be either. This is light, delightful escapism. For kids, this is going to be a classic for years to come, trust me. Of course, older viewer’s mileage will undoubtedly vary.

Oh, and the English dub does a half-decent job for once too! (I’ll still be holding out for the subtitled version on DVD before I decide completely though.) Although really, why the heck did they give us a club-music, teeny-style mix of the theme tune at the end, sang by our two lead voice actors? For shame Disney and mini Miley Cryrus and mini Jonas Brother in the making, for shame! You have to admit though, pretty catchy tune isn’t it? Ponyo, Ponyo, Ponyo, tiny little fish…

Interview – In Conversation With Colin Odell and Michelle Le Blanc (Authors of Studio Ghibli: The Films of Hayao Miyazaki and Isao Takahata)

Special thanks to Ka-Ka for seeing this with me after 5 years together!