FILM REVIEW – The Princess And The Frog

The Princess And The Frog is Disney’s 49th feature film and their first traditional 2D animation since 2004’s Home On The Range. Loosely based on the Brothers Grimm fairy tale ‘The Frog Prince’, Disney seems keen to shake things up from the usual formula they have stuck to in the past. Case in point: this is the first Disney film to feature an African-American princess. Taking my seat in the cinema, my main hope was that this bold simultaneous return/departure from Disney tradition would amount to more than a mere gimmick.

Thankfully, it soon becomes apparent that much more has been shaken up than just the ethnicity of the token Disney princess; the setting of French Quarter 1920’s New Orleans is certainly something fresh aesthetically, if not perhaps developed as much as I would have liked to see as the narrative progressed. Such a shame to begin in this exciting location before moving the main body of the film to a generic swamp, which is in turn basically a generic Disney forest, just with added water.

The story of a frog being kissed by a princess before being transformed into a handsome prince is pretty solid fairy tale fare, which is why The Princess And The Frog deserves credit for pointing out the blatantly obvious: such an act would be pretty disgusting! Here, Prince Naveen of Maldonia (Bruno Campos) is the unfortunate victim of a voodoo spell cast by the nefarious Doctor Faciliar (Keith David), aka The Shadow Man. But little does he know that a kiss from young waitress Tiana (Anika Noni Rose) will have far from the desired effect of reversing the spell… the botched outcome (causing Tiana to join him in his froggy predicament) is predictably hilarious, with the best humour stemming from the male and female leads bantering whilst in frog form. 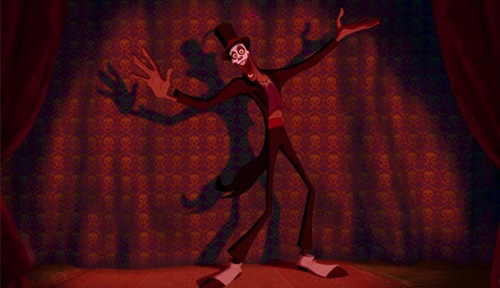 The animation is at its most vibrant and freeform during the scenes involving voodoo. The evil mojo of Doctor Faciliar, hovering voodoo masks chanting the chorus of an infectiously catchy tune whilst various spells of all colours whizz past blindingly bright, almost evokes the magic of Genie in Aladdin (but not quite). Later, Mamma Odie (voiced by Jenifer Lewis) has an even better song called Dig A Little Deeper (the best of the film in my opinion) with the brightness of her own brand of voodoo stealing the entire film. This is the animation at its most daring and unsurprisingly the rest of the film struggles to keep up. Quieter scenes set in the swamp at night practically claw for beauty, but I always felt the slightly computery gloss of the animation detracted from what should have been a return to form for Disney. Sadly, there is a scene near the beginning done in a style reminiscent of 1920’s postcards that is quite stunning, but it doesn’t last for very long. A true shame. Sometimes, less is more.

Elsewhere, Louis the trumpet playing alligator (Michael-Leon Wooley) is an obvious take off Louis Armstrong, but sadly not much is done with this wealth of potential musical parody. Instead, he becomes the stereotypical sidekick, a huge, intimidating creature that is a big wuss but has a heart of gold… just this time he has a trumpet.

Ray the Cajun Firefly (Jim Cummings) fares slightly better, although his voice could sometimes grate a little. Still, his story’s close is actually the least traditional of all the characters by the time the film ends and offers something surprisingly dark for a Disney film, which gets a big thumbs up from me. His poignant love of a distant star (which he believes to be another firefly) channels Pixar’s recent successes brilliantly and is one of the few moments of true heart on display here.

So far, so critical. Do I have an axe to grind? Not at all, I just feel we have moved past certain aspects of children’s animation that Disney seems determined to hold onto. Why another princess? Why even another fairy tale? Make no mistake, this has largely been played safe. Luckily, there is a huge draw here for kids and adults alike: the music. It is catchy, infectious and wholly original. Although I may not re-watch the film again, I will certainly be revisiting the soundtrack very soon. Randy Newman has a small voice part and I wasn’t surprised at all to find out that he composed and conducted the soundtrack: it has his unique style written all over it. It is probably the best aspect of the whole production.

Overall, The Princess And The Frog is a good film, but not a great one. For all its pretentions of moving forward, it still has one foot stuck firmly in the past. Whether via the Mardi Gras scenes that reminded me far too much of Don Bluth’s All Dogs Go To Heaven (perhaps a coincidence, but then again there is a huge alligator in that one too!) or the neatly wrapped up ending with the frogs becoming human again after all (even though it isn’t supposed to matter what you look like?) the standard children’s animation formula was too steadily adhered to. The girl gets her dreams coming true (actually through chance in the end rather than all the hard work she’s done) and she even marries her Prince Charming in the suddenly beautiful swamp at the end. The recently released Ponyo (reviewed here) may have been a little oddball for some, but it showed plenty of innovation. Sadly, for this reviewer at least, that is exactly what The Princess And The Frog lacked and it suffers as a result. The kids will love it but parents may wish the filmmakers had followed their own song lyrics and dug a little deeper…

Tagged as Animation, Disney, New Orleans, Randy Newman, The Frog Prince, The Princess And The Frog