INTERVIEW – In Conversation With Uni Dahl (The Silent Age, House on Fire)

Hi Uni, thank you for your time and welcome to Alternative Magazine Online!

Thanks. I really appreciate it.

House on Fire was founded in 2011 – can you share some insight into how the studio was formed?

A few months earlier I had quit my back-end development job, started a game studio on my own and was working on some prototypes, when my co-founders Linda and Thomas found themselves out of a job as the company they worked for closed down. Thomas had this great idea for a game about time travel, and so the three of us decided to start a studio together. 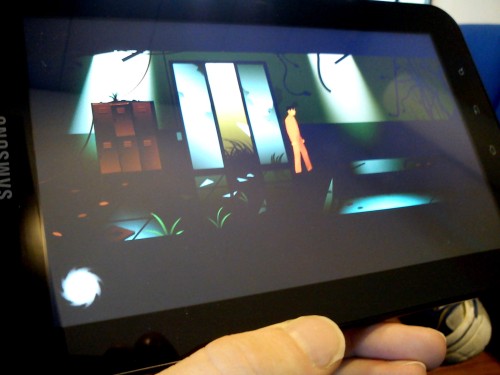 An early prototype of The Silent Age

Where did the original idea for The Silent Age come from?

The original idea was Thomas’. He is a big fan of urban exploration, where you explore old abandoned buildings and other man-made structures. He’d picture the building in its heyday and this is very much reflected in The Silent Age, where the player literally travels between the desolate abandoned future, and a present ‘heyday’.

I love the art direction of the game! How did the team arrive at this unique visual style?

This is totally Thomas’ style. As a designer he’s very good with Illustrator and he designed the whole game using it. 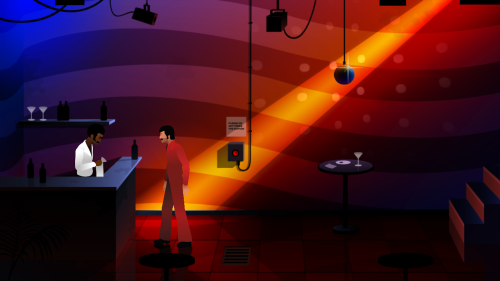 In my review, I described Joe as an ‘everyman’ – was making him an ‘average Joe’ (pardon the pun) intentional by design?

Absolutely. We wanted the significance of events to kind of flow over his head, without him really realising it. We also brought in the very talented Anders Petersen to help give Joe his personality and guide the story. I think he did an amazing job.

Well, we figured we’d be finished and have the game released in 2012, and so set the other time 40 years in the past. The reason the game takes place in the 70s is, well, the 70s. 🙂 It was a funky and very iconic time, and I think a period Thomas is very fond of in terms of style, music and culture in general. 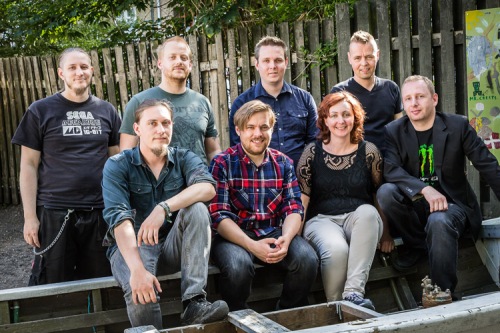 The House on Fire team

Were you already a fan of the point-and-click adventure genre?

Back in 2011 there weren’t many point-and-click options on mobile, and we felt it would fit well with touch screens. We’re all fans of adventure games to some degree. I myself hadn’t played any since Monkey Island and Beneath a Steel Sky. Of course, like so many others, I never managed to complete Monkey Island. It was just too difficult for me at that age, so we factored this difficulty OUT of the design of The Silent Age. We wanted to make sure players got a good flow through the game.

The Silent Age was originally split into two episodes on mobile devices. The first episode was free and the second was paid – how did you settle on this distribution model?

When we were ready to release everyone told us we couldn’t sell games on mobile anymore. So instead we decided to ask for donations, and see if we could collect enough donations to develop Episode Two. While we raised a substantial amount, it wasn’t enough, but the feedback we got on the game was so overwhelming that we got an investor to help develop Episode Two.

An early level sketch from The Silent Age

Did releasing the game in two halves pay off?

Offering the first half of the game for free did have its benefits and drawbacks. On the one hand you get a lot of downloads. You also get a lot happier players, because those that convert are doing so knowing exactly what they’re buying into. With an up-front cost people may feel conned into buying and then be disappointed. So I think offering the game in two episodes really left us with the happiest users and only those that truly liked the game enough to buy. Of course it didn’t help that we didn’t actually have episode two ready when the first one came out, but I think most players now are aware that The Silent Age: Episode 2 is out.

When did you decide to port a HD version to PC?

Bringing the game to PC was a funny story. We met our publisher Meridian4 at GamesCom in Germany. They were sent the game, and they actually got hooked and spent all night prior to our meeting playing the game. I think they got about 2 hours of sleep before another hectic day at Gamescom. I don’t know if you’ve been to Gamescom, but it’s usually back-to-back meetings. But they loved the game and we agreed to work on bringing it to PC. At the same time we wanted to have some exclusivity for the PC version, so we redid all the graphics in UHD and got some very talented voice actors to voice all the dialog. I’m really happy with the results.

The HD version also adds voice acting, with some impressive talent involved! How did you approach giving voices to previously silent characters?

We knew that adding voices to The Silent Age would change the experience a lot. We talked about it, and we were all on-board with trying it out. Since Anders had done all the writing, he also took the roll of casting and was sat in on the recording sessions directing the actors. Anders seemed to know exactly what he wanted down to the slightest pitch variations, and the actors did an amazing job delivering. I think their efforts really show through.

What’s your favourite part of the game and why?

Well, i hope this doesn’t spoil too much. If you haven’t played through yet, stop reading! 🙂 But the cryo chamber scene is one of my favourites. I especially remember working on the animations getting the timing and feeling of the scene just right, as it is the one that sticks out the most, I think. 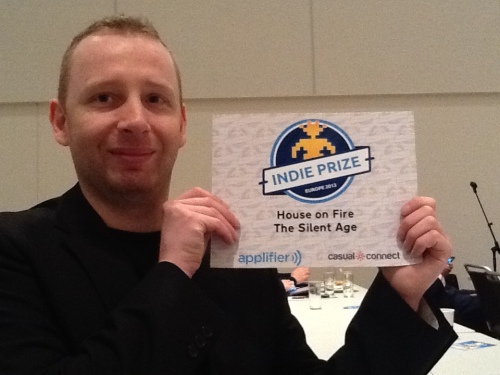 What has the fan reaction to The Silent Age been like?

From the first release the response was unbelievable. The game had a score of about 4.8 or so on the App Store. People loved it, and we got a lot of press coverage because the game was completely free, no ads, asking for donations. This was unseen before, and people wanted to see more.

Then as Episode Two came around, we got quite a backlash from players because we had the audacity to charge for the next episode. The ratings plummeted from 4.8 down to about 4.3, and I still get hate mail to this day about how expensive it is compared to what you get. We even got threatened with a lawsuit. People are so used to free games now that some actually get very upset when they have to pay for a game. But it is definitely just a very vocal minority.

We also have many fans who love The Silent Age so much they paid twice for it without hesitation, and we get daily mails from people sharing their love for the game. It’s truly humbling and we really appreciated it when people take the time to write to us.

Would you ever consider making a sequel?

Many people ask this question. We currently have no plans to create a sequel, and we closed off the story nicely. Everyone on the team is also more interested in making something new, so that sequel looks more unlikely every day. 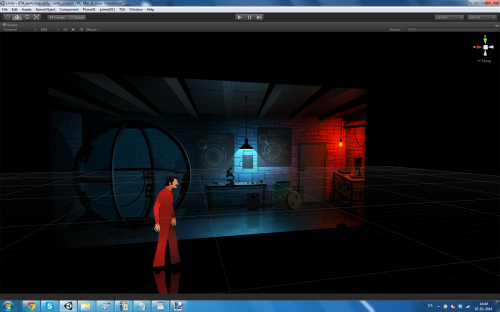 What’s next for you Uni? Can you tell me anything about House on Fire’s next project?

We’re working on some ideas, but it’s too early to announce anything. The best I can do is recommend people sign up to our newsletter at http://eepurl.com/HKjMX or follow us on Twitter @houseonfiredk or Facebook www.facebook.com/SilentAgeGame to get any announcements. We probably don’t write more than one or two emails every year.

Thank you for your time. As a huge fan of the adventure genre, I really enjoyed playing and reviewing The Silent Age and I can’t wait to see what House on Fire does next!

Thank you so much. I’m really glad you enjoyed it.