Looper is a science fiction film written and directed by Rian Johnson (Brick). It stars Joseph Gordon-Levitt as Joe Simmons, a ‘looper’ living in Kansas in the year 2044. Loopers are assassins who kill targets sent back in time by criminal organisations from the future, where time travel was invented and then immediately outlawed. Bruce Willis co-stars as Joe’s older self in a mind-bending time travel plot that thoroughly exceeds expectations.

Joe Simmons is a hired killer of the near future (2044). Each contract killing is simple – Joe drives to a deserted location, checks his pocket watch and when his ‘target’ appears seemingly out of thin air with a sack over their head, he immediately blasts them dead with his ‘blunderbuss’ firearm. In the future (2074), people can’t be killed without the murder being traced. Criminal organisations bypass this problem by illegally sending those they wish dead back in time, to be killed and disposed of in the past by ‘loopers’. Joe is good at his job and never misses his target – that is, until he comes face to face with himself.

But let’s not get ahead of ourselves. Joe may be good at his job, but he lives in a future that, although not bleak in a Metropolis or Blade Runner manner of speaking, is still facing economic collapse, social decay and mutation – 10 percent of the population possess mild telekinetic powers. Don’t get too excited. As Joe dourly points out, instead of superheroes emerging, the result is a plethora of guys in bars trying to impress women by levitating quarters. Joe deals with the numbness of 2044 through drug-induced decadence. He’s a high-functioning junkie who murders people for a living and hopes to one day cash in his money – silver bars strapped to his targets when they are sent back in time – and move to France.

‘Looper’ is more than just a badass sounding nickname for futuristic assassins – it has a meaning. Loopers kill without question – and one day they will do so and discover, when the sack is pulled from their target’s head, that it is their own dead body staring up at them. The mob of the future don’t want any loose ends – so when a retired looper reaches a certain age, they send them back to be killed by their younger self. After this happens, the looper retires, cashes in their last paycheck – this time in the form of gold bars – and enjoys the next 30 years before the inevitable happens. Their loop has been closed.

The boss of the loopers is Abe (Jeff Daniels), a man sent from the future to oversee the entire operation. When Joe fails to kill his future self and close his loop, he finds himself being hunted down by Abe and his fellow loopers. It sounds complicated – and it is – but director Rian Johnson firmly establishes the rules and sticks to them. Looper is a complicated film that is easy to follow – and the premise is so much more than just a face-off between Joseph Gordon-Levitt and Bruce Willis as young and old Joe. Of course, it does the film no harm that both actors are performing at the top of their game. 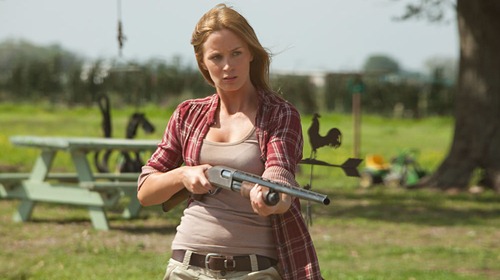 Emily Blunt puts in another strong performance as Sara, a young woman living in a remote farmhouse with her son Cid (Pierce Gagnon). These two characters are at the very heart of the film – but this reviewer will reveal no more for fear of spoilers, other than to comment that Gagnon steals the entire film as the most charming/terrifying child to hit the big screen in a numbers of years.

Looper could have very easily been a generic action film with science fiction merely serving as a backdrop. Instead, it’s a science fiction film with an unusual amount of depth – and heart. Old Joe (Willis) is fighting for more than just his life, and young Joe (Gordon-Levitt) eventually discovers a cause worth fighting for that shakes him out of his drug-fuelled continual ‘fuck you’ to the world. 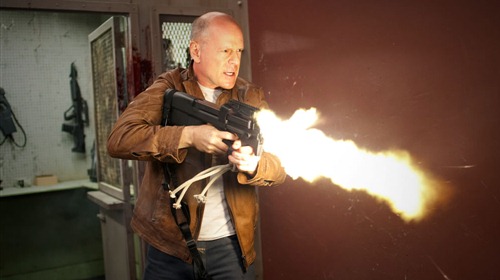 Looper is the best science fiction film since Duncan Jones’ Moon. The trailer doesn’t do it justice – there is crowd-pleasing action throughout, but the real draw here is the incredibly smart script written by director Rian Johnson. There are some minor quibbles – the soundtrack is forgettable, some of the costumes look slightly hokey at times and there are plot holes if you look close enough –  but the overall experience is extraordinary.

The futuristic world of Looper is conveyed convincingly throughout, whilst remaining recognisable enough to feel truly uncomfortable. The plot takes many unexpected twists and turns – it even veers towards horror at times – and the ending is perfection. Looper has brains, brawn and heart – it will undoubtedly cause much discussion and debate. Quite simply, it’s one of the best films of 2012 and one of the most satisfying science fiction films of the past decade.