Journey (PSN) in an incredible, unforgettable experience. When I was trudging up the snowy mountainside, ice-cold wind blasting in my face, I really felt it. When I collapsed face down in the snow, my heart sank. When I was resurrected and soared higher than ever before, I felt elated. Euphoric doesn’t do the ending justice… blinding white light has become seared into my retinas. Journey is an experience saturated with emotion. One of the best games released this year and a true work of art – AMO is therefore proud to present an exclusive online interview with Sunni Pavlovic, Studio Manager at thatgamecompany!

Hi Sunni, thank you for your time and welcome to Alternative Magazine Online!

It’s my pleasure, Martin. I’ll do my best to provide insightful answers!

I started working at thatgamecompany as Studio Manager about five months ago, shortly after Journey was released. I grew up in the Los Angeles area, where thatgamecompany is based, and – after spending several years on the other side of the world living and working in China – it’s hard to imagine a better place for me right now.

You mentioned that you’re the Studio Manager at thatgamecompany – what does your job entail?

It’s my job to make it easier for us as a studio to deliver a meaningful experience for our players. I look after a lot of the details and planning that comes with developing and shipping a game, especially now that we’re self-publishing, so that my teammates can focus on creating the technology and design of our game.

Is it true that you lived in Shanghai after graduating from the University of Southern California?

I moved to Shanghai right after finishing up my studies in Communication and Cinematic Arts. I figured if I wanted to tell meaningful stories people could relate to, I had to live through some interesting stories first. Living in a foreign country will do that. I learned a lot about myself and other people – what is similar, what is different.

How did you become involved with video game development?

I would spend time with friends playing video games. These sessions created a lot of shared memories I could look back to long after we had stopped playing. Because I had this positive association of what games can be and do, I spent more time playing on my own. It occurred to me that spending several hours in direct interaction with a game can be a very profound and intimate experience, potentially more so than with a book or movie. This helped me realise I want to create these same kinds of positive experiences for others.

What is it like working at thatgamecompany and what makes it different from other game studios?

Our philosophy – to create timeless interactive entertainment with universal appeal and accessibility – is a huge part of what makes us thatgamecompany. It drives our every decision. We approach the process of making games a certain way because we want to deliver a different kind of experience – an emotionally compelling experience.

We’re a relatively small studio, and everyone is personally motivated to create something worth asking players to give their time to. We spend a lot of time exploring the best ways to do that. Getting that right requires a lot of mutual respect, for each other and the work we do.

Being small has its advantages. We can create a different and, for us, better process. A larger team size would simply weigh down our creative process. Our size also drives us to be very focused and selective on what we pursue.

How did the three-game PlayStation 3 deal with Sony come about?

Sony saw the flOw Flash game from Jenova Chen’s master thesis. Based off of that, Sony offered Jenova and fellow thatgamecompany co-founder Kellee Santiago a three-game incubation deal. This gave the two of them the basis for starting thatgamecompany. In exchange, thatgamecompany’s first three games – flOw, Flower, and Journey – are exclusive to Sony’s platforms.

Film critic Roger Ebert doesn’t believe that games can be art – what do you think?

I’m looking forward to a time when games are popularly accepted for their potential as art as much as any other entertainment medium.

flOw and Flower both have very simple premises – what do you think holds the player’s attention when playing such games?

flOw and Flower are designed with rewarding moment-to-moment feedback for the player. In other words, those games don’t make you work for them – they were designed to provide a cohesive and meaningful experience all the way through.

thatgamecompany’s most recent game is Journey – how would you describe this title to new players?

Journey plays as an interactive parable about the passage of life and the bonds we form with each other.

Is Journey a more traditional/story orientated video game than flOw and Flower?

Journey, flOw, and Flower all lean more towards the experimental side of gaming. A more traditional approach would allow us to make games faster, but then those games might not be as interesting or memorable. It’s more important for us to ask what a game made someone feel. If the game is able to delight, surprise, and move a broad range of players, then we feel we’ve done something right.

Journey’s graphics are beautiful – they are even more astonishing when you consider that this is a downloadable title and not a full retail release. What is the technology powering the game?

We wanted to achieve a specific look and feel in Journey – something familiar but also mysterious. To make the visual experience stand out, we chose to focus a lot of our resources on the quality and range of Journey’s colours and lighting. Regarding specific technologies, the game was built with Sony’s PhyreEngine and a lot of our own custom code on top. 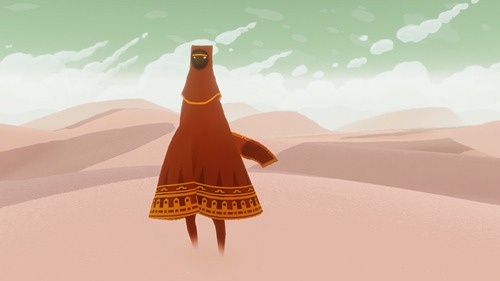 Do you think that graphics are important in video games?

Good graphics are nice, but if it’s the only nice thing about a game – well, I care about the overall game experience. I’ve certainly found some games without high-end graphics to be very entertaining or involving because the game developers did a really good job coming up with a design that felt right for their game.

The music in Journey adds immensely to the atmosphere – who was the composer and how did you go about collaborating with them?

The composer is the talented Austin Wintory. Austin and Jenova met at USC where they worked on the original flOw flash game. With Austin, there is a lot of iteration back and forth as the game design and music would inspire each other in new ways. Because of this, bringing Austin in at the beginning of development provided an enormous creative payoff for the project as a whole. 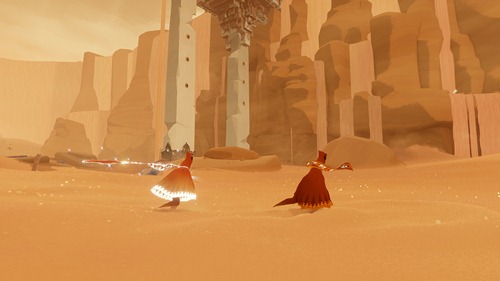 The multiplayer is unusual – and impressive – for a number of reasons. Why did you choose to implement it in the way that you did?

There are already so many other online multiplayer games that reward supremacy and domination over one’s fellow players. Journey is designed to be the exact opposite. Journey encourages feelings of love, where cooperation between two players feels joyful and rewarding. The wordless and anonymous exchanges between players focuses their expressions on universally understood messages of appreciation and care.

We recently spoke via email and I conveyed to you how, for me personally, Journey was an experience saturated with emotion. It is one of the best games I’ve played this year and a true work of art. What has the critical reception for Journey been like from gamers and the gaming press?

I think I can safely say the entire Journey development team feels very fortunate for the outpouring of appreciation we’ve received from players. More than six months after launch and we’re still receiving emails from players who share with us the personal impact Journey has had on them.

One of the more memorable letters described how a man was able to talk openly with his brother on an emotional level, about the game and about life, for the first time because they had both played Journey. To hear that games have the ability to affect positive change outside of the game experience is incredibly inspiring for us.

What do you think makes Journey so emotional and involving?

I believe the core experience of Journey doesn’t even happen within the game. After hearing from so many different people who’ve experienced Journey, I really appreciate how each person describes his or her experience differently. The most meaningful and memorable aspects occur within each individual’s subjective, emotional experience of playing. As developers, we’ve just paved the way.

Your three-game deal with Sony is now complete. Will thatgamecompany continue to work on PlayStation 3 or might we see multi-format releases in the future?

We’re still early into the development cycle for our next game and aren’t announcing any platform(s) for this game yet.

What’s next for thatgamecompany in general?

Our goals and direction remain the same: design and develop artistically crafted, broadly accessible video games that push the boundaries of interactive entertainment

Thank you for your time Sunni! In my opinion, Journey is a true work of art. Congratulations on being involved with one of the best video games of 2012 – I shall look forward to seeing what thatgamecompany does next!

Thank you so much, Martin. You asked some great questions, and I’m happy to have had the opportunity to share with you and your readers.