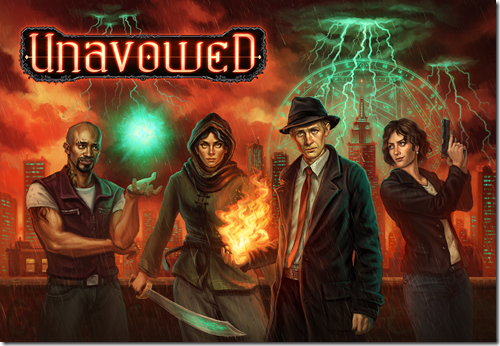 Unavowed is the new game from Dave Gilbert – creator of the critically acclaimed Blackwell adventure game series – and Wadjet Eye Games (Shardlight, Technobabylon). Described as an ‘urban fantasy adventure’, players take control of the latest member of an underground group of supernatural guardians known as the Unavowed, investigating the unknown and fighting evil in a perpetually rainy New York City.

The Blackwell Epiphany – which AMO’s review described as “saddening, hopeful, unexpected… almost perfect” – was always going to be a tough act to follow. Wadjet Eye Games has published some wonderful games over the intervening years, but Unavowed is the first game since Epiphany to be developed by company CCO and founder Dave Gilbert.

Unavowed breaks away from the pre-established and familiar Blackwell mould, despite being set in the same universe. The game begins by asking the player to choose their gender (male or female), profession  (actor, bartender or cop) and name (whatever you want), and all three choices actually have an impressive degree of impact on the narrative as the game progresses. 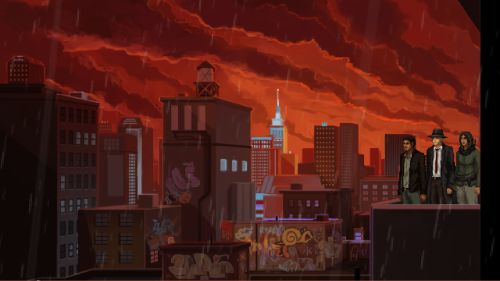 This reviewer’s chosen character was a male bartender named Martin. The game opens with the player character being exorcised by a fire mage (Eli, a former accountant) and a jinn (Mandana, a half-human, half-genie woman whose mother was a pirate). With the demon removed – and after leaning they have spent the past year wreaking all manner of evil havoc throughout New York – the player character agrees to join the Unavowed.

The premise admittedly doesn’t sound very original on paper. There have been countless films, books and video games that deal with a dangerous supernatural world hidden from the general population, starring a secret organisation of heroic guardians that devout their lives to keeping said population safe and blissfully unaware. A lot of these stories are also set in New York; it has become the quintessential American city. 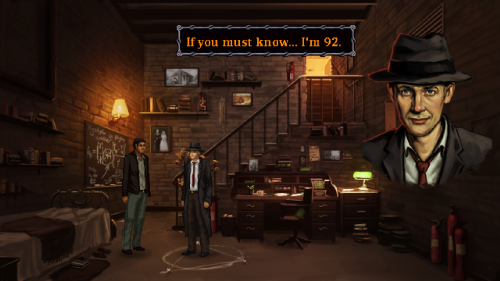 Yet somehow, Unavowed still manages to feel relatively fresh. It helps that the Unavowed themselves are really cool. Eli is incredibly endearing – especially when he’s gushing about his estranged family or old profession as an accountant – and Mandana is a total badass who only feels physical pain when she hears a lie. Later, the player can recruit new Unavowed members and choose who to take with them on their next mission. Each character is incredibly well written and voiced, which is even more important than usual as the main character doesn’t speak at all. Instead, you choose a question or statement and then everyone else does the talking while you listen.

It’s a system that has its pros and cons. By allowing the player to shape the main character and the story itself at key decision-making moments, there is a definite RPG flavour to the proceedings. For example, being a bartender means the player can often get people to open up to them during conversation and each member of the Unavowed has their own unique ability too (so choose wisely). However, those who love their traditional adventure games with no added sugar should still be able to enjoy themselves (and indeed, this reviewer did immensely). It admittedly loses some of the charm of the Blackwell games by having a silent protagonist, but the decision does pay off from a storytelling perspective later on and it gives the supporting characters a chance to really shine (which they do).

Various ‘missions’ form the meat and potatoes of the game, following the path of destruction that the player character left in their wake during their forgotten year of demonic possession. It’s a really clever way of shoehorning in a whole bunch of smaller stories alongside the main narrative. The game takes place over several rainy nights and there’s a tangible sense of time and place as you investigate the latest mystery to present itself. You can tell this experience was crafted by a genuine New Yorker.

Whether you’re dealing with the ghost of a little girl in an empty house in the Bronx, a violent plant creature in the North Grove of Central Park, or a kidnapped baby on Wall Street, the game remains relentlessly gripping; there is some seriously excellent storytelling going on in Unavowed. The inventory and discussion-based puzzles make sense and are reasonably challenging, and the other members of the Unavowed will always be happy to point you in the right direction if you get stuck.

As previously mentioned the voice acting is strong throughout and the graphics are impressive too. In keeping with Wadjet Eye’s previous games the visuals are unmistakeably old-school and pixel-based, but at the same time this is the prettiest – and highest resolution – game the studio has ever released. It scales well too; it looked truly beautiful when played on a Sony 4K television via Steam Link.

Unavowed is undoubtedly a special release within the point-and-click adventure genre. The set-up and main story are ever so slightly generic, but it is the smaller, more intimate stories told throughout that will stick with players long after they’ve exited to their desktops. Adventure gamers – and fans of the Blackwell series – shouldn’t hesitate; Unavowed re-establishes Dave Gilbert as one of the genre’s most talented developers.