Shardlight is the latest game from Wadjet Eye Games, publisher of The Blackwell Epiphany, Resonance and Gemini Rue (to name but a few). Another old-school pixel-art point-and-click adventure game (try saying that five times in a row!), Shardlight is set 20 years after a cataclysmic disaster has levelled the city Amy Wellard lives in. She’s now slowly dying of Green Lung, a disease that is wiping out the population at an alarming rate. Vaccine is in short supply, rationed by a totalitarian government that favours the rich… but that won’t stop Amy fighting for her life.

Shardlight begins with Amy Wellard entering a dangerous nuclear reactor to restore power. It’s a lottery job – successful completion will grant her with a lottery ticket. If her ticket is drawn, she’ll be given a rare vaccine… but it will only delay the inevitable. The gorgeousness of the pixel-art and intuitive opening puzzles offer a gentle opening, but things soon change rather drastically when Amy finds the previous lottery worker crushed beneath some rubble deep inside the reactor. His dying request? Shoot him in the head with a crossbow, then deliver a letter.

It’s a sudden punctuation point of violence that becomes a recurring theme in Shardlight. Can change be made in this new world without blood being spilt? The voice acting is superb and easily fills in any emotional gaps left by the old-school aesthetic. Shelly Shenoy in particular is superb as Amy, remaining endearing throughout even when she has to do the unspeakable. It’s amazing what strong voice work and simply drawn character portraits can convey – it wasn’t until near the very end of the game that this reviewer realised the characters mouths didn’t move when they spoke! In the end, it didn’t even matter.

Once Amy has fixed the reactor the game beings proper and she rises into a world both devastated and beautiful, bathed in the eerie green glow of uranium glass shards, used by survivors as a source of light. Shardlight. The city is ruled over by a government known as the Aristocracy. The fact that their name term derives from the Greek aristokratia, meaning ‘rule of the best’, should give you some idea about how they run things.

The rich few prosper in their ivory tower (well, the main baddie is in a tower, the rest of them just seem to have quite nice mansions…) while the poor masses struggle and die in squalor and disease. They take their name rather seriously too, wearing Elizabethan era powdered wigs and expensive clothes complete with ruffs, marching with rifles equipped with bayonets. They’re creepy to say the least. 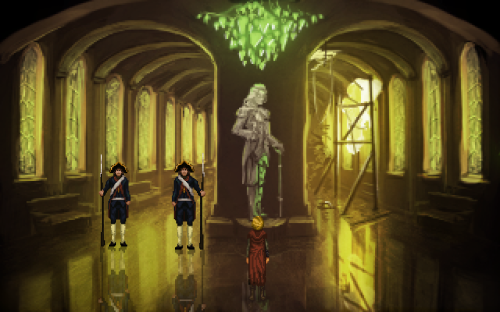 However, their leader Tiberius (voiced charismatically and memorably as always by Wadjet Eye favourite Abe Goldfarb) is the creepiest of them all by a country mile, his face always covered by a bizarre ivory gas mask. When the letter given to Amy leads her to an underground rebel base, she is asked to infiltrate the Aristocracy from the inside. Tiberius, seemingly always one step ahead of the uprising, later asks Amy to do the same to the rebels. The early dialogue choices don’t change the course of the game, but it’s refreshing how players can decide for themselves what their motive is. Are you a double agent? A triple agent? It’s all a delightful shade of grey.

The puzzles are really well thought out and progress as a brisk clip without feeling too easy. Early on in the game, there are several locations to choose from and they’re all a delight to explore, especially as many of the other characters have pre-existing relationships with Amy. It’s world-building at it’s finest. The only occasional problem is that the initial openness can sometimes mean a dialogue option that wasn’t previously available now has to be triggered with a specific character. It can result in a ‘visit everywhere, click everything’ approach that is never desirable. The payoff is that in the second half of the game progress becomes a lot more linear, with the story racing towards its inevitable conclusion and in the process sidestepping the problem of wondering what to do next – although this does throw the pacing off slightly.

There are some other small issues, including a murder at the mid-way point that comes out of nowhere and doesn’t seem to upset Amy anywhere near as much as it should. Yet the central mystery keeps pulling her forward and it will pull the player along with her too. There is a lot more to the story than has been revealed in the publicity material (or indeed, this review) and it’s greatly enjoyable watching everything unfold in often surprising and unexpected ways.

Offering around 8 hours of quality point-and-click adventuring, Shardlight is a beautiful game that presents a fresh take on the tried-and-tested post-apocalypse formula. It’s a little bit too serious at times – some additional levity without going overboard would have done the experience wonders – but its greatest triumph is that it truly makes you think. It isn’t a simple case of the Aristocracy being evil and the rebels being good. As previously mentioned, it’s all a delightful shade of grey… until you’re forced to decide. Until then, keep your crossbow loaded, tell everyone that you have the perfect life (all will be revealed) and enjoy another lovely little adventure from Wadjet Eye Games!