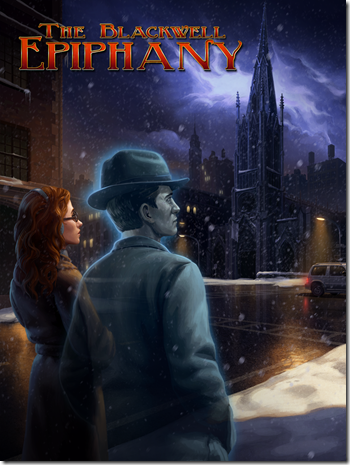 The Blackwell Epiphany is the fifth and final instalment in the Blackwell series of indie point-and-click adventure games from Dave Gilbert and Wadjet Eye Games. Rosangela Blackwell and her spirit guide Joey Mallone (described in AMO’s 2011 review of The Blackwell Deception as “an adventure gaming duo made in heaven”) embark on their final investigation and end up facing their most dangerous foe yet – an unseen force that literally tears souls apart before they can be saved.

Pixellated snow, it turns out, can be absolutely beautiful. It drifts down onto Rosangela (and through her ghost companion Joey) as they stand on a dark New York street corner outside a condemned building. It’s a cold start, but by this point no introduction is required. Although each of the Blackwell games works more or less as a standalone experience, The Blackwell Epiphany is truly the end – no time is wasted here making introductions. Rosangela can’t get inside (the door is locked), so Joey floats through the wall. It’s what they do.

What follows is an immediately comfortable refresher of the puzzle elements that have defined the series over the years. Rosangela speaks with a ghost called Mary and does some detective work via her mobile phone to find out more about her, consulting her rapidly expanding notes every step of the way. Joey lends a helping hand (even though he can’t actually pick anything up) and strategically blows items with his spectral breath. Together, they help Mary realise she’s dead so she can be set free. All it takes is some faith, a little trust… and a special tie. 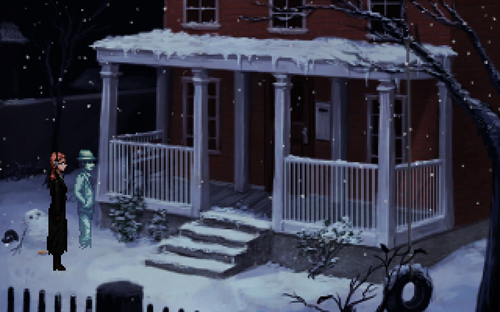 Up to this point it’s business as usual, but then the game changes dramatically. A man is shot in cold blood and before our dynamic duo can question his spirit, it’s violently torn apart by an unseen force. This worrying development catapults Rosa and Joey into the midst of a murder investigation where the stakes continue to rise and the plot only gets thicker. They get some reluctant help and gentle nudges in the right direction from their old friend Detective Durkin but apart from that, they’re on their own.

Like many adventure games, The Blackwell Epiphany mixes traditional point-and-click puzzles and exploration with chit-chat that involves a wide variety of characters. Yet unlike many adventure games, the environments and characters ring startlingly true. This may be an adventure created on a small budget, but the production values and writing are of the highest quality. There is a constant sense of time and place that anchors the player in the moment whilst always acknowledging the universe’s rich past. Flashbacks reveal more of Joey’s history without ruining his mystique and every character has a backstory that proves fascinating and often heart-breaking. It’s deep stuff and you’ll want to go deeper.

Rebecca Whittaker as Rosa and Abe Goldfarb as Joey continue to showcase the great chemistry they’ve always had, but they somehow manage to step it up a gear for their last hurrah – their emotional performances are superb. The storyline is often convoluted and takes a good long while to pay off, but Rosa and Joey always manage to keep engagement and enjoyment levels high with their sharp yet fond banter. Elsewhere the villain can be a little bit pantomimey at times, but becomes terrifying when and where it counts.

The Blackwell Epiphany not only shows the growth of the Blackwell games as one of the finest point-and-click adventure series ever made, but the growth of Dave Gilbert as a game creator and Wadjet Eye Games as an indie video game developer and publisher. With AAA game publishers continuing to throw money at projects that sell by the truckload but are ultimately missing that special something, the final Blackwell adventure is a bittersweet farewell that sees the series bow out on a high. The ending may ultimately prove to be digital Marmite, but let’s be honest – it couldn’t have ended any other way. Saddening, hopeful, unexpected… almost perfect. Goodbye Rosa and Joey. You’ll truly be missed, but never forgotten.