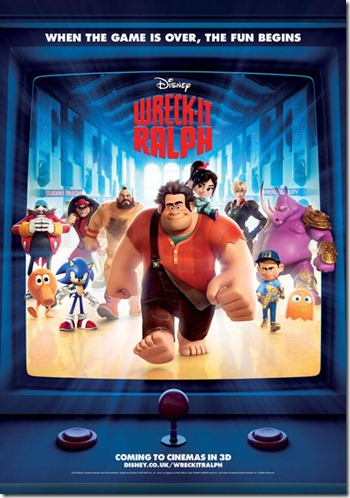 Wreck-It Ralph is a computer-animated film directed by Rich Moore, produced by Walt Disney Animation Studios and distributed by Walt Disney Pictures. It tells the story of Ralph, an arcade game villain tired of always playing the bad guy, who escapes from his game in the quest to become a hero. Yet little does he know that by entering other games, he will set in motion a chain of events that could threaten the entire arcade…

Ralph (wonderfully voiced by John C. Reilly) is the titular villain of Wreck-It Ralph, although being a ‘bad guy’ doesn’t necessarily make him a bad guy. He’s sick of spending each and every day in the arcade game Fix-It Felix, Jr. wrecking the same building over and over again, while Felix (30 Rock’s Jack McBrayer) fixes everything and gets all the glory, both in-game and after hours. While Felix and the choppily-animated building residents celebrate the 30th anniversary of the game, Ralph is left to lie alone in the nearby junk pile with only loose bricks – which also serve as a makeshift blanket – for company.

Ralph later shares his frustrations at ‘Bad-Anon’, a support group for disillusioned video game villains (other attendees include Clyde the orange ghost from Pac-Man, Doctor Eggman from Sonic the Hedgehog and Bowser from Super Mario Bros.), before heading to Tapper’s bar for a root beer. It’s here – after discovering a Metal Gear Solid exclamation mark in the ‘lost and found’ box – that he forms a plan to win a gold medal and return to his game cabinet a hero. He decides to infiltrate the first-person shooter Hero’s Duty, with dire consequences…

In Wreck-It Ralph, a multi-plug is shown as Game Central Station (with Sonic the Hedgehog making safety announcements!), and game characters can catch trains to different arcade cabinets when the arcade is closed at night. Ralph’s journey from one video game to the next is represented visually as a spark of electricity passing down an arcade cabinet wire connected to the multi-plug – it’s a very inventive and original idea that sells the entire world in a plausible manner.

The main story initially seems to be about Ralph becoming a ‘hero’ – and indeed he does get his gold medal fairly early on, albeit by cheating – but before long he has unleashed an alien creature from Hero’s Duty (a Cy-Bug) into the kart-racing game Sugar Rush, and the focus changes to his relationship with a young girl named Vanellope von Schweetz. A ‘glitch’ within her own game, Vanellope (voiced by acquired-taste comedian Sarah Silverman with just the right amount of cutesy annoyingness) steals Ralph’s medal and uses it to enter herself into the next race. Ralph must help her win the race to retrieve his medal and return home before his cabinet is retired as faulty – after all, what’s a game without its villain?

King Candy (Alan Tudyk) is up to no good, the Cy-Bug is laying eggs beneath Candy World and Felix must team up with Hero’s Duty’s tough-as-nails lead character Sergeant Tamora Jean Calhoun (Glee’s Jane Lynch) to track down Ralph. For a 108 minute film there’s certainly a lot going on here – the video game and pop-culture references come thick and fast and it’s always a joy to acknowledge the numerous in-jokes, knowing winks and nods of recognition (extra points to anyone who pick up on the Predator reference).

Wreck-It Ralph is as effortlessly enjoyable as it sounds but that isn’t to say it’s without fault. The film occasionally falters during its action sequences, as do many computer-animated films – after all, watching a computer game race is never as much fun as playing one. The story isn’t particularly emotional or deep either (especially when compared to the likes of Toy Story 3), but not every computer-animated film’s story should be and the comedy, along with the endless video game references, more than makes up for this.

The premise is superb and the inevitable sequel will certainly have plenty to work with and build upon. Disney’s animated short film Paperman precedes the main feature and it’s arguably a minor masterpiece. Wreck-It Ralph never quite reaches these lofty heights, but it’s a great film nonetheless that entertains from beginning to end. Experience it expecting no more – and no less – and you’ll have a great time, whether you’re a young child taken in by the endless visual delights, or an older gamer who simply enjoys seeing their prized interactive medium of choice treated with the respect it deserves. As Q*bert would say, @!#?@!