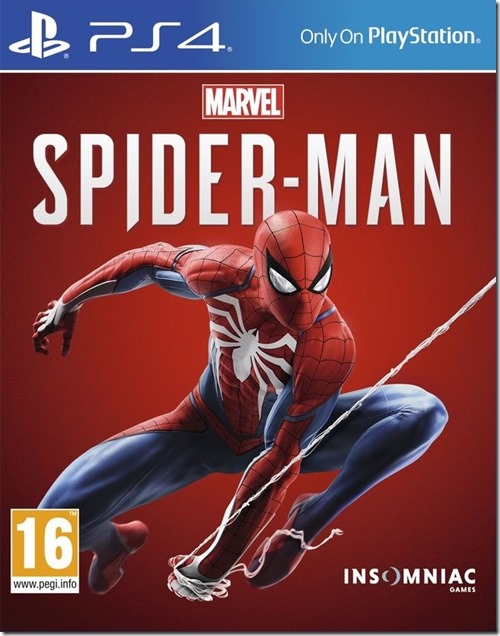 Marvel’s Spider-Man is an open world action-adventure game developed by Insomniac Games (Ratchet & Clank) and published by Sony Interactive Entertainment. Built around the Marvel Comics superhero Spider-Man, this PlayStation 4 exclusive sees players taking control of the famous web-slinger after he has already been fighting crime for eight years. Offering a fresh take on the character and his universe that doesn’t follow the continuity of any prior comic book, film or video game, Marvel’s Spider-Man sees Spidey – and Peter Parker – facing the mysterious and deadly Mister Negative in the bustling real-world metropolis of New York City.

Marvel’s Spider-Man begins with a short cutscene that ends with Peter Parker donning his Spider-Man costume and jumping out of his apartment window. It’s an exhilarating sequence that culminates with a seamless transition into gameplay; players are immediately instructed to hold R2 to swing and it really is that simple. Every single move in Spider-Man is easy to learn yet difficult to master. R2 is used for web-swinging when in the air, for running when on the side of a building, and for parkour when on the ground.

It’s a wise decision to showcase the web-swinging mechanics early on. A Spider-Man game lives or dies based on its web-swinging and this new game doesn’t disappoint. Each line of webbing actually attaches to the nearest surface – your heart will skip a beat when you first cross Central Park and have to latch on to trees and lamp posts – and building and maintaining momentum is essential when moving at speed. It’s as much about when not to press the R2 button; after falling for a short amount of time Spidey will begin to dive, which is the perfect time to launch another string of webbing. You can also zip to almost any ledge, corner or perch – then jump off them to boost if you wish – by pressing L2 and R2 at the same time. 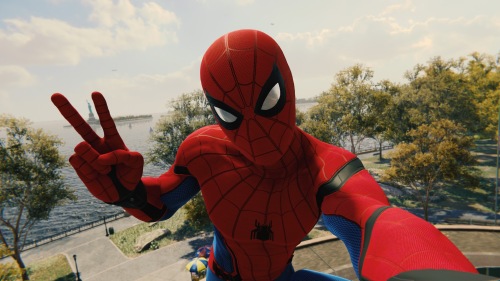 In short, Insomniac Games has absolutely nailed the web-swinging. It just feels right and pretty soon swinging around corners and running up the sides of skyscrapers will become second nature. The fighting mechanics are equally accomplished; it’s easy to pick up the basics of combat but there’s also plenty of depth for players that want to push their favourite web-head just that little bit further. Pressing the Square button will punch and kick the nearest enemy, while holding it down will launch them into the air.

Pressing the Triangle button will zip Spidey to the nearest enemy (great for keeping your combo count high), while the X button can be used to jump into the air. Once an enemy is in the air with Spidey (usually by holding Square to uppercut them there), keeping them airborne is simply a case of continuing to punch and kick; alternatively, holding the Square button while airborne will allow Spidey to swing on a line of webbing and kick the enemy with both feet, which is awesome when brawling on a high rooftop.

While in combat, players can also select one of Spidey’s various web shooter gadgets by holding down the L1 button – for example, a web bomb – and shoot them with the R1 button. There are even stylish slow motion finisher moves that can be pulled off when available (there is a focus bar beneath the health bar that fills up as you fight) by pressing Triangle and Circle at the same time. The varied number of ways to approach combat – which will only increase as the player levels up and unlocks new abilities – keeps the fighting feeling fun and fresh throughout, even against the game’s generic street thugs.

Admittedly, the combat owes a lot to Rocksteady’s Batman Arkham games, but it never feels like a complete rip-off. In fact, dodging – achieved by pressing the Circle button whenever Spiderman’s Spider-Sense tingles above his head – feels like a much more natural fit here; instead of issuing a brutal counterattack like Batman, Spider-Man acrobatically leaps to safety, usually by jumping above an enemy’s head or sliding between their legs. Spider-Man is always moving and anticipating his opponent’s next move, which feels very true to the character.

The controls are context sensitive too; for example, if an enemy hasn’t spotted Spider-Man yet and isn’t on high alert, they can be taken out stealthily by pulling them into the air with webbing and cocooning them (again, by pressing the Square button). Another example: pressing the R3 button highlights nearby bad guys and lets the player know whether an enemy can safely be taken down without alerting his buddies, while when outside of a mission and exploring the city, R3 highlights nearby points of interest. Yet another example is the Square button, which is usually used to attack enemies; when walking the streets of New York outside of combat, it can be used to greet, salute and shoot finger guns at members of the public.

Backing up the truly exceptional gameplay is a storyline that surpasses any of the Spider-Man films or video games released to date; it’s that good. Familiar characters appear throughout but they’re often not what you’d expect. Mary Jane Watson is an investigative journalist for the Daily Bugle, Peter’s boss/lab partner is Otto Octavius and the major of the city is Norman Osborn! 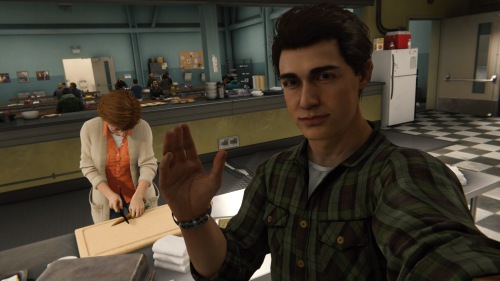 The storyline won’t be spoiled in this review, but the incredible voice acting – especially Yuri Lowenthal as the titular hero – and highly accomplished art design brings each character to life. Cutscenes are never a chore to watch – they’re like scenes from a big budget film – and the story missions have some incredible set pieces, especially during boss battles. Even the side-missions have been well thought out and while some optional tasks can become somewhat repetitive near the end, the  gameplay is so much fun it’s easy to imagine more gamers than usual striving to reach 100% completion.

The score composed by John Paesano – who also recently composed the soundtrack for Markus in Detroit: Become Human – deserves special mention; it is both epic and highly memorable, breaking the silence whenever Spider-Man starts to swing to make players feel like a real superhero. There is a lot of variety and so much to do, but it’s never overwhelming. The pacing is excellent and not all of the gameplay involves Spider-Man either; Peter Parker is just as likeable and his missions can be just as fun in their own way. Some missions even allow the player to control Mary Jane as she sneaks into places where she shouldn’t be, distracting guards, taking pictures and solving basic puzzles. 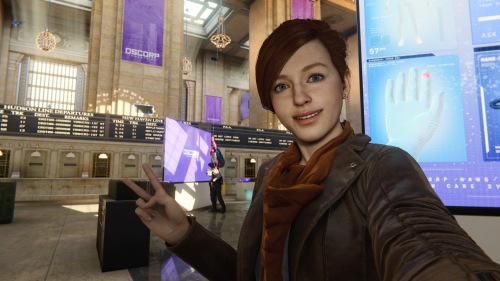 The photo mode is a blast too; all the images included in this review were taken in-game using this mode. The level of graphical detail is astonishing at times, especially when you realise you can read the writing on the side of a rocket and actually discern the material of Spider-Man’s various outfits (all of which come with their own unique abilities that can be swapped and changed between suits). There are no load times when exploring the city and only a short loading screen when entering the inside of a building during missions.

New York City is as much a character as Spider-Man himself. Golden beams of sunlight reflect off the glass windows of skyscrapers as Spider-Man climbs ever higher. Perching at the top of the dizzyingly tall Avengers Tower, the draw distance is breathtaking. Walking on the streets below, the level of detail holds up to closer scrutiny. This is the most impressive and convincing virtual city since Grand Theft Auto V’s Los Santos. The weather isn’t real-time, instead tied to the required mood of the current mission. This ensures that every moment in Spider-Man looks exceptional, come rain or shine.

The many delights of Marvel’s Spider-Man would struggle to be contained within an entire book, let alone this review. A handful of times a gaming generation, something special comes along that rewrites the rulebook and raises the bar. You don’t need to know what specific villains you’ll be facing and you shouldn’t spoil the surprise for yourself either – it’s best to approach this game as fresh as possible. There are some small ‘quirks’ and glitches that are part and parcel of open world games, but they’re more humorous than anything else and never become game-breaking.

There have been some truly awful superhero games released over the years and some truly excellent ones too. In this reviewer’s humble opinion, Spider-Man is the best superhero game to date and will be remembered as one of the PlayStation 4’s finest games alongside Uncharted 4, God of War and Horizon: Zero Dawn. If you have even a passing interest in Spider-Man – this game is just as accessible to newcomers as it is to dedicated fans – then you shouldn’t miss Marvel’s Spider-Man under any circumstances. In the immortal words of Tobey Maguire as Peter Parker: “Up, up and away web!”