GAME REVIEW – Tales From The Borderlands: Episode 5 – The Vault Of The Traveler (PC) 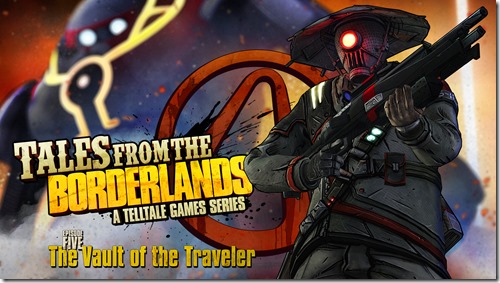 The Vault Of The Traveler is the fifth and final episode of Tales From The Borderlands, a five-part episodic video game series from Telltale Games (The Walking Dead, The Wolf Among Us). With Handsome Jack now in control of Helios’ systems following the shock ending of Episode 4 – Escape Plan Bravo, Hyperion middle-manager Rhys, Pandoran con-artist Fiona and their ragtag team must grab the final Gortys piece and fight their way off the deadly space station before it’s too late!

As mentioned in AMO’s reviews of the previous four episodes (Zer0 Sum, Atlas Mugged, Catch A Ride and Escape Plan Bravo), Tales from the Borderlands is Telltale Games’ most consistently crowd-pleasing episodic series to date – and The Vault Of The Traveler is no exception. From the truly heartbreaking opening credits (the haunting music is Retrograde by James Blake) to the uplifting end credits (My Silver Lining by First Aid Kit – seriously, Telltale Games is fast becoming the video game equivalent of Quentin Tarantino when it comes to making perfect song choices…), Episode 5 is an emotional roller coaster ride that never stops to catch its breath between all of the laughter and tears. It’s a beautifully crafted, fitting finale.

Comedy isn’t easy (especially in a video game) but that’s how the very best comedy usually comes across – and Tales From The Borderlands makes it seem effortless. Even more impressive, there’s a healthy dose of pathos to accompany the silliness that never threatens to overwhelm or tip the balance. The Vault Of The Traveler will still make you laugh from its opening moments, but there’s a quick decent into darkness as it plays out that’s initially startling. Uncomfortable questions are asked of Rhys (and by extension, the player) that force you to take a good hard look at the carnage unfolding around you and ask yourself: Is this my fault? Was it worth it? Then you reach for a shard of glass…

It’s a bleak first act for sure, but it’s never gratuitous and the exuberant second half manages to balance the scales of enjoyment perfectly. It’s hard to go into too much detail without ruining key plot developments for what is unashamedly and undeniably a story-driven game, but the satisfying reveal of who the masked kidnapper really is presents a delightful twist which then proceeds to fuel a suitably over-the-top final battle that evokes Shadow of the Colossus, Power Rangers and classic arcade fighting games in turn. It’s ridiculous and all the more enjoyable for it.

The voice actors are obviously having a blast with their respective roles and bringing their characters to life – Rhys (Troy Baker), Fiona (Laura Bailey), Sasha (Erin Yvette), Gortys (Ashley Johnson) and Loader Bot (Raison Varner) all give impeccable performances that really drive home just how much they’ve become like a real family, for better or worse. The rest of the voice cast are all great too, with many characters returning from previous episodes (you can never have enough Nolan North after all). There is even a moment near the end of the game where you must create a vault hunter team – the relationships you’ve built up (or torn down) in previous episodes and the decisions you’ve made will all play a part in who is available during this moment. It’s a nice touch that gives added weight to decisions that perhaps didn’t feel so important at the time. 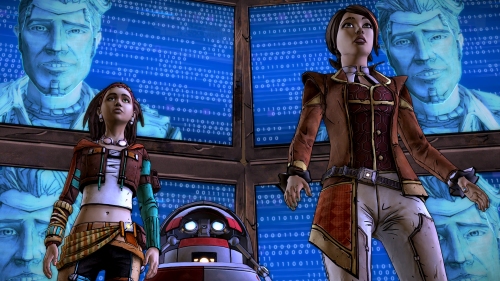 Tales From The Borderlands: Episode 5 – The Vault Of The Traveler offers a wonderful finale to one of the best games of the year and is certainly one of Telltale Games’ most accomplished and enjoyable episodic series to date. It’s hilarious, poignant and heartfelt. One particular fake out may annoy some players and the relentless pace can be a bit too fast for comfort at times, but it’s arguably worth it to end everything so satisfactorily while still leaving enough of a cliffhanger to make a future return to Pandora a tantalising possibility. Remember when video games used to be all about having fun? Tales From The Borderlands will remind you.