Zer0 Sum is the first episode of Tales From The Borderlands, a five-part episodic video game series from Telltale Games (The Walking Dead, The Wolf Among Us). Set on the unforgiving world of Pandora after the events of the award-winning Borderlands 2 (Gearbox Software) but requiring no prior knowledge of the universe (although existing Borderlands fans will undoubtedly have a healthy head start), Tales From The Borderlands puts players in control of Rhys, a Hyperion ‘suit’, and Fiona, a Pandoran con artist, as they chase after a briefcase containing ten million dollars.

Zer0 Sum begins in medias res with Rhys (Troy Baker, The Last of Us) being captured by a mysterious masked stranger, tied up and dragged across the wastelands of Pandora. The game then jumps back in time as Rhys recounts how he arrived at this moment, often unreliably. First impressions are good, but the rewind to Rhys hoping to get a promotion in Hyperion somewhat hampers the initial flow of the opening scenes. Ironically, the game truly starts to come to life when Rhys sees his former boss floating dead in space outside the window, replaced by his nemesis Vasquez – who promptly demotes him to janitor.

After overhearing Vasquez making a deal on the phone to buy a highly valuable vault key for ten million dollars from a man named August, Rhys hatches a plan with his co-workers Vaughn (his best friend ‘The Money Man’) and Yvette (his other best friend, ‘Requisitions and Lunch Leech’) to intercept the deal and purchase the key using stolen Hyperion funds. By the time Rhys and Vaughn crash down onto Pandora in Vasquez’s stolen company car and hit the ground rolling to the sound of Busy Earnin’ by Jungle (running over an unfortunate Skag in the process), the game shifts into high gear and doesn’t let up on the gas until the credits roll 2-3 hours later.

Pandora is a violent, hostile world and before long, Rhys and Vaughn (who has the money handcuffed to his wrist in a locked metal briefcase) find themselves outnumbered and surrounded by murderous bandits. Somewhat surprisingly for a Telltale Games production, especially for a game based on an action role-playing first-person shooter franchise (try saying that three times in a row!), the reliance here isn’t always on super-fast reflexes during quick time events. They’re still present in abundance, but it’s often about the choices you make under pressure rather than being presented with one option that simply relies on button pressing speed.

This is demonstrated early on to great effect when Rhys calls in a Loader Bot to fight for him and tailors its weapons (there are two weapon slots) to his preference – the game moves forward on a set path but how you’ll travel down it will always be somewhat unique. This extends to the dialogue and conversation trees too, where you can make Rhys come across like an asshole who’s actually a nice guy beneath it all… or simply an asshole. It helps of course that he’s an asshole (actual or otherwise) with an ECHO eye implant, which allows him to scan objects and reveal (often hilarious) information about them, and a mechanical right arm, which has a built-in user interface. This contrasts nicely with second playable character Fiona (Laura Bailey), who relies instead on money, smarts… and a concealed, retractable gun which contains only a single bullet. 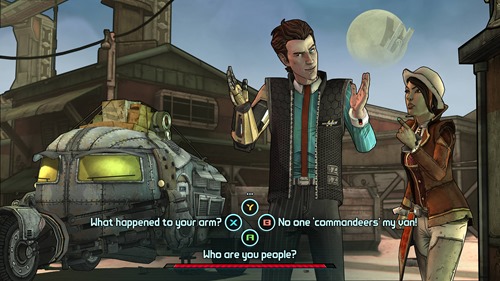 Tales From The Borderlands: Episode 1 – Zer0 Sum is a fantastic start to the series whether you’re familiar with the Borderlands franchise or not. Its told out-of-order, Tarantino-esque plot is great fun, with Rhys and Fiona playing the roles of reluctant allies, unexpected heroes and unreliable narrators all at once. All of the voice actors are fantastic, but Troy Baker in particular shines simply because he’s been so much more associated with dramatic roles in the past (The Last Of Us, Bioshock Infinite), yet still manages to make the humour sing – he’s a superb comedic actor.

Featuring the coolest sword-wielding badass since Metal Gear Solid’s Gray Fox, the most insane car chase combat sequence since the original Mad Max films and a genuinely engaging plot that will continually rap on your funny bone, Zer0 Sum is well worth experiencing despite a lack of challenge. It’s nice to see Telltale returning to their comedy adventure roots (think Sam & Max) – it’s even nicer to see them take on someone else’s world and make it their own.