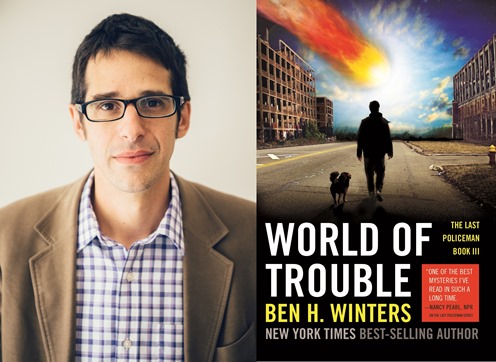 Hello Mr Winters, thank you for your time and welcome back to Alternative Magazine Online – it’s a pleasure to be speaking with you again!

Likewise. Thanks a lot.

What have you been up to since our last interview at the end of 2013?

Oh, man, you know, a lot of stuff. The Policeman books are now done being published, and I got to do a nice book tour around the US publication of World of Trouble, and it was great fun. In 2014 I wrote about half of and subsequently found a publisher for my next novel. And then of course outside of professional life there is all the joys and heartaches of regular human existence, which will be of less interest to your readers.

You released the final book in the Last Policeman trilogy last year and I absolutely loved it – in my review, I described it as “the final masterpiece in a trilogy that deserves to be celebrated and remembered for successfully finding hope in a situation so utterly hopeless.” For those of AMO’s readers who haven’t yet read it, what’s the premise of the book?

Thanks so much for that very high praise! The premise (in broad strokes) continues the adventures of Hank Palace, a (now forcibly retired) small town police detective, as he tries to solve crimes before the world ends. In this third volume, he’s trying to find his sister, who has run off with a bunch of conspiracy theorist types. 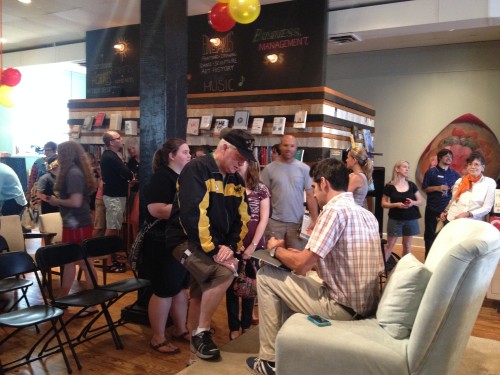 World of Trouble beings with only 14 days left until the deadly asteroid 2011GV1 will impact earth – how has the world changed and evolved since the events of the previous two books?

In a nutshell: it’s the same, but worse. Communication is increasingly difficult, so people are more and more cut off from each other. The general air of tension and dread and confusion and grief has grown and grown, so this is probably a sadder book, a graver book in some ways than the first two.

World of Trouble felt to me like the most personal of the three books – was this intentional?

No. But it’s certainly possible that the more I wrote this story, the better I got to know Hank—and the closer I got to the end of it all—the more I became emotionally connected to him and his drama, which may have made it feel more personal, for sure.

How is World of Trouble Hank different from the The Last Policeman who was first introduced looking down at the corpse of a dead insurance man in a McDonald’s toilet?

He’s grown up a bit, that’s for sure. He’s actually grown up a lot. In some ways I think that over the three-book series he experiences a process of forced maturation, a coming-to-terms with the harsh reality of life, that for most of us takes the whole long road of adulthood to accomplish. But his world is ending, you know? He doesn’t have the kind of time. So he’s hardened, he’s stronger, he’s wiser. Sadder, in some ways. But more realistic about what life is all about. 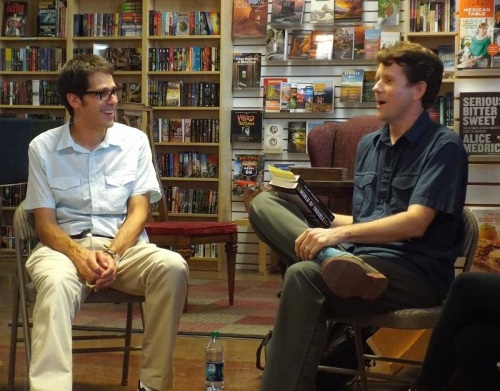 Ben H. Winters being grilled at Poisoned Pen in Arizona

Houdini the dog returns, but Hank also has a new companion in the form of the unpredictable character Cortez – how would you describe their relationship?

I would describe it as wary. Wary and symbiotic. Cortez is the kind of wily thief who Hank would have viscerally loathed back when the world was normal. But now, in these strange hard times, he needs Cortez’s help, and he is also I think able to see that the world needs people like Cortez. The same might be true in reverse, but you never reeally know what a guy like Cortez is thinking, do you?

Had you always planned for Nico Palace to play such a key role in the final days of Hank Palace?

Yes. From the beginning of writing the books I knew that his relationship with his sister would be the background in books 1 and 2, and the foreground in the concluding volume.

I know you did quite a lot of research for the first two books – was there anything new you had to research for World of Trouble?

In Countdown City I introduced a means of asteroid deflection called a “standoff burst,” and when I sat down to write World of Trouble I had to actually learn all about it. Oh, and there’s some medical business, having to do with the girl they find in the woods toward the beginning; I got to talk to a bunch of doctors for that one. Oh, and my old forensic pathologist friend taught me some new stuff about getting one’s throat cut. I do love research.

Congratulations on World of Trouble being nominated for an Edgar Award by the Mystery Writers of America earlier this year. The Last Policeman was nominated two years ago and won – what does this award mean to you?

Oh, a ton. I feel honoured to have won, and honoured to be nominated again. You just look at the list of past winners and current nominees – it’s humbling. It’s terrific. What it makes me feel like, honestly, is that I’m doing the right thing with my life.

Do you have any more news about the possible The Last Policeman TV series that we touched upon during our previous interviews?

How do you feel now that the trilogy has been completed?

I miss Hank, and I think about him a lot, and I love talking about him with folks like you, but I’m always happy to move on to a new thing, a new world. That’s really one of the great joys of this career, is that it’s project based—always on to the next, on to the next! 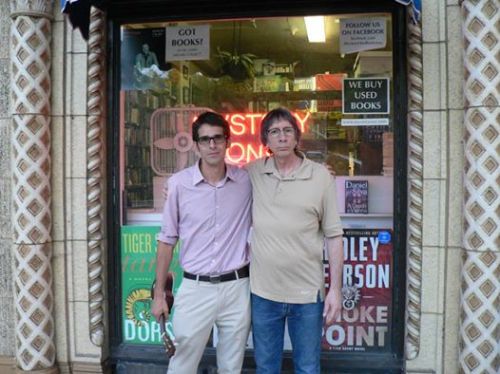 Ben H. Winters with Richard Katz at his store, Mystery One

Is this truly the end for this universe and Detective Hank Palace? Would you ever consider revisiting this world in future books or short stories?

What’s next for you Mr Winters?

I’m working on a new novel called Underground Airlines, which will be published by Mulholland, a crime imprint of Little, Brown, and by Random House in the UK. Should be out in the spring or summer of 2016.

It is absolutely my pleasure. Thanks for your enduring interest in my work. Best to you and your readers.