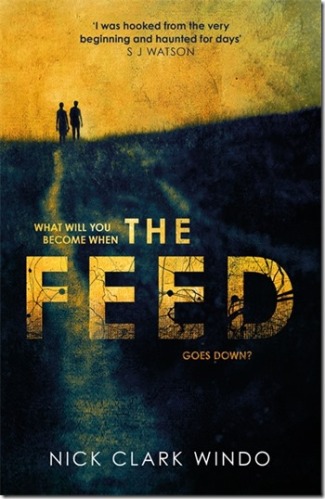 The Feed is the debut novel of Nick Clark Windo, a film producer and screenwriter living in London. Described as a ‘high concept thriller’ by publisher Headline with the TV rights already snapped up, The Feed is set in a future where everyone relies – relied – on a worldwide network called The Feed, which sends information directly into its users’ brains. What could possibly go wrong?

‘No, no, no.’ Tom clicks his fingers and the startled waiter’s gaze jerks back to him. ‘We aren’t on,’ he articulates exaggeratedly, and mimes a mouth with his hands. ‘It’s just talk-ing.’
’You’re… off?’ the waiter asks, his voice croaky through disuse.

The Feed is mildly terrifying for a variety of reasons throughout, from first page to last. The story opens with a husband and wife – Kate, a teacher and Tom, a psychotherapist – waiting to order some food in a restaurant. A familiar scene, no doubt, for many readers.

Yet nobody in this restaurant is talking, at least not out loud. The patrons sit in silence, and there are no real menus. The waiter is stunned when Tom speaks to him directly, without using The Feed. Welcome to the future.

Everyone is connected; memories can be replayed and emotions can be shared; access to information is infinite. Everyone relies on The Feed, on the technology that has reshaped humankind, for better or worse.

Then one day, somebody assassinates the President and The Feed goes dead. People start losing their minds, dying in the streets and killing each other. The plug has been pulled and there’s no going back.

Guy’s choking face flickers through Tom’s mind. It’s etched there now, with Ben’s it seems; undeletable. He blinks them both away. He sees the dark room, this small kitchen, but can still feel them, rotting inside his brain. ‘He was taken, Kate.’ He hadn’t wanted to do it. He hadn’t even wanted to say it. He doesn’t want to scare her. He  doesn’t want to be scared any more. He shrugs slowly and looks away. He won’t cry. He buries it all within. ‘There was nothing I could do.’

Six years later, what’s left of the world – of humankind – lies in ruins. Tom and Kate live with their daughter (who has never been connected to The Feed) and a small group of their fellow survivors at a remote farmhouse. There is no technology, no electricity. When night comes, they take turns watching each other. Tom has already had to strangle people to death in their sleep. Their murders haunt him.

Nick Clark Windo does a really good job drip-feeding information about what caused The Feed to go offline, what’s happened since, and why people need to be watched while they sleep. Feelings of dread, fear and paranoia intensify with each turned page. The main plot deals with Tom and Kate’s daughter being kidnapped and their post-apocalyptic journey to try and rescue her.

Unfortunately, the story being told involves a lot of walking and can seem to lose focus at times. Subplots surface before disappearing suddenly, never to be mentioned again. Furthermore, the main characters aren’t as fleshed out as they could have been, making what happens to them feel less impactful. The second half revelations are undoubtedly gripping, but getting to them can be a bit of a slog and the book as a whole leaves many tantalising plot threads dangling.

A smile twitches its lips and it waves at him tentatively. Tom lifts a hand and waves back, and it smiles fully now, this creature, revealing black and broken teeth, and a clip in its lower lip that shows brown gums. It points at him, and smiles, and then lowers a hand to its stomach. A dirty tongue protrudes from its mouth and draws slowly around its blackened lips. Then it jabs a finger at him, eyes flaring wide, and disappears from the window.

There is a lot to like about The Feed. It makes some scathing observations about our current technological trajectory as a species, with the idea that our brains could become directly linked with machines feeling far too plausible for comfort. Yet while Nick Clark Windo’s world building is excellent and his plot twist is a good one, the main story falls just shy of being truly compelling. However, there is still a lot to like here and plenty left to be explored, whether in a sequel or an eventual TV adaptation.