If Snakes of Avalon were to be anthropomorphised, there is little doubt that it would instantly be arrested on multiple drink and drug charges. Its continuation as a theoretical being would see it go on to spend mere hours in a rehabilitation clinic before all concerned realised that no amount of help could possibly rectify the situation. Transportation to a mental-health institution would swiftly follow where it would be avoided at all costs; free to live out the remainder of its days in its own alternate universe, visible to no sane member of any population… ever. Returning this review to the real world however, Snakes of Avalon is a traditional point-and-click adventure title made with Adventure Game Studio (AGS); one which sees its unabashed insanity create a charm that is difficult to deny, and all too easy to become entirely engrossed by.

The brainchild of indie developers Igor Hardy and Alex van der Wijst (The Winter Rose; Charlie Foxtrot), the game is a thoroughly bizarre journey seen through the eyes and mind of an alcoholic named Jack, for whom reality is little more than a word half-heartedly attempting to become a concept. The incredibly mixed up, inebriated mind of the protagonist means it is rather difficult for the player to discern what is real and what is not; a terrific basis for the telling of a story, and one that works superbly well in a gaming context.

The story’s lack of clarity is hinted at right from the very start, the game’s fully voiced intro displaying a somewhat inebriated Jack preparing to tell the events of his incredible tale. A man’s reliability to tell the truth in such a state will likely lead many to the suspicion that what’s about to follow is purely the ramblings of a drunkard. Given that the player’s first in-game look at Jack sees him waking up from what is likely an unintentional pub-based slumber, others may soon draw the conclusion that he has failed to tell his tale at all. Like many parts of this game, ambiguity reigns supreme.

Our alcoholic lead’s adventure takes place solely in the bar area of Avalon, the aforementioned pub from where he refuses to stray. After overhearing a man and woman planning the murder of the latter’s husband, Jack takes it upon himself to prevent it – without setting foot outside the disgusting comfort of his paradisiacal prison, of course. Given the unreliable disposition of the main character and equivocal nature of many scenes, each player will likely interpret the story in a slightly different way. Indeed, the player’s willingness to mould a personal interpretation of the strange and sometimes illogical events unfolding before them will more than likely have a big effect on their overall enjoyment.

Fortunately, the game avoids giving the player any unintentional deficits in their attempts to comprehend the story by holding a steady standard of writing with few glaring spelling or grammatical errors. Dialogue can admittedly feel a little safe and stale at times, while Jack’s lack of any meaningful interaction with the bar’s other human dwellers prevents them from stamping any real personality on proceedings. That said, it also cleverly confines the player to the same loner status as the games protagonist; a desolation that is further emphasised by his most in-depth conversations taking place with non-human characters, i.e. his ‘good conscience’ – a moose’s head – and ‘bad conscience’ – a fish. Both are given a chance to put across intriguing personalities despite the hefty possibility that they are mere figments of our hero’s imagination. Jack also fares much better and is quite easy to sympathise with in spite of his abundant alcoholism. His portrayal as a man who has been written off by one and all gives the player plenty of reason to advance through the game – not least, the hope that this down-on-his-luck bum can transform himself into a hero. 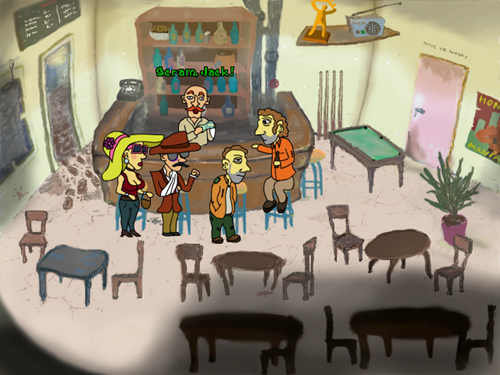 In attempting to reach such a goal, players will primarily find themselves either making inventive use of Jack’s inventory, or interacting with a particular character or object at the correct time. While puzzles range from easy to moderate, and obvious to obtuse, the select number of interactions available at any moment means progress will unlikely be halted for a frustrating period of time. If taking into account the craziness of Jack’s world, solutions are for the most part fairly logical with sufficient clues to guide the player where necessary.

Any slowdown in progress the player does encounter shouldn’t have too great an impact on their enjoyment, the game’s visual style making the one room location a strangely attractive place to look in on. Scatty and faded, the backgrounds are a suitable fit for the blurry nature of the story without compromising too great a level of detail. The contrastive character sprites are crisp, clear, and colourful, standing out superbly without looking like they’ve been dropped in from another game. Character animation is fairly smooth, with Jack in particular likely to evoke a smile as he wanders around, bobbing his head as he goes. Background animation is sparse however, and while this is not unexpected in a freeware game, the lifelessness of certain scenes does occasionally loosen the game’s grip. 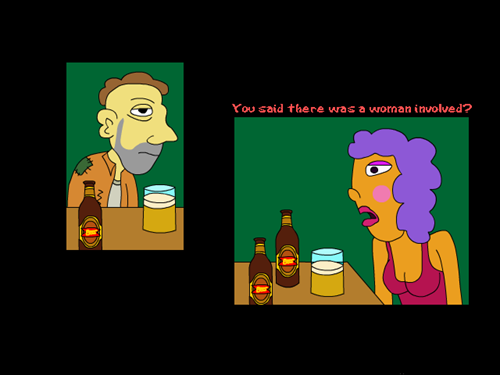 A similar point could be made regarding the dearth of ambient sound effects. The lack of footsteps, crashing beer glasses, and general chit-chat doesn’t do any favours to the game’s otherwise superior atmosphere, in particular negating the intended effect of having some of the game’s music being pumped out of Avalon’s radio. The excellent selection of music itself does however contribute significant charm; music man Thomas Regin (Blackwell Convergence) having opted for some well-fitting jazz to complement the superbly appropriate minimalist compositions set aside for the darker scenes.

Touted as a dark comedy, it is somewhat surprising, although not necessarily disappointing that there is little laugh-out-loud humour on offer here; the comedy element of proceedings serving to facilitate the madness more than anything else. There are plenty of little smile-inducing moments that are integrated into the story very well, however it still doesn’t threaten to challenge the funniest adventure titles around. Truth-be-told it doesn’t need to anyway; the intrigue and building of the story is what most makes Snakes of Avalon stand out, and it is these elements that will make it linger in the player’s mind once it’s over.

On reflection, Snakes of Avalon takes an almost theatrical approach to adventure gaming; the one location, well presented mystery and dark humoured comedic moments all being common elements of a good play. Demonstrating a unique graphical style, interesting protagonist and perhaps most importantly a thrilling story that doesn’t take itself too seriously, Snakes of Avalon is a significant addition to the freeware adventure gaming repertoire, and a title that fans of the scene will not want to miss.

Jamie Downes is the founder and lead writer of the wonderful music review website SoundSense Online. You can read more of his work at http://soundsenseonline.co.uk/