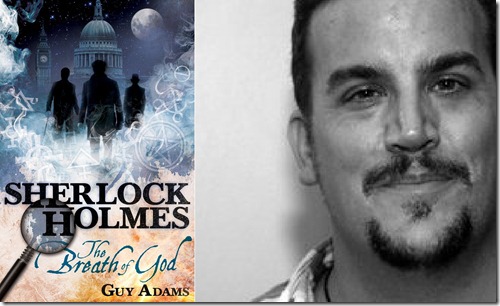 Guy Adams trained and worked as an actor for twelve years before he became a full-time writer. As DCI Gene Hunt, he penned The Rules Of Modern Policing – 1973 Edition, The Future Of Modern Policing – 1981 Edition and The Wit and Wisdom of DCI Gene Hunt. He has also written numerous other tie-in books as well as his own original works of fiction. Today, he joins AMO to discuss literary ‘Cover Versions’ in an exclusive online guest post!

Don’t you just hate boring cover versions? Plastic, flimsy shadows of the originals. Repeating a song beat for beat but with all the sexiness washed off. Save my poor ears.

Is there anything more insidious than a “modern” polish on an old tune designed to comfort those who would be put off by musical antiquity (in musical terms, anything over twelve months old)? Or the packaging of inexperienced voices embedded in old familiars, the fragile of talent wrapped in the protective bubble-wrap of solid songwriting? For every Joe Cocker there will always, horribly, be a Michael Bolton.

The only way to do a worthwhile cover is to shake the whole thing up a bit. Give it your own voice, do a Scissor Sisters rather than a Take That. OK, so the notion of “re-imagining” has taken a nose-dive thanks to Hollywood, but, as Kenneth Branagh said prior to the launch of his remake of Sleuth: “We do this in theatre all the time, a text isn’t fixed, it’s just waiting for the next director to make it his own.” Except he didn’t say that precisely. I’m paraphrasing because I can’t find the original quote. It’s a cover version. Shut up.

I’ve been playing with other people’s instruments for years. Outside my original novels, I’ve adapted Hammer Horror movies into novels; borrowed the voice of DCI Gene Hunt from Life On Mars to impart policing advice and taken various members of the Torchwood team for a spin in both a pair of novels and a couple of short stories. If there’s one question that’s often asked of me at conventions (well, other than “Where are your trousers” and “Why are you looking at me like that?”) it’s “Isn’t it boring and restrictive writing for other people’s characters?”

Well, gentle reader, that rather depends on the characters doesn’t it?

Besides, there’s always room for creativity. A story isn’t just about the characters, it’s about what happens to those characters and what those events make them do to one another.

Besides, even when working with such well-known folk as Holmes and Watson there are always new stories to tell. Mix them up with some unfamiliar instruments such as William Hope Hodgson’s Carnacki, Algernon Blackwood’s Dr. Silence, M. R. James’ Julian Karswell and Aleister Crowley and you’re bound to hit some fresh notes. It’s a new orchestra and the conductor has both a love for the classical sounds but also a compunction to find new chords. You can’t approach this kind of project without both of those firmly in place I think.

Nobody needs a lousy cover version, they want something exciting that makes them appreciate the original while also tapping a foot to the new rhythm.