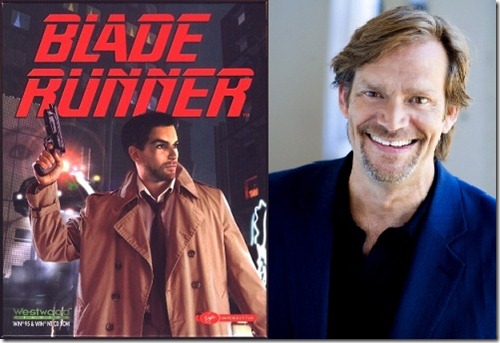 The internet’s really quite remarkable; it baffles me. This thing… this gelatinous, living thing that puts people together… matches them instantly on a common theme… exquisitely random… frighteningly specific. I graduated high school in 1979 so y’know… technologically… I’m in special ed; email though, I can deal with.

I get this email from Martin M about a month ago. He explains that he hosts/publishes/rules this happening internet thing and asks since I was the guy who did the video game Blade Runner like, 11,000 years ago… would I be available to chat about my experience? Martin’s a Brit, which sweetens any invitation; Martin’s also a class act. So… deal.

I’m an actor. Classical training. An endless resume of theatre and TV credits. At some point in 1988 I became a voice talent. In those days we actually got away with calling ourselves ‘Voice Over Artists’.  I’ve done over 8,000 commercials in twenty plus years. Sounds impressive. I guess it is. Paid some bills.

In 1997 I was between sitcoms. I get a call from my agent/manager in Hollywood; Westwood Studios of Las Vegas is very interested in me for a ‘Big Role’ in this groundbreaking new video game called Blade Runner. Now, I certainly knew what Blade Runner was… my girlfriend and I had been so awestruck by Ridley Scott’s film that we sort of forgot to make out. But video games were beyond my scope. Like what… Dungeons and Dragons or something? Paid about four grand. ‘Kay.

So I’m flown out to LA and set up at the Beverly Hills Hotel. Sweet. A guy could get laid at the ice machine at this hotel. Not just any guy… me. I’m awesome. I’m cool. I wear a very happening pager on my right hip and respond to those ‘urgent’ prompts on my new cell phone… that grey one… ’member? As big as an Italian dress shoe… whip antenna… got really REALLY hot against your ear?  BooYah.

Monday. I show up at the studio a little early. It’s a professional ‘accident’ I do. Most talent pride themselves on being late…. holding the whole game up. Buzzy’s on Melrose… right in the heart of Hollywood. I’ve done oh… 40 commercials there and feel very at home. Stale, fresh coffee, the whole deal. I’m introduced to this guy… he’s like 6’5, bald, intense and warm all at the same time. This is Joe Kucan the director. He peers through me as he explains what we’re about to do. He tells me this game will shatter the market with technology never seen before. I’m like, ‘Cool.’

That’s what you say when you’re finding your way through any new job. ‘Cool’. Just say cool. Bite your lip. Never try to beat your new boss to the punch… that’s just dumb and there’s probably a bunch you can learn if you shut up and listen. Anyway, I had my awesome pager, right? Yep. Cool. His producer… a terrific guy whose name escapes me hands me like 26 pages of copy. 26 pages for today. 26 pages would choke the best LA talent with instant throat anxiety, terror hives and terminal cancer. LA talent suck. They can’t read cold and they show up late and needy. They need time. They need chai tea. They need their mom. Some time to digest the material. Some time with their life coach.

26 pages to me is a heavy morning.

But I’m about to learn something about video games.

Mark Benninghofen voiced Ray McCoy in Blade Runner: The Game. Developed by Westwood Studios, it was published by Virgin Interactive Entertainment and released on PC in 1997.