Way back when in 2010, I was lucky enough to have Mark Benninghofen – the voice actor of Ray McCoy in the groundbreaking point-and-click adventure game Blade Runner – write a guest post for Alternative Magazine Online about his experience working on the project. Seven years later, following the release of Blade Runner 2049 – be sure to check out my review here – I decided to reread Do Androids Dream of Electric Sheep by Philip K. Dick and replay the video game from 1997. Little did I know I was about to discover a forgotten article that was very nearly lost in time, like tears in rain… 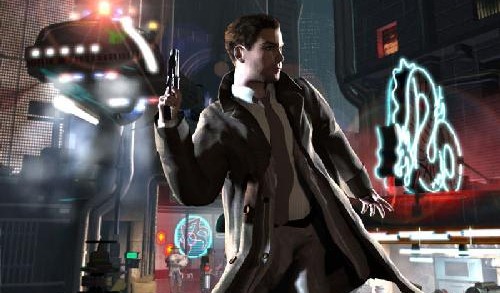 Following my recent playthrough of the Blade Runner video game I reread Mark’s guest post, which has always been one of my favourite pieces of writing featured on AMO. Looking back through my original correspondence with Mark, I was shocked to discover that he’d actually sent me an updated Word document with an extra 770 words in one of his final emails! Somehow I’d missed this for seven years and Mark had never mentioned it.

It is therefore with great pleasure – and a little embarrassment – that I present the second half of a guest post that was originally published in 2010; which is somewhat apt considering Blade Runner itself has had so many different versions released over the years! Read the original guest post here, then enjoy its conclusion below.

Consider this the Final Cut of BLADERUNNING Some Reflections on Blade Runner ’97.

Kucan explains what we’re doing in detail. There’s this new technology, he says, that allows game animators to build very highly defined characters and spaces by stretching different digital fabrics and textures over digital frameworks which, through the brand new art of motion capture, are poised to redefine the medium.

Then he talks about my job. I’m to be the player. I’m Harrison Ford. I’m you.

What do you do when you’re asked to play an iconic film character made uber-famous by Han Solo? You can’t throw up… everyone’s watching you. So you grab a copy of the script, adjust your headset and start reading. 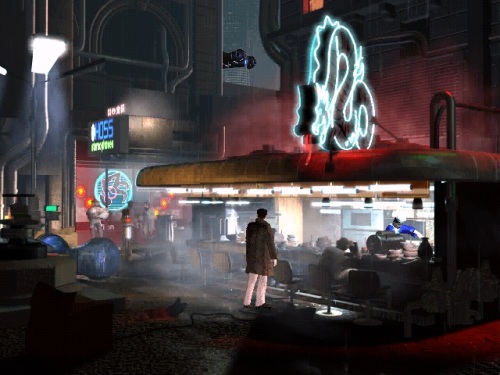 This is a critical moment for actors. Hell, it’s a critical moment for anyone. Your job has been defined. Large men who flew you in and are paying for your luxury hotel room have wrapped up the niceties and here you are… behind a half-inch of angled glass, pencil in hand, tape rolling… so… go ahead. Talk. Be him. Act. Do something. But what?

TAKE YOUR BEST, BEST INSTINCTS, DOUBLE THEM AND GO FOR IT.

I think the first line was something like… “So… here we are… it’s just us now…” that sort of thing. So I pull in close to the mic, breathe deliberately and just say it like I’m talking to my dick.

This moment has always worked for me. I count on this exact moment… their anticipation… my creativity… melding into one awesome product in real-time.

“Yeah, uh… Mark… that’s a y’know… good first swing… but I think we’re looking for something more original… y’know, not a direct lift from the film… more like our own thing…”

I agree immediately. Crap. Now what?

We spent five full days together. The first four checking off hundreds of lines of interactive dialogue, player options, alternate endings. My huge phone overheated and died. Somewhere in the middle, like after day three, I went to dinner at Citrus. Really famous place. I had no idea.

They let me in for some reason and right over there in the corner table, Mr. Sulu is holding court. I grew up with Mr. Sulu and the rest of the Enterprise crew. And there he was… George Takei. Takie. Whatever. Mr. Sulu. How cool am I… is this? Pretty cool. I had a shrimp (prawn) on some sort of weird, flavoured paper. $175. Perfect. Dinner with Sulu. I tried some amateurish shit night four at the hotel bar… I was outgunned before I walked in.

Thursday our producer’s rental car was broken into in Santa Monica. He was a very insulin dependant diabetic… super cool about it. His zip bag of insulin and needles was swiped outta the trunk. He spent that entire night trying to validate himself to the cops and later the emergency room nurses… no one believed him until he nearly lapsed into a diabetic coma. They finally gave him a shot. And refilled his RX. He somehow managed to tell me the whole story with a chuckle. Awesome guy.

Friday arrived. I hadn’t gotten laid. I wasn’t cool. I’d had a whirlwind romance with myself in the Beverly Hills Hotel. As far as I knew, we’d covered all the dialogue in the script. Twice. With safeties. So… what’s Friday about?

That Friday all those years ago was one of my favourite all-time days. I spent eight hours making body noises. They’d say… “Okay, you just got shot in the shoulder.” I’d grunt out my best shot-in-the-shoulder-shit. “Great. Now, you’ve been stabbed in the kidney and kicked in the throat and shot in the ass and you’re getting pissed.” BLUH. OOFF. BAAP.

Eight hours. Now, I work out. I’m not obsessed or anything, but I keep in shape. This single day kicked the ever-loving crap out of me. One sound at a time. Really. Try it.

I just missed the video game craze. When I was a teenager, PONG came out. Remember that piece of shit? We were riveted. For like a year. Beep. Boop. Bip.

I’m a Mac guy. I know, my bad. So I’ve never actually played Blade Runner. Or seen anyone play it. I’ve never heard me being you. Friends who spent part of the nineties locked in their apartments catching the vid game wave tell me it was awesome. I don’t know.

Set a course for Star Base Alpha, Mr. Sulu.

Mark Benninghofen voiced Ray McCoy in Blade Runner: The Game. Developed by Westwood Studios, it was published by Virgin Interactive Entertainment and released on PC in 1997.

2 responses to “FEATURE ARTICLE – BLADERUNNING Some Reflections on Blade Runner ’97: The Final Cut”