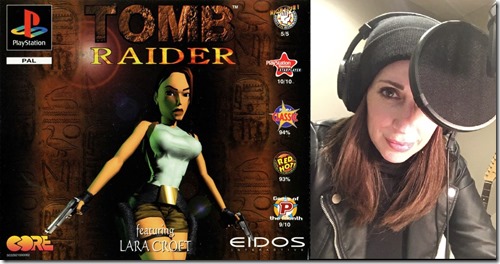 To mark and celebrate the 22 year anniversary of Tomb Raider – released for Sega Saturn, PlayStation and PC in 1996 – Alternative Magazine Online is thrilled to present an exclusive online interview with veteran voice actor Shelley Blond, the original voice of Lara Croft!

Hi Shelley, thank you for your time and welcome to Alternative Magazine Online!

Hi!! Thanks so much for inviting me.

Can you tell AMO’s readers a little bit about yourself please?

How long have you got? Let’s see. Blond is my real name… people think it’s just a made up name – my stage name – but it is my family name. I am a wife, a mother and a voice-over artist. I’ve been blessed with acting and being on stage, performed 8 shows a week in musicals in the West End, filmed many TV shows like Peep Show, Cold Feet and Cruise Of The Gods, and presented many TV shows. I’m very lucky.

Tomb Raider has just turned 22 – congratulations! Did you have any idea in 1996 that Tomb Raider would remain so popular after all these years?

I don’t think even Eidos knew how successful it was going to be.

I just thought I would record the script and never hear of it again. But it went nuts, totally blew up and we were all very surprised.

When did you first start out in the voice acting industry?

It was actually totally by chance. I was performing in a show called Only The Lonely about the singer Roy Orbison and had several roles in which I had to use different accents. After the show one evening a lady asked to meet me backstage and asked if I had a voice over agent. She said she loved my accents and voice and wanted to take me on. It was as easy as that. I didn’t have the slog of writing to agents or making tapes (it was tapes back then!) to send here and there. And that’s how I got started in voice work. 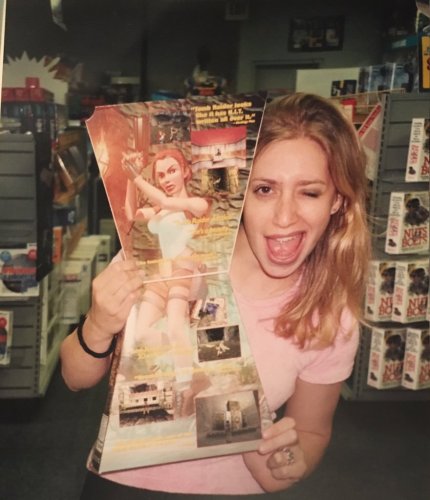 Do you remember auditioning for the role of Lara Croft?

They received it, heard it, liked it and then called me for a conference call to chat to several different people. They told me at the end of the call I had the job.

Where did you record your lines and how long did the recording process take?

I do remember that it was in a studio in London and the area Soho Square seems to flash through my head so maybe it was there but I cant be sure. There were a lot of lines but most of the session was taken up with grunts, groans, death noises, fighting sounds and screaming!! It took a total of 5 hours.

How much guidance were you given? Did you have any visual prompts?

I was directed… and given one drawing of Lara… the same one I had for my taped audition. They told me they wanted her to sound like a young female Bond. Very monotonous without much emotion. That was hard for me as I am naturally very expressive.

Did you get the opportunity to communicate with the Core Design team directly?

I am not sure who was at the session but I am sure they were all from Core and Eidos. Nathan McCree was definitely there but I have no recollection of who else was involved. I can just about remember my recording sessions from last week, let alone 22 years ago!!

I still think you’ve got the best scream in the business! Was it tough performing all the grunts, huffs and puffs?

Ooh thanks!! I do love doing effects… screaming… wailing… lots of fun!  But it is taxing on the vocal chords.

Do you remember the moment when you first realised Tomb Raider had become a major success?

I think it was when I saw Lara on the front cover of The Face Magazine on the street magazine stands. And when I was called by The New York Herald and interviewed and given a little feature in that. That was a first. 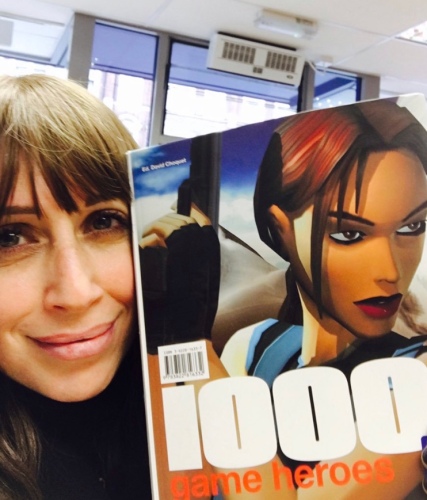 How did you feel as the game – and Lara – snowballed into a pop culture phenomenon? It must have been an exciting time for you!

Actually it didn’t feature in my life at all. I am not a gamer so it wasn’t like I was sitting at home and playing it and hearing about other people playing it. It was a job I did that I forgot about. It didn’t impact on my life at all. It wasn’t like now with Twitter and Instagram. I had no clue that people played it or liked it or talked about it.

Sadly, you didn’t voice Lara in Tomb Raider II – although Judith Gibbins did an excellent job as your replacement. What led to Lara being recast?

They called me a year later and asked me to voice the second game but by that time I was contracted for something else and I was unable to. I did however give my permission for them to use my sound bites… and they used them on games II and III. For me it wasn’t a big deal compared to what I was contracted to… it was just one job I would be missing out on and as I said because I wasn’t a gamer it didn’t really mean anything to me. Just that I wasn’t available for the job. If I had been of course I would have done it.

Have you ever met any of the other Lara Croft voice actors?

One of my really good friends is Jonell Elliot. She is one of the voices [Jonell voiced Lara in Tomb Raider: The Last Revelation, Tomb Raider: Chronicles and Tomb Raider: The Angel of Darkness] and I adore her. We texted only yesterday sending each other pictures of our kids. Jonny and I go way back. We used to do West End shows together… all singing all dancing!! And that was years before Tomb Raider happened. I don’t know any of the others. I’m sure they are all lovely.

I was surprised when you didn’t return to voice Lara for Tomb Raider Anniversary in 2007 – did Crystal Dynamics reach out to you at any point during the game’s development?

I’m afraid my knowledge of the games is poor… is that the one that Keeley voiced? If so… then yes.

They called me and said that half the company wanted to go back to the classic sound and half wanted to get a celebrity name. I told them if they wanted me I’d be happy to do it. But they ended going with Keeley. She has a wonderfully rich sexy voice. They made a fabulous choice.

Shelley with Alison Carroll at the Tomb Raider Suite concert. Alison was the live-action model of Lara Croft from 2008 to 2010.

Would you like to voice Lara again at some point in the future?

It would be a complete honour if they asked me. Now that I am familiar with the fan base since joining Twitter and having hosted the Tomb Raider Suite concerts, Lara is very dear to me. Meeting the fans of the game and feeling the global love for her has been incredible and I really am truly honoured to be her voice. The original. If they asked me and I was available I’d do it. Of course I would.

In 2016, you introduced Nathan McCree’s beautiful Tomb Raider Suite at the Eventim Apollo in Hammersmith, London. Was it fun celebrating Tomb Raider’s 20th anniversary with Nathan and the fans?

It was such a special event. You could feel the love in the auditorium. The music was out of this world and to hear it played by the Philharmonic Orchestra was truly magical. Spine-tingling. It was a pleasure and a thrill to host it and to even be asked to host. A wonderful evening. It was wonderful to meet so many Tomb Raider fans and hear their personal stories of Lara and playing the game. Unreal to think it has such a following after all this time. Lara is an icon!! 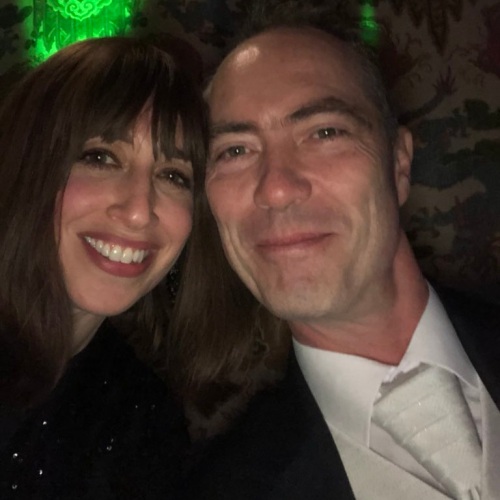 Had you ever listened to the soundtrack in its entirety prior to this event?

Nope never. I have never played the game!! My original copy is still in the original box and wrapping. Never opened!! Hearing the music at the Eventim was incredible. I was blown away.

So you’ve never played Tomb Raider, or perhaps watched it being played on YouTube?

No!! Never played it. I have watched a few videos on Twitter of people playing the game and it’s hilarious every time. People really get involved!

Did you watch the latest Tomb Raider film starring Alicia Vikander? If so, how did you feel it compared with the earlier films starring Angelina Jolie?

I haven’t I’m afraid. For no other reason than I have two young kids and it’s not always easy to get a babysitter. I go to the theatre and also go to the movies but not often; it has to be something I really want to get out and see. I’m more of a chick flick gal. Not action adventure. Although I saw the first film with Angelina… but only because a friend of mine was in it… she was the epitome of Lara in my eyes. Face, body, accent, attitude. She had it all.

My friend who was in the film with her told me she let him know she had listened to my voice on the game over and over to get the sound right!!

Where might AMO’s readers have heard you more recently?

I have been on Heart FM for the last four years as their jingle voice. I also have many regular gigs on ITV, Disney, Nat Geo Channel,  Discovery, Sky and Channel 5 advertising their programmes, as well as voicing different TV and radio commercials. My own mother doesn’t recognise my voice!! I have to say “that’s me!”

What’s next for you Shelley?

Whatever comes is a blessing. I am just grateful to be able to do a job I truly love and work constantly at it. I know I am in an extremely lucky position and it certainly doesn’t go unappreciated.

Thank you for your time! I really enjoyed replaying the original Tomb Raider recently and hearing you share some of your memories from that time has been an absolute pleasure.

Thank you so much. How lovely. It’s been a pleasure.