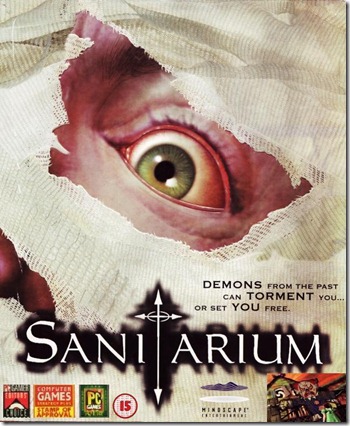 Originally released in 1998, Sanitarium is a PC adventure game created by Dreamforge and more recently re-released and made playable on modern machines by GOG.com. Despite receiving a mixed reaction from adventure outlets back in the day, it is still often cited by fans of the genre as a classic for its twisted and unsettling atmosphere. As a fan of psychological horror and thrillers across all forms of media, I was understandably excited when given the chance to belatedly discover what all the fuss was about. With the credits now behind me, I’m unfortunately no nearer to finding out. 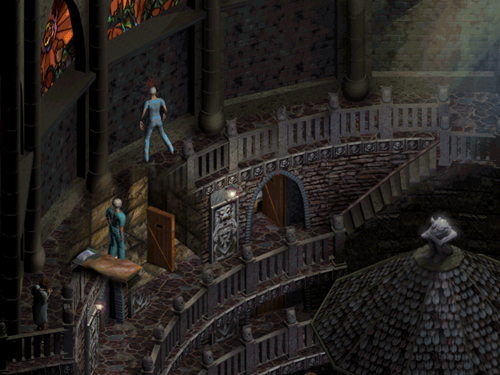 Set over the course of nine chapters, Sanitarium tells the tale of an initially unnamed man, who following a car crash, wakes up in a flame-threatened tower block of an asylum, unsure of who he is or why he’s there. Throughout the game a series of flashbacks – presented as cutscenes – help to fill in the blanks of the character’s past, and as he regains his memories, he begins to uncover the existence of unspeakable horror.

The oft-used amnesia plot device has the potential to provide plenty of intrigue, so the lack of originality can easily be overlooked. The absence of an engrossing, well-told main story however, simply cannot. Convention states that psychological horror tales must contain twists, turns and suspense to be successful; Sanitarium’s developers apparently ignored these tried-and-tested criteria and plumped instead for bland and predictable. The path of the story becomes evident far too early, with further developments failing to shock, surprise or even provide the player with any semblance of a reward for their subsequent progress.

The failings of the storytelling are made all the more disappointing as a result of the game’s effective beginning. While the short first chapter serves mainly as an introduction, the second is Sanitarium’s strongest by a wide margin. It sees our lead character – whose name is revealed as Max – whisked off to an eerie town where young, physically deformed children are living under no apparent supervision from adults. Attempting to uncover the town’s perverse secrets is an absorbing task, and the self-contained story of the chapter would have made for a wholly interesting full-length game on its own. While each of the game’s longer chapters are likewise presented in abnormal and freakish places however, only a worthy effort from the second of these comes close to replicating the success of Max’s first venture into madness; the increasing bizarreness that engulfs the latter chapters just an unsuccessful attempt to cover up a game that is all too often devoid of inspiration.

‘The makers, creators of all and of nothing…’

Frustratingly, this lack of creativity also bleeds though into the game’s dialogue, and with the story itself ambling along into nonsensical tedium, the ponderous and generic writing becomes ever more apparent; eventually becoming so dull and otiose that skimming through the subtitles takes complete precedence over listening to the game’s hit-and-miss voice acting. In fact, the strengths and weaknesses of the voice acting are almost rendered irrelevant, as with no option to remove the subtitles and the delivery often quite considered, it’s very tempting to just read the text almost from the off.

Even the much applauded atmosphere is for the most part unaffecting, although there are no doubt exceptions. The aforementioned town of children is certainly an unsettling place to be, while a section of a later chapter sees the player seeking out the residual memories playing out at a former family home. The latter brings rare moments of poignancy to a game that all too often attempts to bludgeon its point home in weird but ultimately overt ways.

Inconsistencies hinder atmosphere development too. One chapter spent in the asylum is like a deleted scene from classic point-and-click title Beneath A Steel Sky; completely out of keeping with the sincerity needed to carry the psychological aspects of what is supposedly a nightmarish horror. Likewise, a Cyclops in one of the later chapters seems to have a strange penchant for impersonating Terry Wogan, which while good for a laugh or two, is very likely unintentional and certainly not conducive to the creation of a genuine feeling of dread.

The remainder of the auditory side of Sanitarium is actually quite impressive however. Not all scenes have musical accompaniment, but those that do have well-fitting and unobtrusive pieces more often than not. Meanwhile, the ambient sound effects bring a sprinkle of life to scenes, particularly in the first half of the game; the squeaking chain of a park-swing and guttural chuckles of a model clown both examples of minor touches that enhance the atmosphere.

A further positive is Sanitarium’s visual presentation; the graphics standing the test of time quite well for a game made thirteen-plus years ago. Although traditionalists might find the unusual isometric perspective an unthinkable design choice, the often detailed and well-constructed visuals are actually one of the few aspects of the game that do not make it an intense drag to play. Some chapters are undeniably better-looking than others, but chapter six aside the standard is generally very reasonable indeed. 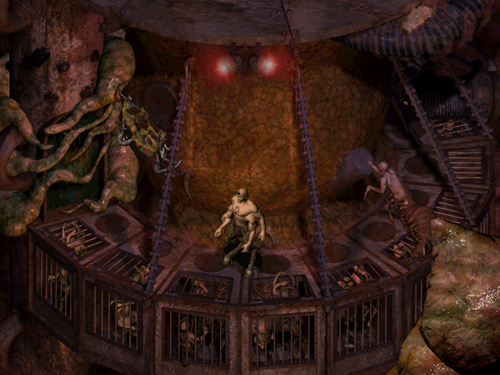 The game’s puzzles also provide a modicum of fun within Sanitarium’s murky confines. Although most progress comes from the player talking to another character, reading a document or completing basic inventory fare, there are decent attempts to offer something different, such as a hide-and-seek challenge and a short series of fun to decipher anagrams. Unfortunately, there are also some very annoying albeit far from insurmountable action sequences to overcome. Failing these does not result in a game over screen, rather it throws the player back to the beginning of the challenge. This alone doesn’t extinguish the frustration – particularly when it’s a relatively long walk back – but making use of the save-slots at least provides a quicker alternative.

Despite these relative positives, Sanitarium is still for the most part a game that spreads misery in ways it doesn’t intend, an unfortunate trait compounded by unsatisfactory controls. Reminiscent of those favoured by Telltale’s Tales of Monkey Island series, the left-mouse-button is used for all interaction, while holding down the right-button moves the character in the direction of the cursor. Without Tales of Monkey Island’s keyboard alternative however, the latter becomes extremely tedious after several hours of gameplay; the frustration exacerbated by the vast amount of walking back-and-forth done in some chapters, not to mention the poor placement of NPCs who unintentionally block potential shortcuts.

It would be unjust to suggest that Sanitarium is all bad, however the handful of interesting locations, intriguing sub-tales and decent puzzles cannot make up for the blandness and lack of imagination that characterises the game as a whole. For all its faults, the failure of the main story is what lets it down the most, and I for one simply stopped caring about the world and its characters long before the inevitable conclusion. The second half of the game is a painful chore to play through and reaching the end will likely require a healthy dose of willpower.

Some may call it adventure game heresy, but I would suggest that the popularity of Sanitarium may come down to its release at a time when the genre had not just fallen off its previously lofty perch, but was struggling to stay afloat; perhaps Sanitarium was an adventure game lauded merely for being so? The steady stream of new titles and re-emergence of old ones means there is a large selection of better adventures to be had for modern-day gamers, thus all but the nostalgic and adventure game completionist would be best advised to steer clear of this one. Those on the lookout for an unsettling, dark and depressive title would be better off seeking out the similarly isometric yet vastly superior Daemonica.

Special thanks to our friends at GOG.com for helping us with our review. Their updated downloadable version of the game can be purchased here.