Gig Posters Volume 2 features 700 incredible posters from the archives of GigPosters.com, the Internet’s premier destination for rock-show poster art of the 21st century. It also includes 101 perforated and ready-to-frame posters promoting such acts as The Black Keys, Flight of the Conchords, Ice-T, Norah Jones, Queens of the Stone Age, Wilco, and many, many more.

When did you start making gig posters?

I started making posters at the tender age of 22. Like most poster designers, I started off making really bad posters for my friend’s crappy bands. Nine years later, here I am making kind-of-all-right posters for awesome bands between graphic-design projects.

Each page showcases a gig poster from one of the 100 talented designers featured inside this book. They say an image can speak a thousand words – I have therefore included three of my favourite posters throughout this review to show just how truly stunning this artwork is. It is far too easy to forget the hard work of the designer responsible when you glimpse an eye-catching gig poster in the street – looking through this book puts all of that talent and effort into sharp focus.

The posters are gorgeous and each one has obviously been carefully chosen – there isn’t a dud to be found. A poster for the band The Get Up Kids by Clint Wilson shows a blue-black night-time sky studded with pinprick stars, a farming windpump shown moodily in silhouette. Another, designed for the band Flight of the Conchords by DKNG, shows the band members deconstructed as Lego men. I must confess that for every band I knew, there was another that I was unfamiliar with. Yet this is a book that can be genuinely enjoyed by anyone who appreciates beautiful art, alongside those who are fans of the bands featured. 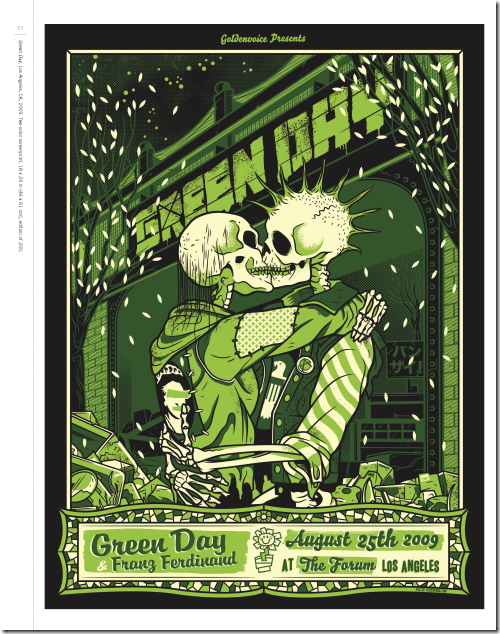 One of my earliest posters was for the Melvins. I hadn’t done much of any work at the time, but their label, Ipecac, wanted to use one of my drawings for a show flier. It was kind of a crappy poster, but I was so excited to do something for a band that I admired. Then, the same poster ended up in the movie Juno, which was super weird and awesome. The gig poster community is so completely humbling and inspiring; there are so many talented people making epic work. I can always count on seeing something rad on the Gigposters website.

Although a book full of these gig posters alone would have been still been fully worthwhile, Gig Posters Volume 2 goes the extra mile by featuring a mini-interview with the relevant designer upon the back of every single page, as well as presenting several smaller posters taken from their portfolio – including these smaller posters, the book features 700 posters in total. I am very pleased to note that the bands themselves are not the main focus of the text – the focus is squarely on the designers themselves, as it should be.

However, I was slightly disappointed that, although the questions they were asked often provided thoroughly interesting answers – and each designer also offers a website where you can go and look at more of their work – the large posters featured in the book are often not talked about in any real detail by their creators. This seemed something of a missed opportunity at times, although I can certainly understand that the book wanted to offer a much wider look at each artist’s career as a whole.

Why do you design gig posters?

I’ve worked as an artist/designer/illustrator in a variety of fields, yet always find myself returning to music graphics – it’s just fun. What could be better than listening to music and drawing all day?

Gig Posters Volume 2 repeats the success of Quirk’s earlier poster books and has exactly the same problem – by its very nature, this book encourages the reader to pull out their favourite pages and frame them… which is hard to do when it works so well as an actual book! The value for money is so great however, (the RRP is £27.50 in the UK and I’ve seen it selling for as low as £20) that buying two copies wouldn’t be such a bad idea. Although I was slightly disappointed that the individual posters weren’t dissected in further detail, this is still a must-buy for art and music fans alike.

One response to “BOOK REVIEW – Gig Posters Volume 2 by Clay Hayes of GigPosters.com”