Trüberbrook is a point-and-click adventure game developed by btf GmbH – a small production company based in Cologne, Germany – and published by Headup Games. Featuring handmade miniature scenery and a narrative equal parts Twin Peaks, The X-Files and Stranger Things, it tells the intriguing story of Hans Tannhauser, a young American scientist who has mysteriously won a free trip to the titular remote German village of Trüberbrook…

The year is 1967. Following a short prologue starring a mysterious woman at an abandoned gas station, Hans Tannhauser arrives in Trüberbrook on a rickety little bus that looks absolutely adorable as it climbs a highly detailed miniature road, turning and twisting its way to the top of a steep hill. It’s a quaint, picturesque opening that draws the player in as Hans himself is drawn in by the charm of the eponymous village upon his arrival.

First impressions are very Twin Peaks. Hans carries a tape recorder at all times and will often dictate funny little observations into it. Looking at a hotspot for a second time, the recording will play back rather than Hans simply repeating himself – a clever touch. The town itself is full of quirky locals that seem genuinely friendly, with a few oddballs thrown in for good measure. 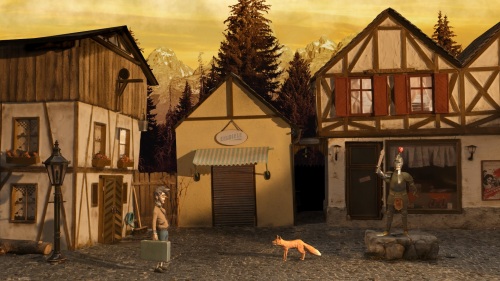 The point-and-click controls on PlayStation 4 are excellent, with the left analogue stick moving Hans while the right analogue stick snaps the cursor to each hotspot. Holding R2 makes Hans ‘powerwalk’, while R1 shows the inventory and L1 shows all available hotspots. Hovering over a hotspot brings up an interaction wheel split into four quarters; interacting with hotspots is as simple as pressing one of the four directional buttons. The only downside to this highly intuitive user interface is that inventory items are automatically selected, taking some of the joy out of puzzle solving.

The puzzles themselves are a mixture of the sensical and bizarre. While spending his first night in Trüberbrook, Hans wakes to find a peculiar glowing man in his bedroom, stealing his PhD thesis. What follows is a fairly compelling mystery involving parallel universes and plenty of scientific mumbo-jumbo that unfortunately never reaches its full potential. Yet the puzzle solving finds a pleasant rhythm and the environments are beautiful enough to make progressing worthwhile. 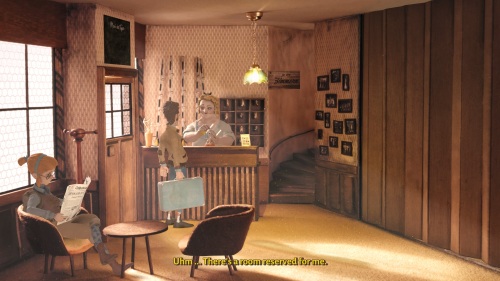 In short, Trüberbrook looks and sounds beautiful, but it doesn’t have much storytelling prowess. The game’s backdrops were built as real miniature scale models. Each backdrop was then captured with a 3D scanner, digitally polished, and blended with set extensions, visual effects – such as dust motes floating in the hotel reception area – and animated characters.

Aside from the occasional rough character animation – sometimes the game cuts away instead of showing an animation, at other times lip sync is entirely absent – Trüberbrook is genuinely beautiful. The voice acting and music is rather lovely too (especially during a musical interlude in the village square), although Tannhauser doesn’t sound American in the slightest and the subtitles aren’t as polished as they should have been. 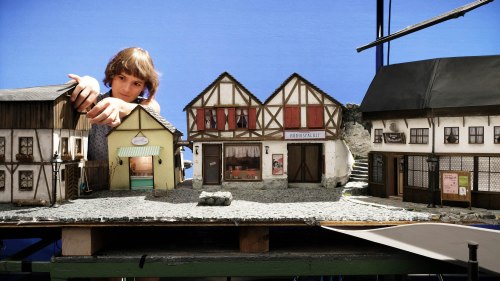 In the end, Trüberbrook is worth playing for its 6-8 hour length as both an impressive technical achievement and a charming trip to a fictional German village. It’s all so quirky it just about works; just don’t ask why everyone keeps calling a fox a cat, and try not to think about the story too much. Trüberbrook is more about the journey than the destination.