Day of the Tentacle is a LucasArts point-and-click adventure game originally released in 1993. Day of the Tentacle Remastered sees original co-project lead Tim Schafer and his studio Double Fine Productions (Grim Fandango Remastered) taking the original and updating it over 20 years later to feature all new hand-drawn, high-resolution artwork, remastered audio, music and sound effects, and the ability to switch back and forth between classic and remastered modes. They’ve also included a concept art browser and a commentary track with the game’s original creators.

Day of the Tentacle has long been considered a classic of the adventure genre. Although originally released as a sequel to Ron Gilbert’s groundbreaking Maniac Mansion released in 1988 (which is still featured in its entirety, this time in its ‘enhanced’ 1989 form, as a delightful Easter egg), it works perfectly well as a standalone experience. Its mix of Chuck Jones-esque cartoony graphics, mind-bending time travel puzzles, zany music and professional voice acting is just as enjoyable today as it was way back in 1993.

The story begins 5 years after the events of Maniac Mansion, with Purple Tentacle – a mutated creature created by mad scientist Dr. Fred Edison – drinking toxic sludge from a river that runs behind Dr. Fred’s laboratory. As a result, he sprouts arms, develops super-intelligence and decides to take over the world. Out of desperation, Purple Tentacle’s friendly brother Green Tentacle sends a letter via hamster to his nerdy friend Bernard asking for help. He explains how Dr. Fred plans to kill Purple Tentacle – and him too!

During a beautifully animated opening cutscene, super-nerd Bernard travels with his two housemates, deranged medical student Laverne and heavy-metal roadie Hoagie, to the mansion. After freeing the tentacles and learning of Purple Tentacle’s evil plans, the unlikely trio of heroes agree to help Dr. Fred by going back in time and stopping Purple Tentacle from ever drinking the toxic sludge in the first place.

Of course, everything goes wrong and after climbing into their respective Chron-o-Johns, Bernard ends up going nowhere at all while Hoagie is sent 200 years into the past and Laverne is sent 200 years into the future! The trio must now work together to get power to their Chron-o-Johns. Bernard needs a $2 million diamond, Laverne needs an extension cord and Hoagie needs electricity to be ‘invented’. Of course, nothing is ever that simple…

Day of the Tentacle works so well because the humour is consistently spot on. After the lengthy opening, players take control of Bernard and he is able to explore the entire mansion. Talking to the various crazy inhabitants is hilarious (the Edisons ended up renting out the mansion as a motel due to cash flow problems) and each room is packed with detail and interactivity.

In a prudent design move, you must play as Bernard for a certain amount of time until you can control Hoagie, and then do the same with him for a while until you can control Laverne. Eventually, you’ll be able to stitch between all 3 characters on the fly and flush inventory items between them using the Chron-o-Johns. It’s at this point that the true brilliance of Day of the Tentacle reveals itself.

The layout of each version of the mansion is roughly the same, but the environments and characters are completely different. 200 years in the past, Hoagie discovers the mansion is being used by America’s Founding Fathers as a retreat to write the United States Constitution. Benjamin Franklin is outside flying a kite and the final design for the American flag has yet to be decided upon. 200 years in the future, Laverne is stuck in a tree in a world where the tentacles rule and humans are kept as pets and entered into beauty contests!

The puzzles are superb even today. Once your brain clicks with the game’s wacky cartoon logic, you’ll find yourself solving even the most highly convoluted brain teasers. Solving the puzzles gives a constant sense of satisfaction, but there are some instances where there are so many characters, hotspots and inventory items that it’s difficult to decide what to do next. Even so, the time travel element makes Day of the Tentacle highly memorable and unique and no doubt sealed its fate as a classic in 1993. Changing the past (or the present) to affect the future is great fun and often offers laugh-out-loud results. 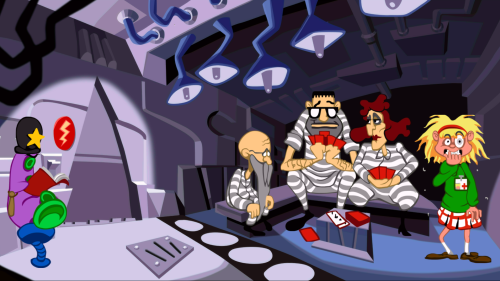 As someone who played the original game several times and therefore remembers many of the puzzle solutions, I feel a hint system would have greatly benefited this remastered edition. As it stands, I imagine many players will resort to an online walkthrough at least once during their time with the game. Thankfully, even when taking a quick look at the answers online the revealed solutions feel fair the majority of the time. Gamers were no doubt a lot more patient in 1993 than they are today!

In terms of the remastering process, Day of the Tentacle Remastered is a knockout. The 100% new hand-painted, high-resolution artwork looks absolutely stunning – remaining completely faithful to the stylised look of the original game – and the remastered high quality voices, sound effects and music make the experience sound better than it ever has before. It never gets old switching between classic and remastered mode with the click of a button. The controls have also been updated, replacing the verb bar with a new verb dial. However, purists needn’t panic – the user interface and experience is highly customisable, with mix and match options for both old and new play styles. So, if you want to play with the verb bar in remastered mode, or the new verb dial in classic mode… you can! 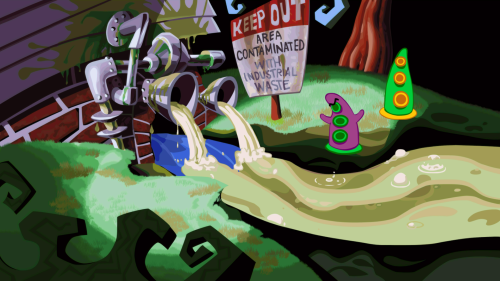 Day of the Tentacle Remastered rounds off an impressive package with a commentary track featuring original creators Tim Schafer, Dave Grossman, Larry Ahern, Peter Chan, Peter McConnell and Clint Bajakian (similar to the commentary track in Grim Fandango Remastered). Their insight is fascinating and it makes you really appreciate just how much work went into the original game. The only downside is that sometimes it can drown out the dialogue during cutscenes and it’s impossible to tell if you’ve already triggered a particular piece of commentary. However, these are minor complaints.

Day of the Tentacle has remained a classic for over 20 years with good reason and Day of the Tentacle Remastered is by far the best way to experience this wacky, zany, utterly crazy adventure. It’s admittedly starting to show its age but whether you’re a longtime fan or this is your first time visiting the mansion, this 1993 gem has stood the test of time beautifully. As Dr. Fred would say: “Step One: Find Plans. Step Two: Save World. Step Three: Get Out of My House! Let’s get crackin’!”

One response to “GAME REVIEW – Day of the Tentacle Remastered (PC)”