The Walking Dead: No Time Left is the fifth and final episode of a five-part episodic video game based upon Robert Kirkman’s The Walking Dead series of comic books. The various twists and turns of each previous episode have all been leading up to this moment – Lee Everett is pushed to his absolute breaking point, Clementine needs him now more than ever… and there is no time left.

The Walking Dead: Episode 5 – No Time Left follows on directly from where the previous episode ended, with Lee being taunted by Clementine’s kidnapper via walkie-talkie. Lee is determined to save Clementine no matter what, but he is a mess. He’s been bitten on the arm by a walker and he doesn’t know how long he has left. Several minutes into Episode 5 and you already have to make your first impossibly difficult decision – keep the arm or lose it? You’ll probably ‘turn’ either way, but losing it might buy you some time. On the other hand (no pun intended), you’ll lose some mobility if you do decide to go for the chop. Decisions, decisions.

The fact that this is one of Episode 5’s easiest choices to make should tell you something – Telltale Games is pulling no punches. No Time Left is the darkest episode yet by far, a season finale that isn’t afraid to mentally and physically scar its protagonist as he tries to keep his promise to the 8-year-old girl in his care, whatever the cost. It’s heart-breaking to see Lee so downtrodden, but it’s also riveting to see the fierce determination in his eyes, a determination mirrored by each individual player as they try to make the right choices in a world where right and wrong have long since departed for shores unknown.

Episode 5 never stops moving and the player always has some new obstacle to overcome. A rooftop to escape from, a group member to rescue, plans to be made, realities to be faced. Lee Everett was on his way to prison in the first episode and his dark past has never been a secret (at least for this reviewer)… but none of that matters now. Each player will have made different decisions over the course of the previous four episodes, and each of those decisions mattered. Clementine’s kidnapper is a pool of reflection, a reminder – this is a new world and the rules have changed. Zombies, bandits, cannibals, kidnappers, survivors… this is a world full of monsters and doing the right thing never comes easy.

I don’t mean to be intentionally obtuse. This is probably the most difficult episode to review because by this point the experience will be so specifically tailored to each individual player. For example, I never got along with Kenny from Episode 2 onwards – we could never see eye to eye. Some of Episode 5’s finest moments are simply conversations. Mending bridges, trying to hold the group together, realising that not everyone is going to make it. Sitting in a chair opposite a stranger, emotions raging, ashen-faced, angry and afraid. The relationship between Lee and Clementine is one of the strongest there has ever been in a video game. Her absence for the majority of Episode 5 is unsettling and it’s all too easy to place yourself in Lee’s grime-slicked shoes. 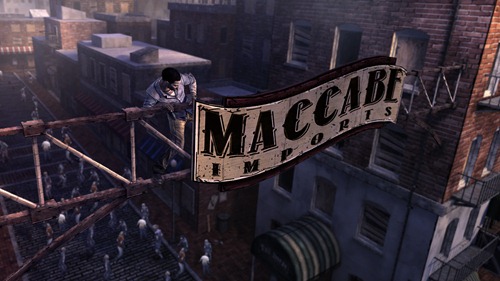 Dave Fennoy as Lee has been fantastic from the very first episode, but in No Time Left he takes his performance to a whole new level. Every single line he speaks is imbued with genuine pain and emotion. He’s one of the finest adventure game protagonists ever created and he is voiced by a true professional at the height of his game. Matching Fennoy every step of the way is Melissa Hutchison as Clementine – when she finally appears, her voice acting is incredible. Watching these two characters interact has always been a joy. In No Time Left, they will completely destroy you emotionally, guaranteed.

The rest of the voice cast is of a similar high standard and this is of the utmost importance to note. The Walking Dead: The Game only works the way it does because of the performances. A new standard has been set for both Telltale Games and video games in general – never again will shoddy voice acting be acceptable. These feel like real people and as a result each situation has tremendous impact – we’ve got to know this group of survivors over the course of several months and every loss weighs heavy upon our shoulders and our hearts. The graphics are beautiful despite their blood-spattered grimness and the facial animation – in particular during the final moments – is superb.  Long-time Telltale Games collaborator Jared Emerson-Johnson’s score, which perfectly accompanies the on-screen action and heightens every single moment, also deserves special mention.

The Walking Dead: Episode 5 – No Time Left is a tear-jerking masterclass in interactive storytelling. It is undoubtedly Telltale Games’ magnum opus, a bona fide masterpiece that will be talked about for years to come. When the end credits role, accompanied by Alela Diane’s ‘Take Us Back’, you’re probably not going to know how to feel. There are no easy decisions, there are no easy answers and the ending is difficult to come to terms with, soul-destroying and absolutely pitch perfect. Not only is this without question game of the year, it has also set the bar for every subsequently released adventure game to follow in its devastational wake. Take a good hard look at yourself in the mirror after it’s all over. Can you hold your own gaze, or do you have to look away? The Walking Dead’s greatest achievement is that it will reveal something about each individual player – and how many games can truly say that?

Leave a Reply to Son of Prometheus Cancel reply