Alternative Magazine Online recently reviewed the twenty-third James Bond film Skyfall, describing it as “a beautifully understated outing for the world’s most famous secret agent that marries breathtaking action and exotic locations with sincere depth and characterisation.” Bond On Set: Filming Skyfall by authorised Bond stills photographer Greg Williams is a large hardback book that offers a spectacular portfolio of photographs capturing the cast and crew of Skyfall as they go about making the film. 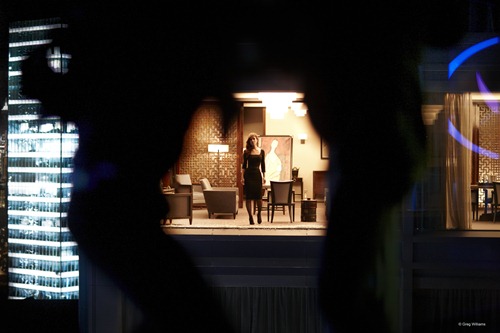 Bond On Set: Filming Skyfall contains very few words between its covers. It may be an old cliché, but it is often said that a truly good photograph can speak a thousand words and that is certainly the case here. This isn’t a book that concerns itself with staged ‘Unit Photography’ (not that there is anything wrong with official film stills of course), but rather an often candid behind-the-scenes look at Skyfall as it is being created.

The book is split into sections, with each section composed of several different subsections. For example, the book begins in Istanbul (as does the film), with photographs featured from the ‘Hotel Room’, ‘Market Square’, ‘Grand Bazaar’ and ‘Train’ sets and locations. Each photograph is accompanied by a brief caption (e.g. Pages 14 and 15: Roger Deakins’ lighting design brilliantly suggests the hot Turkish sun streaming in through the window and illuminating the dying agent.)

Bond enters. Eyes take it in.

And a dying MI-6 agent on the floor. Gasping for breath. Eyes pleading up at Bond.

The book also features excerpts from the shooting script (as demonstrated above), littered with restraint throughout to achieve maximum impact. These snippets give a sense of context and offer far more information than a detailed analysis of each photograph ever could. It’s wonderful to see how the script was brought to life. I previously mentioned how this isn’t a book that concerns itself with staged ‘Unit Photography’ – so, just how do the photographs here differentiate themselves from the usual publicity shots?

This is Greg Williams’ fourth ‘Bond On Set’ book and it has been a dozen years since he first became involved with the world of James Bond. It is immediately obvious that director Sam Mendes gave Mr Williams unrestricted access to the Skyfall shoot. Many of the photographs reveal the film’s crew members, who are usually hidden out of sight behind the camera. It is also obvious that the cast and crew were willing to play along: some of the best photos involve the actors simply goofing around or relaxing between takes.

For example, one of the most striking images featured is a black-and-white shot of Daniel Craig taking a photo of Greg Williams as he snaps him back, with co-star Bérénice Marlohe and yacht crew member Amir Boutros laughing by his side. This double page spread captures the moment perfectly and is a real gem in a book crammed full of them.

There are so many little details to be soaked in and discovered. Look closely at pictures of Daniel Craig taken during a stunt and you may well notice the outlines of kneepads beneath his suit trousers. Elsewhere, actor Javier Bardem (who plays the film’s villain, Silva) can be seen wearing trainers as a scene is shot that won’t show him below the waist. Green screens can be glimpsed throughout (often in places you wouldn’t expect) and it’s simply incredible how many outdoor locations were actually shot at Pinewood Studios – including the entrance to The Floating Dragon Casino in Macao Harbour, which was actually shot in the ‘Paddock Tank’.

Mere words could never hope to do Bond On Set: Filming Skyfall justice. It’s a gorgeous 208 page book that features some of the best film photography one could hope for. Skyfall is an extraordinary Bond film and it deserves an extraordinary photography book – Greg Williams has more than delivered. Every single photograph is a delight to look at and tells its own unique story. Fans of James Bond, photography and the process of filmmaking will be in 007 heaven. Exquisite.

One response to “BOOK REVIEW – Bond On Set: Filming Skyfall by Greg Williams”