In 2011, Alternative Magazine Online interviewed legendary adventure game designer Jane Jensen about her latest game Gray Matter, which we described in our review as being “destined to become an adventure gaming classic.” In 2012, Jane announced the formation of Pinkerton Road, a new independent studio devoted to developing adventure games with “deep and compelling storylines.” The studio will be partly funded via Kickstarter – you can help them reach their $300,000 funding goal by clicking here. Read on to find out more about the new studio and the exciting adventure games being planned in an exclusive online interview between AMO and the fabulous Jane Jensen!

Hello Mrs Jensen, thank you for your time and welcome back to AMO! We last spoke almost a year ago following the release of Gray Matter – what have you been up to since then?

I did a few more games with Oberon including Dying for Daylight and I have done some work in social gaming.

You recently announced that both yourself and your husband, composer Robert Holmes (who we also interviewed on AMO last year), have formed Pinkerton Road, a new studio devoted to creating adventure games. How long has this new studio been in the pipeline?

We began thinking about it last Fall and we started a self-funded kid’s e-book called Lola & Lucy’s Big Adventure to help finance the studio. But it was still in the ‘what if’ or ‘someday’ category. Since Christmas it has really blossomed and solidified into a specific business model and roadmap for a full-on adventure game studio.

The new studio is named after the Pennsylvania farm both yourself and Robert own and will also be based there. What made you decide to locate your headquarters there and what benefits does this location offer?

When we bought the farm in September 2010, it was not a remote inkling to have a studio here. We bought it because we’re very much into animals and organic care of the land. But as we’ve spent time here, it’s been so inspiring and peaceful we realised it’s the perfect place for a studio. One of the things we both loved about working at Sierra was that it was in the mountains of California, in a small town. That’s the kind of vibe we think Pinkerton Road will have. It’s a beautiful place to work. And we’re only a few hours from Philadelphia and New York for voice-over and, if we need it, blue-screen.

Will you be working in collaboration with any external development teams?

Yes, initially we will do development with external teams. I have worked with several great teams recently on other projects that we plan to use again for Pinkerton Road.

Community Supported Gaming (CSG) is a vital component of the new studio – what can you tell us about this concept?

I have been watching the CSA movement for a few years – that’s Community Supported Agriculture. We were CSA members of an organic farm for a few years before we bought this place, and it was great to really get to know a farmer and get healthy food right out of his field. And the CSA model has been used for other things like gourmet ice cream clubs and artesian cheese or dyed wool… So we thought it would be an interesting model to apply to a game studio. The idea is that you become a CSG member of the studio – by pledging to our Kickstarter campaign – and you get everything we put out that year, plus you’re a part of our studio family and get regular updates on our work in progress and participate in our beta program and player insights tests.

How does this idea tie into the studio’s currently running Kickstarter campaign?

We’re using Kickstarter to sign up our first year’s CSG members. So you pledge to the campaign and you become part of our CSG. Kickstarter makes it really easy to manage big email lists and different pledge tiers.

Is Kickstarter the sole source of funding? Is the $300,000 target enough to make a quality adventure game?

It’s not the sole source of funding. We’re putting in some funds ourselves and our dev team is going to be working at a lower rate in exchange for rev share. So approximately half the project is funded by Kickstarter.

What benefits will CSG members be able to enjoy? Will people late to the party still be able to buy the studio’s games once they have been released?

Our games will be released through the normal channels, but our CSG members will get them first in an exclusive release. Also, there are a variety of rewards for the different CSG tiers – things like t-shirts, posters, game art, digital soundtracks, and many other items. But I think the coolest thing the CSG members will get is regular video updates from the studio showing the latest art and discussing the progress on our games and the chance to beta test. At the $250 and up level, CSG members are also invited to an annual open house at the Pinkerton Road farm/studio in Pennsylvania, complete with a Scarlet Furies concert. For us, it’s a great way to build up a loyal following that we can get feedback from.

There are three game concepts currently proposed: Gray Matter 2, Moebius and Anglophile Adventure. Can you tell us a little bit more about each of these games?

In Gray Matter 2, Oxford neurobiologist Dr. David Styles and street magician Samantha Everett investigate the genetic heritage of a dead girl who was able to start fires with her mind. They travel to her home town on a Scottish island where the islanders are very protective of their secrets.

Moebius is a metaphysical mystery series along the lines of Gabriel Knight or my novel, Dante’s Equation. The main character is a very high-end antiquities dealer and he travels all over the world to find his unique treasures. He’s hired by a mysterious billionaire to investigate and document a series of events. As he’s investigating he starts to realise that these events have a bizarre significance.

Anglophile Adventure is a tongue-in-cheek name for a project I’ve long wanted to do. I’m a big fan of Jane Austen and Thomas Hardy. The game is set in that Regency England place and time and is a romance/mystery involving a small landholder’s daughter who disguises herself and becomes governess at a great estate in order to discover what secret the Viscountess held over her father. The art is amazing.

You can see these three concepts and read more about them on our Kickstarter page: http://tinyurl.com/pinkertonroad-csg

Kickstarter pledgers will be able to vote which game they would like to see first – does this mean only one will be made, or will all three eventually see the light of day?

I hope to make all three games eventually. I love them all.

Do you have a personal preference regarding which game you would like to tackle first?

No, I am passionate about all three, so we’ll let the voting decide it! (The vote will take place April 14th-15th and will be open to all backers who have donated $16 or more to the campaign.)

I absolutely loved Gray Matter, as I am sure you could tell from my review. Were there any legal issues involved with securing the rights to create a sequel?

When I did Gray Matter I was able to retain the IP rights to the series. 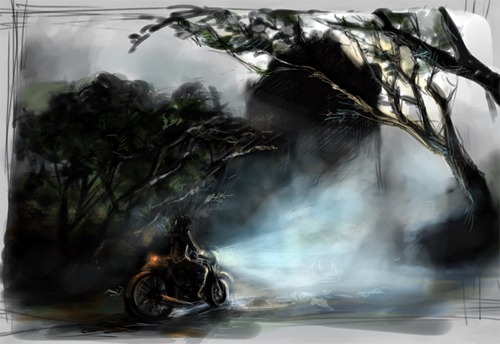 Gray Matter had a protracted development history – will founding Pinkerton Road and having full creative control over the games you make help to avoid such situations in the future, for example if you decide to make Gray Matter 2 once the votes are in?

Yes, that’s certainly a big part of the impetus behind the studio – to have better control over the process from start to finish. Gray Matter was admittedly a very long and at times difficult production. I was working full-time for Oberon during that period so I was not as involved as I would have liked to have been.

Of course, the announcement of the new studio also has Gabriel Knight fans excited – legalities aside, would new Gabriel Knight adventures be something that you would be interested in pursuing with Pinkerton Road in the future?

Yes. I have spoken to the IP holder a number of times in the past, and again just recently (Activision owns the rights now). There is a good opportunity for a GK to happen with Pinkerton Road, it’s just not likely to happen quickly. I think once we can show we’ve shipped a good game, it will be quite doable.

Will Mr Holmes be composing the soundtracks to all of the studio’s games?

Yes. I think he’d never forgive me if I tried to pry any of that away from him!  Besides, his music suits my games quite well.

Raleigh Holmes was hilarious and very entertaining in the Pinkerton Road Kickstarter video – will she be actively involved with the studio too, perhaps with her band The Scarlet Furies?

I’m sure we will have some new Scarlet Furies music for the games and you will likely also see her doing voice-over. She’s a very talented actress and is currently voicing the lead for Cognition: An Erica Reed Thriller. She also does the narration for Lola & Lucy’s Big Adventure. She just recently shot her first feature film in L.A., a film called Crawlspace.

It must be very fulfilling to work so creatively with your family – how does it feel going 100% independent?

Scary! And exciting. My family is great – I’m lucky to have such a talented husband and step-daughter and we love working together on projects. They’ve been super supportive about the new studio. It just felt like it was high time to do this and get back to doing what I really wanted and loved to do – adventure games. I believe that if you know where you’re going, the universe ‘gets out of the way’. And I believe very strongly that we can make Pinkerton Road a great studio.

Are you still working with Phoenix Online on Cognition: An Erica Reed Thriller?

Yes, I am consulting on that project. When I met Cesar and Katie and the rest of the Phoenix Online group, they were so sincere and so enthusiastic about making adventure games, I just wanted to help them in any way that I could.  I think they’re doing a great job on the project.

What long-term plans do you have for the Pinkerton Road studio?

I envision it as a well-respected little studio with several good designers, maybe putting out 4-5 titles a year. That would be wonderful!

AMO would love to invite you back for another interview once the studio’s first game ships if that’s okay?

Thank you for your time and good luck to both yourself and the rest of the team at Pinkerton Road!