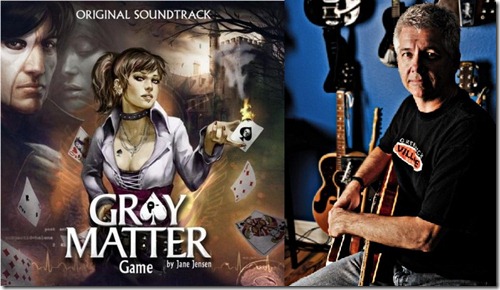 Robert Holmes is an American composer best known for his work at Sierra Online, where he composed the music for the Gabriel Knight series of adventure games created by Jane Jensen (his wife) throughout the 90’s. Most recently, he contributed to the soundtrack of Jensen’s long-awaited adventure game Gray Matter, both as composer of the general score and as a musician with his band The Scarlet Furies. It therefore goes without saying that AMO is delighted to present an exclusive interview with Robert where we discuss this project, the Gabriel Knight series and more!

Hi Mr Holmes, thank you for your time and welcome to AMO!

Thanks for having me! Always a pleasure to speak to the UK, a favourite place of mine indeed!

Well… in my early days of growing up in California, I played in some really great bands around LA, which eventually evolved into being a composer for Sierra Online in its heyday, and for the Gabriel Knight Series. I also have worked as a producer in digital content with folks like the wonderful artist Sting. In recent years, I have been fortunate enough to work with some of my great old friends in the band The Scarlet Furies with my daughter Raleigh Holmes and to do the score for the most recent Jane Jensen adventure game Gray Matter. 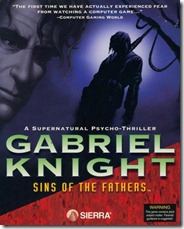 You composed the music for the Gabriel Knight series of video games. What was your involvement with each instalment of the series?

I was the producer of the first Gabriel Knight game and the composer on all three. I had left Sierra to work with Sting by the time GK2 and GK3 came about, but I worked with the team remotely on the score.

Which Gabriel Knight game was your favourite to work on and why?

I would have to say GK2. I was fortunate to work closely with Jane as she was developing and researching it, which made for some wonderful trips to Germany to learn about King Ludwig and Wagner’s music. From a musical perspective, it was a very rich and emotional subject to work on, and having Jane ask me to do a “lost Wagnerian Opera” was an exciting and elevating challenge!

Did you work on any other Sierra games?

I also worked on a Hoyle Classics game as producer and composer, and as a composer on some Space Quest and Kings Quest projects under the great Mark Seibert.

Am I correct in saying that during your time working at Sierra on Gabriel Knight, you met your wife Jane Jensen?

Yes, I was assigned as her producer and composer. One thing led to another and we ended up lifelong partners!

You composed the soundtrack for the new Jane Jensen adventure game Gray Matter, as well as contributing with your band The Scarlet Furies. Of course, Jane is your wife and the lead singer of the Furies is your daughter Raleigh! How does it feel to be working alongside your family like this?

It’s such a great pleasure and gift to have the opportunity. And, they both make me look really good! 🙂 Really though, they are both such enormous talents, and obviously two of my favourite people!

Is it easier or harder to work with people you are extremely close to?

Both I think. Easier in that there is a lot of communication that is effortless and easy, and harder in that you have to work very hard to protect other parts of your relationship if things get tough or challenging. We all try to stay very aware of how much we mean to each other and how much respect we have for each other’s talents.

When composing the general game score, how extensively did you collaborate with your wife?

We always work very closely on these. It’s important that the musical approach is working as another character in the story, so I like to understand Jane’s goals and approach when working on it.

How much free reign are you generally given when working on a project such as this?

At the end of the day, it’s Jane’s baby – but she has always given me plenty of room to approach the work as needed from a musical standpoint. We are usually very similar in our sense of whether something is working or not, so that really helps. 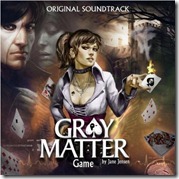 What genre of music would you say the soundtrack belongs to, if any?

Well, it has two flanks really. The general score is pretty traditional underscoring, with an emotional edge as you might see from some of my favourite film scores. The other aspect is the Scarlet Furies tunes which are what we call Gothic Folk. Dark, thoughtful folk tunes, with lots of vocals and acoustic textures.

Who inspires you, both musically and creatively?

My very dear lifelong friend Buck Wilcox who is one of the main writers and members of The Scarlet Furies has been a hero and inspiration to me since my early days in music. It’s a thrill to be working with him and all the guys in The Scarlet Furies again! Creatively, I have a deep admiration for folks like Irving Thalberg and other pioneers of film’s golden age, and musically many many artists from the 1930’s through the 1970’s had a huge impact on me. Obvious ones like The Beatles, but others as well like Max Steiner, the bands Yes and early Genesis, Elton John, Stephen Stills, Aaron Copland, the list goes on and on…

How did working on Gray Matter differ from your past experiences whilst working at Sierra?

It was a bit different due to the international aspect of the teams, and involving The Scarlet Furies. Just a slightly more complex  mix of options and assets, which was a good problem to have!

What did you think of the finished game?

I’m very excited about the game. It’s so great to see Jane’s storytelling again in this type of venue, and I am very proud that the music seems to serve that goal very well. It’s really rewarding to have people responding to the game and The Scarlet Furies due to its release. 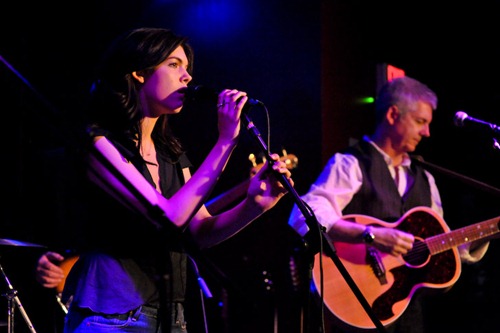 The contributions from your band The Scarlet Furies are absolutely superb! Where they written specifically for the game?

Actually, no. We had recorded most of them many months before, but they just seemed to fold into the story very well. We did write specific lyrics for the main theme to tie to the story, but beyond that The Scarlet Furies songs were things written by Buck Wilcox and Raleigh Holmes, or myself prior to the game.

How did the band originally come together? Can you briefly tell us about the other members of the band?

Myself, Buck Wilcox (song writing, vocals, guitar), Ian Francisco (vocals, bass), and Steve Hilstein (percussion) all grew up together playing in bands throughout school and afterward. Then over the years we all went separate ways. Many years later my daughter Raleigh (lead vocals and lyrics) started her acting career in LA and was looking for a band to back her up in a showcase. I found the guys over Facebook, and we reconnected after 20 years, built the band around Raleigh and have spent the last 2 years writing and performing together again! 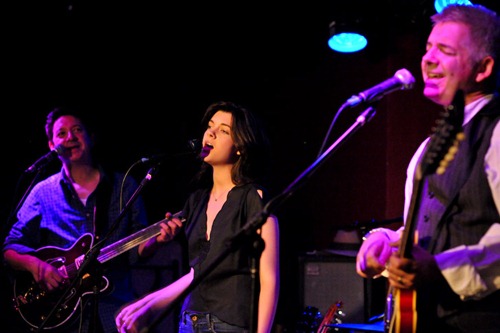 I think that the general game score compliments the songs performed by The Scarlet Furies perfectly! Is it satisfying to be involved both as a composer and a performer on a project such as this?

It really is! I am so fortunate to have the opportunity to do both! Like working with Jane, it’s great to have partners you have such respect and admiration for, and confidence in what they will provide.

What was your favourite song to compose for the soundtrack and why?

The main theme is my favourite. It has a great melancholy nature to it, I’m a sucker for very emotional dark themes. 🙂

What tools did you use to complete the game’s score? How does the modern day creation process differ from when you worked on the first Gabriel Knight game in 1993 for example?

Back in those days we had to create the scores using midi for very narrow technical delivery systems. Depending on what set up a player had, your score could sound like music or just a series of bleeps! These days, I can record the work in any way I want as audio and have that final production presented in the game. A huge difference! I do most of my work in Digital Performer in my studio at home.

Is Gabriel Knight a series you would like to revisit again in the future?

Absolutely! There are many of us, including Jane and I who would love to see that come to pass. I’m hopeful there will be a chance to see that happen someday! 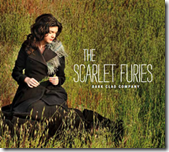 Can you please tell us more about The Scarlet Furies’ new EP, Dark Clad Company? Will there be a full album to follow?

The EP includes 5 Scarlet Furies songs as well as a cover of Nirvana’s Heart Shaped Box. It was recorded in LA and produced by another old band mate of ours, Rusty Anderson, who is the lead guitarist for Paul McCartney. It seems to be doing very well and we are getting some great feedback and press on it. We hope to follow it with a live CD sometime in the coming year… 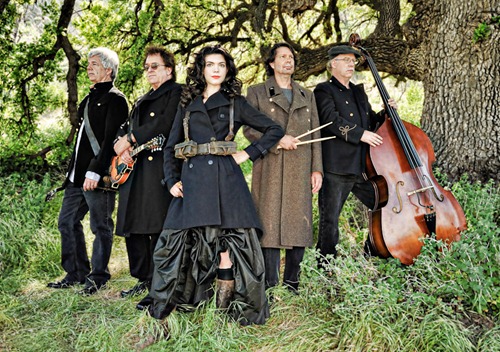 What is next for the band?

We will be playing shows and festivals in the US this year, working on a live LP and some videos hopefully. Raleigh is continuing to also build her acting career and we have many new songs we are anxious to record. And then who knows, maybe a trip to your beautiful country at some point!

Do you currently have any other projects planned as a composer?

There is a wonderful independent film in the works I will be working on. But it’s funny, Jane seems to be the only game designer who ever hires me for games! 🙂

It has been an absolutely pleasure to talk with you Mr Holmes, thank you for your time!

My pleasure! It’s very rewarding to have folks listen and appreciate the music. Thank you!