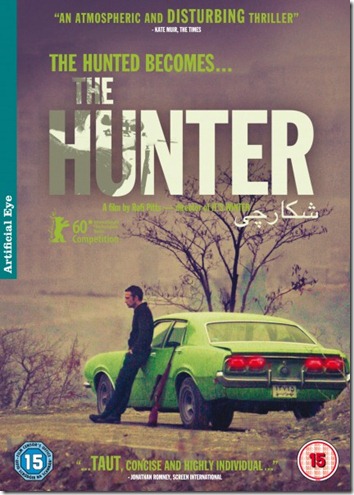 The Hunter is an Iranian film originally released in 2010, directed by internationally acclaimed director Rafi Pitts. Pitts also stars as main character Ali Avali, a man recently released from prison who is forced to work monotonous night shifts to support his wife and child. Suddenly, tragedy strikes when Ali’s family are involved in a police shootout. Pushed over the edge, Ali grabs his hunting rifle and positions himself above a busy city highway, taking aim at an approaching police car and sealing his fate forever… The Hunter was released on DVD  on the 28th February 2011 in the UK by Artificial Eye.

The Hunter is a film that will undoubtedly divide audiences. Ali Avali (Pitts) is a silent, brooding protagonist. He moodily saunters through the earlier moments of the film with only the occasional wisp of a smile visible upon his face. Then tragedy strikes, his family disappears and his face becomes set, impossible to read, with eyes that shift between fury and vacantness. Almost a silent film at times, The Hunter still manages to say plenty with its effective use of visual imagery.

The opening shot of the film, which shows an image of the Islamic Revolutionary Guard Corps celebrating the first anniversary of the Iranian Revolution, immediately lets the viewer know that Pitts has something to say both as a director and leading man. Sadly, much of this context will be lost on the less informed viewer. I must admit that I counted myself as such a viewer upon my first viewing of The Hunter: the wider scope of the film hardly resonated with me at all until I did some Google sleuthing long after the final credits had rolled.

Still, Pitts convincingly manages to portray an environment where people could believably become so detached and hopeless, even to audience members who will be less familiar with the overarching themes of the narrative. From the ice cold visuals – frosty even during scenes set in the glowing sunlight – to the relentless barrage of political broadcasts emitting from the radio, the sense of oppression feels tangible and real.

This is helped further by the gorgeous visuals. Concrete apartment blocks are made into a thing of beauty when filmed from above and at a distance – what a difference accomplished cinematography can make to a picture – and the city roads and underpasses seem to pulsate like veins, echoing with loneliness whilst intimidating with their vastness. This is contrasted beautifully with the last-act woodland locations: although the film isn’t gripping in a traditional narrative sense, the visuals always manage to hold your attention. The highlight is without doubt a car chase set on a twisting woodland road enshrouded in fog; dangerous, exciting and visually splendid.

It is the final section of the film, with Ali and two soldiers lost in the endless woods, that entertains the most. The title of the film is apt, but perhaps not in quite the same way as one would first suspect. In fact, this is a film that in many ways shatters expectations. Ali doesn’t go all John Rambo in the final half hour and there are no tear-jerking monologues where the characters discuss their feelings. Instead, everything just is, with the chips falling where they may. The Hunter isn’t a film with mainstream appeal, but it did manage to resonate with me to some extent. A memorable, if sometimes obtuse experience that will probably alienate many Western viewers due to its tightly focused social commentary.