Hector: Episode 3 – Beyond Reasonable Doom is a point-and-click adventure game created by Straandlooper Animation, published by Telltale Games. Only a few months after Episode 2: Senseless Acts Of Justice was released – described in AMO’s review as being “just as crude, rude and hilarious as ever” – Episode 3 begins with Hector and his trusty sidekick Lambert stuck in a septic tank rapidly filling with liquid poo! Just another day in the Clappers Wreake Police Department…

Episode 3 is the final instalment in the Hector trilogy of games, which in effect join together to make one big continuous adventure – Hector: Badge of Carnage. However, Beyond Reasonable Doom differs slightly from the formula of the previous two games. Instead of having clear objectives and goals throughout – which certainly fitted in with the idea of solving a case in the previous episodes – the story dictates the gameplay this time around. Hector and Lambert are not working in their full official capacity as police officers here; indeed, they spend the first half of the game clad only in hospital gowns, their derrières on permanent display. 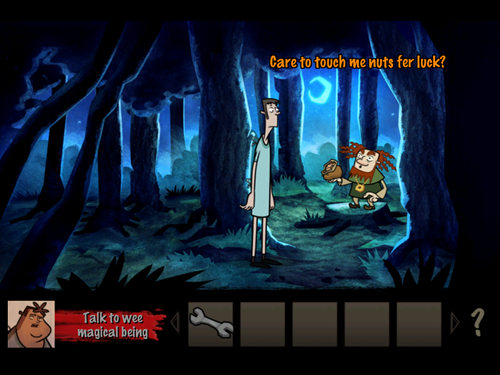 The constantly shifting objectives offer a much faster paced game than before, with the new locations proving to be some of the best yet seen in the series. The night-time woodland/farmland area at the beginning of the episode offers a welcome change from Clappers Wreake, with Lambert stealing the limelight as he tries to acquire nuts from a Leprechaun’s sack (fondly referred to as his nutsack – the jokes just write themselves really don’t they!) and fights a farmer with some of the sissiest punches known to man. Lambert has become such an essential supporting character that it’s hard to believe that he wasn’t even playable in Episode 1!

Yet this is Hector’s show – his name is in the title after all – and once he reaches the Clappers Wreake fair known as Clapfest the jokes and comical situations come thick and fast. Hector enters Lambert into a competition based on facial ugliness after exposing him to a dirty adult ride, rigs a competition where the first prize is a rusty car filled with baked beans, and adds cocaine as a powder to a cake stand! The puzzles are heavily inventory based and rely less on dialogue trees than before, which is mostly a good thing. However, the difficulty does escalate somewhat near the end and the lack of direction can occasionally prove problematic. Still, the puzzles are pleasing to solve and this is good old-fashioned adventuring like it should be, warts and all.

There isn’t much more to say about Hector: Episode 3 – Beyond Reasonable Doom apart from the fact that it’s a whole lot of fun. It is the longest episode of the entire series and offers a fantastic conclusion to the story previously told in episodes 1 and 2. The 2D graphics are a joy to behold and the voice acting, in conjunction with the sharp script, often manages to raise a smile, if not an outright laugh. The niggles of the previous episodes – such as the somewhat peculiar one button mouse controls – are still present and this episode won’t win over any new fans. However, as finales go it succeeds admirably. Hector: Badge of Carnage doesn’t reinvent the wheel – it simply makes it as crude, rude and hilarious as possible. Essential for any gamers who love satirical British humour and classic point-and-click adventuring!