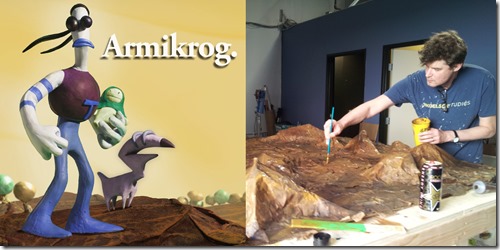 Armikrog is a clay and puppet animated adventure game currently being developed by Doug TenNapel (creator of Earthworm Jim and The Neverhood) and Pencil Test Studios. The team hope to raise $900,000 via Kickstarter to fund the game by the 27th June 2013. Alternative Magazine Online interviewed Doug in 2010 and Power Up was also chosen as one of AMO’s best books/graphic novels of 2009, with TenNapel described as: “One of the great graphic novelists of our time.” AMO is therefore proud to present an exclusive online interview with prolific graphic novelist and talented video game designer Doug TenNapel!

Hi Doug, thanks for your time and welcome back to AMO! For those of AMO’s readers perhaps less familiar with your work, can you please tell us a little bit about yourself?

I’m primarily a graphic novelist with 13 or 14 titles under my belt. But I got my fame from the early 90s by creating Earthworm Jim and The Neverhood.

I got my Master’s degree from Fullerton State, put out four graphic novels, sold a show to Disney and I am now making a video game.

It’s a puppet animation game full of mind bending puzzles and funky characters. It’s unique to my work in that this is one where we’re asking the donors to decide if the game is going to get made.

You’ve teamed up with Pencil Test Studios, Inc. for this project. How did this collaboration come about?

I’ve worked with Mike and Ed for about 20 years and we are all on board with a rabid love of animation. I know this sounds weird, but it’s actually not that common to be really into classic animation in gaming.

What does ‘Armikrog’ actually mean?

It’s the name of a huge fortress that our hero gets trapped in at the start of the game. The gameplay is about playing your way out of fortress Armikrog.

The game is being described by many fans as a ‘spiritual successor’ to the 1996 claymation adventure game The Neverhood. Would you say this description is accurate?

It is, but I have to emphasize “spiritual”. It’s not part of the same fabric of myth. But it’s the same kind of game done by the same team.

What are the main legal issues blocking a direct sequel to The Neverhood?

Uh, the main legal issue is that we don’t own the rights.

There was actually a sequel of sorts to The Neverhood released in 1998 called Skullmonkeys, but it was a platform action game rather than an adventure game. You are also known for Earthworm Jim, another platform game that still enjoys a strong following today. Are you a gamer yourself – and do you prefer adventure games, or action games?

If I have to sit down and play something I prefer an action game… it doesn’t require as much thought. Puzzle games really require a lot of concentration and some puzzles just can’t be casually solved.

Is it liberating with Armikrog telling a brand new story with fresh characters?

Definitely. It’s so much easier to create something new than to ask permission to work on something old. I don’t just like animating, I like to create. So making new characters and worlds gives me my jollies.

Just between me and you – could Armikrog possibly be set in the same universe as The Neverhood (without any direct links between the two games of course)?

I suppose it would be possible, but it’s not what we came up with!

Armikrog follows the adventures of a space explorer named Tommynaut and his blind alien, talking dog named Beak-Beak. What can you tell us about these characters?

They’re part of a space program with a long and valiant history on their home world. Tommynaut is the youngest of three brothers and his older brothers crashed and their missions were doomed. Tommynaut has a lot of pressure put on him to pull this mission off without a hitch… which is why it’s kind of funny that we open on his pod craft crashing. 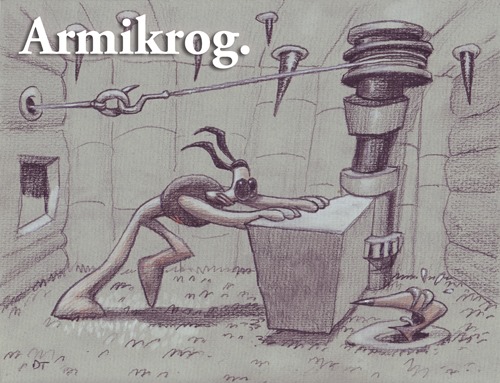 The Neverhood hardly featured any voice acting at all – by comparison, Armikrog sounds like it’s going to feature plenty of dialogue spoken by some very talented voice actors! Who is on board to lend their dulcet tones so far?

What was the creative decision behind Kleymen’s silence in The Neverhood?

He was always an innocent having been newly born at the start of the game. It just didn’t make sense to have him talk in that game, though if you remember Willie Trombone from the Neverhood it was really hard to shut that guy up.

Is it fair to say that Armikrog will be a much more vocal game – and feature plenty of banter between Tommynaut and Beak-Beak?

They’ll talk to each other, but not in the puzzle work. I don’t want vocal based puzzles at all. In a lot of rooms, they’ll be as mute as Klaymen in that I just don’t see the reason why they need to be talking for the most part.

Has the interface been nailed down yet (for example, will it be a one-click interface like in The Neverhood)?

Yes. We looked at the Neverhood and asked what were the features we liked and what ones we didn’t like. We ditched the first person canned video sequences immediately. But want to keep a simple interface… though we’re slightly expanding the inventory.

What’s the creative process when making a game with claymation, from start to finish?

I could write a book on that, but our particular method is to animate everything on paper, then try to force the puppet animation to follow the more dynamic drawings.

Technology has moved on a lot since 1996 – I’m guessing you won’t be dusting off your old Minolta RD-175! How will making Armikrog in 2013 differ from when you created The Neverhood in the mid-90s?

We do still use digital still cameras to capture the images, so that hasn’t changed, though the capabilities of the camera and resolution has definitely changed. Using green-screen and compositing has become much easier, and since we’re using the Unity engine the foundation of the game will be a lot easier to deal with.

The graphics are already looking wonderful – will Armikrog be displayed in high-definition?

Yes. That’s a key to the intro video we made. We want the whole game to look that good!

I clocked the opening claymation sequence at the beginning of the Kickstarter video at roughly 60 seconds long – how much time does it take to create a minute of footage using stop motion?

It took us about one month straight to do just that sequence. It was a pretty choppy start since we had to convert the office space into a shooting studio so that once production began, there were constant problems to solve in order to be able to keep working. 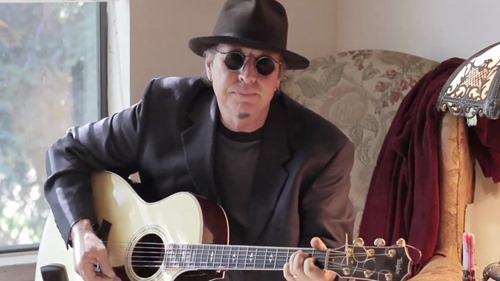 Terry S. Taylor (who composed The Neverhood’s super cool soundtrack way back when) is returning for Armikrog! Were you eager to collaborate with each other again?

Terry and I are now old friends. We’ve worked a lot together and he’s always just a really nice, easy-going artist to work with. He always surprises me with what he creates, and it’s always top quality. Really, just a dream guy to work with.

You’re asking for $900,000 – how does this budget compare to The Neverhood’s budget? Is it cheaper making this sort of game today?

Neverhood cost almost twice the money some fifteen years ago! But we have to work more creatively on our feet with the budget limitations. I know it sounds expensive from a micro funding standpoint, but it’s really hard to make a Neverhood-sized game with 15 or so hours of big, epic gameplay then try to come in with a shrimpy scrawny budget. Puppet animation is crazy expensive to produce. 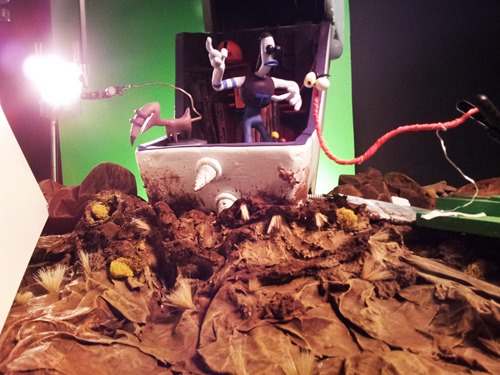 Why Kickstarter – do you think a traditional publisher would be interested in Armikrog?

A traditional publisher would never go for Armikrog. That’s where Kickstarter is unleashing a new generation of creative projects that circumvents the usual gatekeepers of production.

What goodies can backers look forward to?

We have everything from Terry Taylor’s soundtrack on the lower tiers, to full sculptures and puppet animation models available at the upper tiers.

I haven’t tried that number in years. Now it probably calls some hit man in Fresno so be careful.

What else are you working on at the moment?

I’m in the middle of an animated TV show right now and a couple of secret developments I’ve still got under my sleeve.

Thank you for your time! I’m confident you will reach your funding goal and I can’t wait to play the finished game!

Thanks for the pixels, Martin! I’m also hoping this baby funds, but we need the help of all your readers! Climb on board everyone!

For more information about Doug TenNapel’s latest project – and to pledge your support – please visit:

9 responses to “INTERVIEW – In Converstation With Doug TenNapel (Armikrog Kickstarter)”