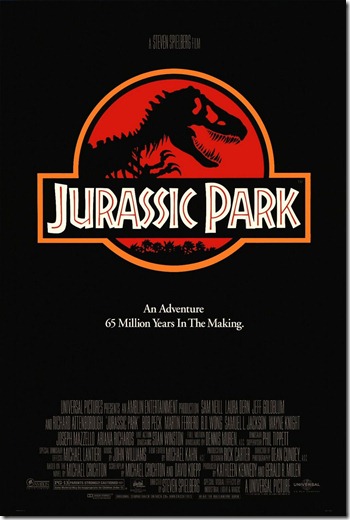 Jurassic Park is an Academy Award-winning science fiction adventure film directed by Steven Spielberg, based upon the novel of the same name by Michael Crichton. Released during the summer of 1993, the film went on to gross over $900 million worldwide, becoming the top-grossing film of all time (not to be surpassed until 1997 by James Cameron’s Titanic). A Blu-ray release of the Jurassic Park Trilogy is scheduled for the 24th October 2011 in the UK. In anticipation of this, Universal Pictures have decided to re-release a brand new digital print of Jurassic Park in UK cinemas on the 23rd September 2011. 65 million years in the making… Jurassic Park is finally back on the big screen where it belongs!

Jurassic Park opens on a rainy night on the island of Isla Nublar, where an unlucky park worker – acting as a gatekeeper – is fatally attacked by an unseen dinosaur being transported inside a large metal container, his fellow co-workers desperately discharging their electrical Tasers and firing their guns as they try to save him.  This opening scene acts as a powerful start to the film, strongly hinting at the danger and excitement to come without yet allowing the audience to get a good look at the dinosaur in question – an adult female Velociraptor.

Billionaire John Hammond (Richard Attenborough) has recently created Jurassic Park, a theme park built upon Isla Nublar featuring dinosaurs cloned with DNA extracted from mosquitoes preserved in prehistoric amber. Hammond’s investors are worried and he therefore needs various experts to visit the park and vouch for its safety. He visits an archaeological dig that he has been funding – at a rate of $50,000 a year – and promises to continue doing so for a further three years if paleontologist Dr. Alan Grant (Sam Neill) and paleobotanist Dr. Ellie Sattler (Laura Dern) agree to join him at Jurassic Park – which he merely refers to as a “biological preserve”. Excited at the prospect of continued funding, they leap at the opportunity.

Hammond’s lawyer Donald Gennaro (Martin Ferrero) also brings along Dr. Ian Malcolm (Jeff Goldblum), a mathematician who specialises in Chaos Theory. Rounding off the cast are Hammond’s two grandchildren – Tim (Joseph Mazzello) and Lex Murphy (Ariana Richards). The helicopter ride to the island promises great things for both the visitors and the viewer. The initial reveal by Hammond of a towering Brachiosaurus is still as majestic and awe-inspiring as it was in 1993. But the film – and Spielberg – are merely teasing, playing with the audience. Dr. Grant makes Hammond repeat himself, “We have a T-Rex.” Everything is building up towards the T-Rex…

Of course, it wouldn’t be much of a film if everyone simply piled into their automatic tour jeeps and had a great day out. The pacing of Jurassic Park is almost excruciating at times – in a good way. The tour proves largely uneventful at first, with Malcolm staring into the Jeep’s webcam at one point and enquiring “Now, eventually you do plan to have dinosaurs on your dinosaur tour, right?” Then a disgruntled employee named Dennis Nedry (Wayne Knight) turns off the electric fences so he can steal fertilized dinosaur embryos and all hell breaks loose.

It is at this halfway point that the slow, careful pacing pays off big time. The T-Rex attacking the visitor jeeps in the pouring rain is still one of the most exciting, exhilarating action sequences in motion picture history, rippling water and ominously twanging fence cables making way for the most iconic dinosaur of them all, realised using a combination of Stan Winston’s life-size model – a fibreglass frame covered by 3000 lbs of clay and an additional layer of latex skin – and pioneering CGI by Industrial Light and Magic. Coupled with its terrifying roar – a baby elephant mixed with a tiger and an alligator – the T-Rex proves to be the real star of the show.

The remainder of the film doesn’t quite seem capable of living up to this incredible midway sequence, but thankfully Spielberg still has a few tricks up his sleeve. Several sequences involving the Velociraptors, including a trip Dr. Ellie Sattler makes with the park’s game warden Robert Muldoon (Bob Peck) to the maintenance bunker, and a frightening chase through the park’s visitor centre kitchen with Tim and Lex, prove exciting, scary and memorable in equal measures. Although there isn’t much gore, the film certainly pushes its PG rating to the absolute limit.

In my opinion, there has been some rather unfair criticism of the acting in Jurassic Park over the years since its release. This is a popcorn film – probably the definitive popcorn film – and the actors are ultimately there to sell the special effects. That being said and done, the script has plenty of memorable lines and the story is well acted and told, even pausing for a philosophical debate about the ethics of having cloned extinct dinosaurs in the first place. It is directed and put together with so much respect that any wonky science can be quickly forgiven. Jurassic Park is a cinematic rollercoaster ride, pure and simple.

I defy anyone but the most jaded of cinemagoers to not appreciate and respect the monumental motion picture event that is Jurassic Park. It pioneered many new technologies that are still used in cinema today, often inferiorly. The special effects, utilising a mixture of models and CGI, put many contemporary CGI-dependant films to shame. John Williams’ score seals the deal, perfectly encapsulating the beauty and danger of these magnificent creatures from a bygone era. The new digital print, featuring full stereo sound, is made for the big screen. A modern-day classic that has most definitely stood the test of time.