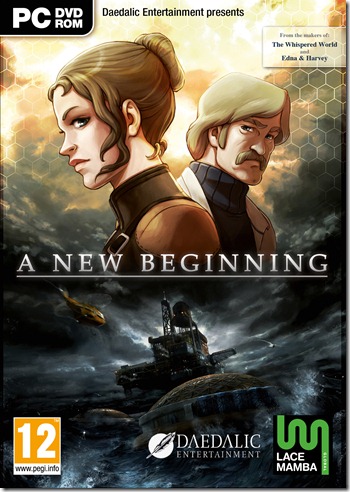 A New Beginning is an award-winning point-and-click adventure game from Daedalic Entertainment, makers of The Whispered World and Edna & Harvey. An eco-thriller with a twist, it tells the entwining stories of Fay, a radio operator who claims to be from the future, and Bent, a former scientist who was working on an eco-friendly alternative energy source before he retired. Together, they must save the world from a global climate catastrophe that threatens the very existence of humanity.

A New Beginning starts with a whimper rather than a bang. Retired bio-engineer Bent Svennson seems grumpy and slightly depressed, living in isolation deep within the forests of Norway. This laidback opening section allows players to familiarise themselves with the game’s controls and interface as they control Bent and attempt to solve some simple puzzles, such as repairing an old generator. The control scheme is a familiar one, reminiscent of the ‘coin verb’ used in The Curse Of Monkey Island, only much more futuristic and streamlined in appearance. Holding down the left mouse button on a hotspot offers several options, whilst right clicking displays the inventory at the bottom of the screen. Holding the spacebar highlights all available hotspots.

Before long a helicopter lands near Bent’s cabin and a woman steps out introducing herself as Fay. Much to Bent’s utter surprise and disbelief, she claims to be a time traveller sent from the future to stop climate change from ravaging the planet as early as the year 2050. Sydney will become enveloped in flames, London flooded, the Taj Mahal swallowed up by desert sands, and Moscow buried deep under snow and ice. Bent is sceptical of Fay’s claims, so she tries to convince him by recounting her time travels so far. This is a clever, almost film-like storytelling device. As Fay tells the story, the player takes control of her character, in effect playing through her memories. Bent and Fay even pipe in from time to time from the present, discussing events that have just been shown. 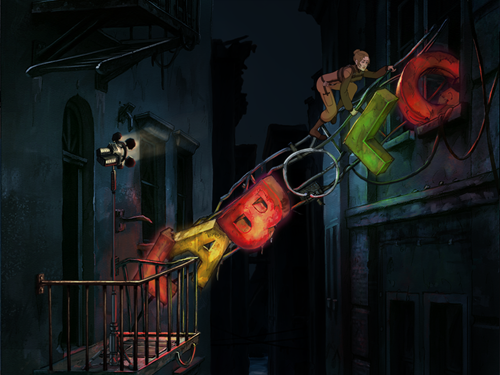 San Francisco, circa 2050, is where these vivid recollections take place. The streets are flooded and abandoned, buildings falling into disrepair and ruin. Even when depicting tragic destruction, A New Beginning looks beautiful; this is the most stunning animated adventure game I have played since the original Broken Sword. The present-day locations are varied too, ranging from a climate change conference building to an offshore research facility off the coast of Norway. Each location feels satisfyingly authentic and is depicted with real artistic flair. For example, the convention centre could have been a generic, boring place to explore. However, the use of vibrant purple and violet colours throughout this location not only makes the predominantly concrete structure eye-pleasing, but emphasises the ticking clock working against Fay and Bent as time advances towards the destruction of the planet.

The puzzles are for the most part satisfying and challenging without being obtuse. However, there are some puzzles that seem to take a leap in logic and it isn’t always 100% clear what the player should be doing. The lack of a hint system is pretty glaring; the game is kind enough to let you skip some puzzles after a set period of time if you are struggling, yet for the majority of the game you are left to fend for yourself, making the difficulty slightly inconsistent across the whole experience. Some aspects of the game are also lost in translation: one puzzle involving chanting crowds and a bald security man still made little sense even after consulting a walkthrough. 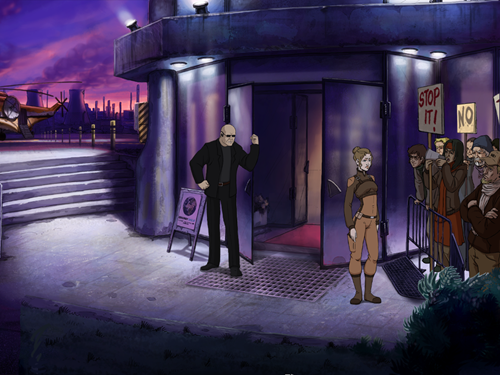 There are also problems with the translation and localisation to English from the original German. Sometimes the subtitles don’t match the spoken words, as if the voice actors decided to improve the occasionally dodgy line and nobody bothered to update the script afterwards. Some hotspots are still in German and there are even instances of the characters suddenly uttering a random line in German before returning to English. Sadly, the worst letdown quality-wise is the poor spelling throughout the game. A repeat offender is the word algae, which is constantly spelt as ‘alga’ during the otherwise excellent comic strip cutscenes.

It doesn’t help that the voice actors, though competent, often lack depth of emotion in the delivery of their lines. The actress for Fay is pretty decent, but Bent’s voice actor often misses the mark, resulting in two emotional deaths that lost most of their punch, much to my dismay. The graphics, as previously mentioned, are phenomenal and truly elevate the entire experience. The game is displayed in a 4:3 aspect ratio with black bars at either side of the screen – a consequence of the long development time and fixed background art resolution – yet I managed to stretch the game to fill my 16:10 monitor with minimal distortion. The soundtrack by Daniel Pharos and Knights of Soundtrack is rousing and exciting, offering Hollywood quality music that makes the entire experience all the more epic. Even though the subject can be a little dry at times – some gamers may even find it boring – the music always sets the mood perfectly.

Despite lush graphics and a superb soundtrack, A New Beginning’s greatest asset is its story. A mixture of science fiction, drama and eco-thriller, it manages to tackle subject matters that many gamers would immediately dismiss as boring or tedious. Thankfully, these misconceptions couldn’t be further from the truth: the reason I have not divulged many plot points beyond the opening sections is precisely because the plot is so richly layered, full of twists and turns, offering an ending that is both emotional and uplifting.

A New Beginning certainly isn’t perfect. The lack of widescreen support is a major oversight in 2011, the puzzles can sometimes seem a little bit off and the English translation often leaves a lot to be desired. Regardless, the storytelling is first rate and the overall experience is a memorable one. Yet the real delight is Fay: she is one of the best female gaming characters there has been in a long time; strong, determined and sexy without showing an inch of flesh below the neckline. Play this game for her story alone: it is one well worth hearing.

AMO’s review copy of A New Beginning was provided by Lace Mamba Global. The UK retail release (recommended retail price: £29.99) contains the full game, a double-sided poster and the original game soundtrack on an audio CD.

One response to “GAME REVIEW – A New Beginning (PC)”