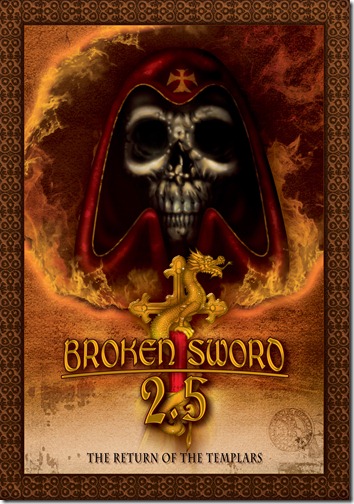 A fan project 10 years in the making, Broken Sword 2.5 is a very special game indeed. German-based MindFactory have created a lovingly crafted tribute that is free to download and retains the charming graphics of the original 2D games. Although it was released on September 28th 2008 (a full German version with optional English subtitles), it is only now in 2010 that players can finally play with English voices. A few years ago I was lucky enough to audition and successfully record two voice parts. Read on to learn more about the game and hear my contributions!

The last months were quite a blow of fate to George Stobbart. First he had to leave Nico for one year because of an important trip to the USA, then his beloved grandfather died of a cancerous growth. But that was not everything. When George receives a telegram from France one day he already has a foreboding of evil. The consigner is–Nicole Collard, Paris, France. His presentiment shall turn into cruel certainty: Nico is dead! "First my grandpa and now Nico?", George thinks and takes the first plane to Paris.

On his arrival: Rain, storm, like an appropriate divine answer to George’s situation. In Nico’s apartment the next shock: Nico is alive. Totally bewildered he tells her about the telegram but Nico seems not to be surprised. On the contrary, she asks George to leave the apartment. She does not seem to take delight in the unexpected reunion.

More information about Broken Sword 2.5 can be found via the official website: http://www.brokensword25.com/

This is pretty much just my regular voice! Šarūnas Ledas was handling all of the English voice acting and casting. Here, he asked me to just be myself, so that is exactly what I did! It feels very strange hearing myself a few years younger in a video game… (Please note that the audio blip during one of the final sentences is a problem with YouTube and doesn’t occur in-game!)

I did several versions of this voice, but this was the one that they eventually settled on. Although the character is referred to as the ‘Watchman’ in-game, my script originally identified him as a policeman. I honestly feel I could do this part a bit better nowadays (as my voice is naturally deeper anyway) although I am just pleased I didn’t fluff any of my lines!

Special thanks to my friend Craig Boardman for helping me record my lines all those years ago!