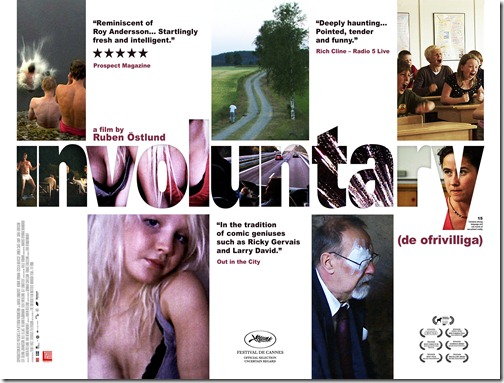 Involuntary (De ofrivilliga) is an award-winning Swedish film directed by Ruben Östlund in 2008. Showcasing several parallel stories that at first appear totally unrelated, the overarching narrative deals with group behaviour in a darkly comedic manner. Involuntary is now showing in cinemas across the UK.

Involuntary is shot in a highly unique style, with no cuts during scenes and camera angles that are often voyeuristic rather than practical. The result is in an initial detachment from the characters (it is hard to empathise with someone’s shoes for example) that nonetheless later develops into genuine emotional investment. The characters feel real and natural; they endear, annoy, humour and disgust us. They are human.

The characters themselves are kept at a distance, but are ultimately not that different from people in any country. Swedish society doesn’t come across as particularly bad. Rather, the film highlights behavioural trends that span continents and define generations. A schoolgirl is shown the effect of group pressure with a simple experiment. Later, her teacher feels a similar pressure, ostracised by colleagues after condemning a fellow teacher for violence against a pupil. Should she do the right thing, or bend to fit in? 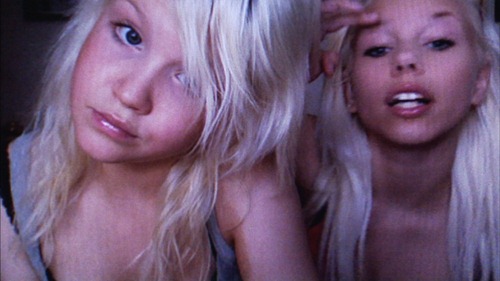 Elsewhere, two young blonde girls are shown growing up faster than they should. A scene where they take photographs, offering glimpses of underwear and pouting their lips, highlights deep social problems with regards to the effect the media has on young people and their development. Involuntary is clever in this sense. These girls are desperate to grow up as fast as possible. Yet the adults shown in Involuntary are far from grown up.

A perfect example is Leffe, a married man who likes to show off for his mates when drunk. Yet he soon takes a prank too far, performing a sexual act on his friend. Shown from a distance, initial tomfoolery becomes uncomfortable group bullying.  To portray everyone as a victim is a tall order at the best of times, yet Involuntary succeeds admirably. Everybody seems equally defenceless and lost, including Leffe. It is as if people try to find their place in life by copying the person next to them. Men and women are still boys and girls beneath it all.

Further childishness is apparent during the scenes involving a coach driver who won’t carry on with his planned journey until somebody admits breaking a curtain rail in the toilet. His stubbornness is only outmatched by the culprit, an actress who seems nice enough but has no intention of doing the right thing and owning up. It all seems to stem from how you are brought up, and even then the end result is a gamble. One man, hit  earlier on in the face by a firework, is so stubborn that he won’t visit the hospital until he literally collapses.

Involuntary mostly succeeds because this should all be uncomfortable viewing… but it really isn’t. Darkly comedic, it raises as many laughs as it causes furrowed brows and remains hypnotically involving even when it shouldn’t. As a snapshot of Swedish life, it feels both skewed and authentic. Shot against the grain. it won’t be for everyone. It doesn’t even really go anywhere. Then again, perhaps that is the entire point.

Involuntary was released in cinemas across the UK on 29th October 2010.