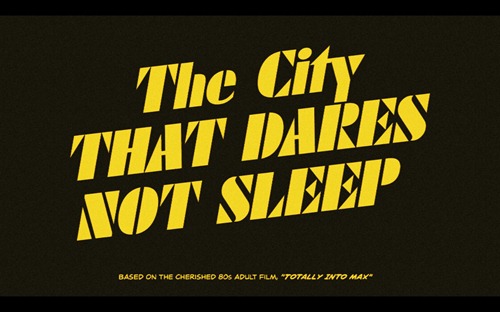 The final episode of Sam & Max: The Devil’s Playhouse is finally upon us. A somewhat mixed season so far – in this reviewer’s eyes at least –  the City That Dares Not Sleep wastes no time making amends. It is an epic finale in every sense of the word. What’s more, the game has changed. We no longer get to play with the ‘Toys Of Power’ (nearly all of them were destroyed at the end of last episode remember) and Max is a now a lumbering giant, a monster destroying the city. This leaves Sam going solo in the more traditional Telltale mould, desperate to save his little buddy. What ensues had me grinning from ear to ear… 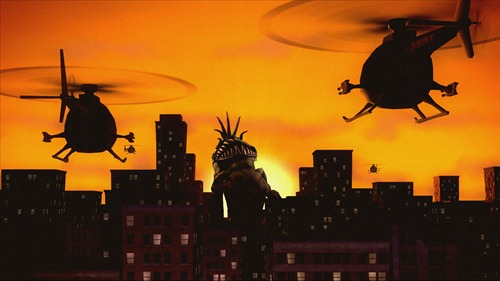 The basic premise of The City That Dares Not Sleep is that Sam needs to get a team together, make the DeSoto look appetising, get monster Max to eat them all and then fix his brain from the inside. It is a crazy plan, but it might just work! The initial puzzle is one giant ‘recipe’ for the DeSoto, admittedly nothing new but done with enough pizzazz and brevity to remain involving. The real meat of the game takes place inside Max. A masterstroke of narrative and design, this premise nearly singlehandedly irons out any complaints I had last month.

The inside of Max is, predictably, crazy. A kitchen. A work out room. A games room. An inventory! It reminded me a lot of Tales Of Monkey Island: Lair Of The Leviathan but on a much larger, zanier scale. Max’s vocal quips are also kept in the loop via the appearance of ‘parasites’, detached flaming Max heads that float around causing mayhem and encouraging people to ‘sleeeep’. All the rooms are connected via lava lamp-esque pipes and every single location feels unique, detailed and inviting. Hardly any locations are recycled this episode and when they are, it is in context and feels completely justified. 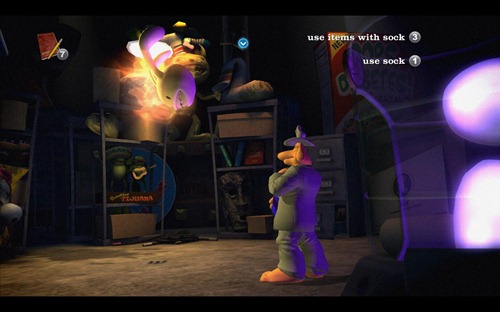 The puzzles are admittedly brilliant, if not slightly on the easy side. Hints from Sam were a great help too: he seemed to pipe up with a helpful titbit whenever I got stuck. Sadly, there still aren’t that many inventory based puzzles, but taking control of monster Max, with every room controlling a different function such as his arms or legs, keeps the adventuring tight and focused. The only downside to this is that sometimes, the game will allow you to move monster Max around the city yourself. With a fixed camera angle and huge blocks of buildings all over the place that show the engine’s graphical shortcomings, these short sequences are easy enough but could have been implemented more effectively.

*Minor Spoilers Warning* Just in case some people want to play the game without knowing what characters appear, I have decided to keep the screenshots relatively spoiler free and just add a quick paragraph here about some of the supporting cast. Sybil returns, pregnant with a ‘National Monument’ no less… her character model constantly had me in stitches just from looking at it! Mr Featherly is happy to give you a vital ingredient for your recipe earlier on, but can’t produce it with everyone watching. Elsewhere, on a rooftop overlooking the mayhem, The Devil is sick of all the bad PR he is getting and tries to convince the world he doesn’t have anything to do with recent unfolding events… you get the idea. Most of this season’s regulars return too. Much like the environments, the cast of characters have been given a much needed injection of variety and it has paid off dividends. Everything ties together beautifully with hilarious results. *Spoilers Over* 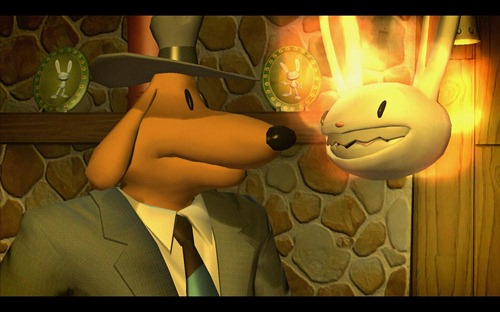 I am pleased to report that I had a review copy of this game three weeks in advance and hardly came across any bugs or glitches at all. The PC gamepad icon issue from last month is gone, nobody randomly disappears and everything is present and correct as it should be. Everything feels really stable and polished and I began to wonder whether the final episode got some extra special treatment from Telltale compared to last month’s episode…

Also worthy of a special mention is the soundtrack. Sam & Max has always had great music, but this episode sounds simply awesome! The hilarious new opening credits (sans Max of course) is made completely epic with a powerful remixed theme tune. Elsewhere, each environment has its own catchy musical accompaniment. The highlight for me was the guitar solo inside the ‘work out’ room… we need a CD made available now Telltale! 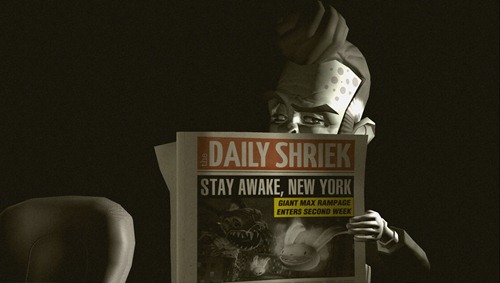 Overall, this episode provides a really solid ending to The Devil’s Playhouse. Varied environments? Check. Bugs and glitches ironed out? Check. Funny? Check. It is nice to be laughing hard again with Sam & Max. The ending revelation is twisted and mind-blowing. I still personally feel that the story, when taken as a five episode arc, is slightly lacking overall. However, Telltale do something great here that reminded me exactly why they are such a great studio… the end credits of The City That Dares Not Sleep are a knockout. Toying with your emotions is an understatement! You will be moved.

Sam & Max is so crazy that you have to just go along with it. It will never make total sense. It doesn’t really have to either. This is a madcap cartoon brought to life, a walking, talking dog and a psychotic, rabbity-thing let loose on our computer/television screens. By remembering that the truly important thing in this franchise is the relationship between Sam & Max themselves, any story deficiencies fade away as background noise. A great end to the season that most definitely goes out with a bang.