Resident Evil 2 (2019) is a remake of the original survival horror game of the same name from 1998. Rebuilt from the ground up using Capcom’s impressive RE Engine, players must once again take control of rookie cop Leon S. Kennedy and college student Claire Redfield as they fight to survive the night and escape a zombie-infested Racoon City.

Resident Evil 2 is a brilliant reimagining of a beloved classic that is sure to please fans and newcomers alike. It takes the very best parts of the original game – the characters, the setting, the scares – and introduces a brand new over-the-shoulder camera and modernised control scheme that give players an increased sense of agency and control. The pre-rendered backgrounds, fixed camera angles and tank controls are gone, but their removal hasn’t dampened the sense of fear in the slightest.

Much of this remake’s power comes from its increased fidelity; the RE Engine brings Resident Evil 2 to gruesome life as the dead shuffle hungrily towards you. Capcom has focused on ‘wet’ gore for its return to Racoon City and the results are spectacular. Zombies disintegrate as they’re shot (arms and legs can now be strategically removed), taking an inordinate amount of bullets to put down permanently. Even a lone zombie can be deadly and this undoubtedly adds to the fear factor; it’s refreshing to see the walking dead posing a genuine threat when they’ve so often been neutered in modern media.

Resident Evil 2 follows the original story fairly closely, with a new playable introduction at a gas station allowing players to get to grips with Leon or Claire; either character’s ‘A’ scenario can be played first, which will then unlock the other character’s ‘B’ scenario. The over-the-shoulder perspective allows the player to aim their guns freely, opening up a world of possibilities when facing a horde of zombies. However, there probably aren’t enough bullets to take every enemy down, so it’s often a case of clearing a path and running for your life.

Leon and Claire eventually end up being separated by an explosion and must make their way to the Racoon Police Department, far easier today than it was in 1998; the improved controls and increased draw distance will allow experienced gamers to run circles around the zombies lunging at them. In truth, this can make the recreation of the iconic opening dash to the police station feel like a somewhat disappointing walk in the park. Thankfully, once you’re inside the RPD, things start to ramp up. Significantly. 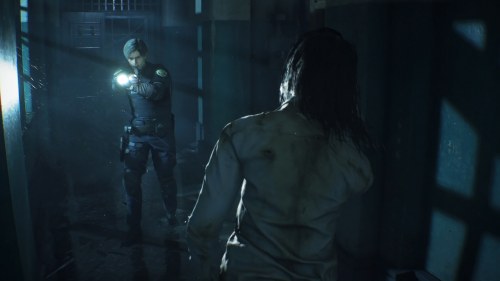 The power is off, the corridors are narrow and even a lone zombie can cause serious damage if you aren’t careful. The blind Lickers with their razor-sharp claws and barbed tongues make things even trickier; it’s often better to sneak past them rather than waste bullets. The graphics are at their most stunning when it’s dark, with the flashlight casting highly realistic shadows; movement and animations feel incredibly smooth too thanks to the game targeting 60 frames per second. Edging down a dark hallway as the wind howls and rain sweeps in through a broken window – straining to hear and locate the nearest enemy – is certainly a nerve-wracking experience, and the tension only intensifies once the unstoppable Mr. X arrives.

Mr X. (never named as such in-game; but rest assured, that’s his name) is terrifying, calmly stalking Leon and Claire throughout their respective campaigns. He walks but never runs – Sting would be proud – and shooting him will only slow him down for a short period of time. In the original 1998 game he only ever appeared during the ‘B’ scenarios, but for the 2019 remake he’s a constant threat from very early on and can only be killed when the story says so. Remember all those enemies you didn’t kill to conserve ammo? They’re now in your way as you run (alerting nearby Lickers in the process) from an unstoppable abomination, trying to solve the highly unrealistic yet charming puzzles – no doubt a byproduct of the original Resident Evil 2’s quirky Japanese development in the late ’90s – as quickly as possible.

Thankfully, the realism of the puzzles – or rather, the lack thereof – doesn’t affect the fun factor at all; much like the superb remake of the original Resident Evil, this sequel is basically one great big puzzle waiting to be solved. Juggling items is still a pain at times, but inventory size can be upgraded and it never becomes too frustrating.  It’s truly impressive just how well everything fits together and progression feels both natural and earned. The player that can keep their head when all about them are being decapitated by Lickers will be most likely to prevail in this George Romero-esque tale of survivors, zombies and shady corporations.

Despite the relatively thin plot – not necessarily a criticism; there’s certainly something to be said for being direct and getting straight to the point in the case of Resident Evil 2 – both Leon and Claire are incredibly well realised. Nick Apostolides and Stephanie Panisello (Leon and Claire respectively) give natural, nuanced performances that go far beyond professional voice acting to include both motion and facial capture. These talented actors bring the main characters to life and ensure that even the hammiest of moments still rings true.

There are only a few small complaints to be made. The new soundtrack is pretty good, but it mostly fades into the background and isn’t a patch on the original (which can thankfully be reinstated via paid DLC). Also, the giant crocodile looks great but isn’t much fun to defeat. Finally, the ‘B’ scenarios aren’t different enough from the ‘A’ scenarios and the stories in each don’t slot together neatly. For the most part, Leon and Claire fight the same enemies, solve the same puzzles and defeat the same bosses; it’s a missed opportunity that can be distracting at best and disappointing at worst.

Yet these are relatively minor quibbles when the overall quality of this remake is so incredibly high. Resident Evil 2 (2019) is a faithful retelling of the ’98 original that gives the RPD – and beyond – a fresh lick of paint while making the gameplay experience palatable for a modern audience. Rather than simply relying on cheap jump scares, Capcom has expertly crafted a survival horror  game that treats its audience with respect. The end result is already one of 2019’s best games and a serious contender for game of the year; killing zombies has never been so satisfying, or so much fun. Let’s hope a Dino Crisis remake comes next…