Broken Toys is the third episode of The Walking Dead: The Final Season, an episodic adventure originally developed by Telltale Games (Tales from the Borderlands, Guardians of the Galaxy) that is now being completed by Skybound Games following the former studio’s sudden closure. In this penultimate episode, Clementine must face an old friend turned foe head-on and keep AJ safe as she fights to rescue her kidnapped friends.

It feels like something of a miracle to be reviewing Episode 3 of The Walking Dead: The Final Season in 2019. After all, it was only four months ago that Telltale Games shut its doors, making over 250 employees redundant without notice. Skybound Games stepping in to complete the last two episodes of The Final Season – rehiring as many original team members as possible in the process – was truly a divine intervention of epic proportions.

Skybound is no Konami either; thankfully, Telltale’s name hasn’t been completely scrubbed from The Final Season. Delays aside, players will be hard pressed to notice that the project has switched development studios at all. Picking up right where Episode 2 left off, Broken Toys starts with an interrogation that allows Clementine (and by extension, AJ) to be either merciful or brutal, with the player’s decisions during this scene undoubtedly feeding into subsequent decisions made later on. 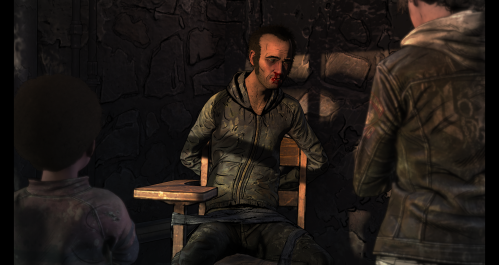 This is the first of many engaging moments throughout Broken Toys; even when the gameplay falters – the action sequences are still pretty clunky – the strong writing and voice acting will draw you back in. However, some plot developments do feel out of place. The decision to hold a party when the raiders could return at any moment seems particularly misjudged and far-fetched; yet some wonderful insight into each character is gained as a result of slowing things down and AJ dancing is so precious it will make your heart ache. It’s genuinely lovely to see him acting like a goofy little kid for once.

Elsewhere, a first-person sequence involving a shedload of zombies that seems completely ridiculous at first ends up being surprisingly moving (despite zombie-whisperer James being completely off his rocker… right?), while a dream sequence involving a certain special someone from Clementine’s past is both incredibly moving and utterly heartbreaking. It’s hard to believe how far Clem has come since Lee Everett first found her afraid and alone in that treehouse all those years ago.

It’s becoming readily apparent that The Final Season is mirroring the first season in many ways. Just like Lee before her, Clementine now has a young person to look after – a child that depends on her – who is not yet fully formed. Clem’s actions – the player’s actions – are constantly shaping AJ’s worldview and redirecting his moral compass. It’s a fascinating tug of war between deciding what is right (and wrong), and what is absolutely necessary for survival.

With so many callbacks to the original (and arguably still the best) season, it only seems right that Lilly has returned for these final episodes as the main antagonist. Her character is Clementine’s polar opposite, misshapen beyond repair by anger and betrayal. Incredibly sweet voice actor Nicki Rapp is almost unrecognisable as Lilly, each of her bitterly delivered scenes opposite Melissa Hutchison as Clementine  (world class, as always) buzzing with pure energy. These are two formidable ladies you certainly don’t want to mess with. Concluding with an explosive cliffhanger that will make players shake their heads in disbelief, Broken Toys is a strong penultimate episode despite its sagging midsection; it’s hard to believe that it almost didn’t get made. It isn’t perfect by any stretch of the imagination, but the whole of Episode 3 is greater than the sum of its parts. Episode 4 will arrive in a fairly unique position; without needing to worry about future seasons, it has the potential to be truly divergent for each individual player. With only one more episode to go, all bets are off then. Let’s just hope Clementine gets the ending she deserves…