A New Frontier is the third season of Telltale Games’ critically acclaimed episodic adventure game The Walking Dead: The Telltale Series. It’s been over two years since we last took control of Clementine in The Walking Dead: Season Two (although love did put a gun in Michonne’s hand earlier this year). The third season debuts today – 20th December 2016 – with a special two-part premiere… but this won’t be the Clementine you remember.

For those new to The Walking Dead and/or Telltale Games, each of the previous seasons featured countless moments where the player was tasked with making a timed decision. Some of those decisions were easy, whilst others were tough. Some felt impossible. Each decision had a knock-on effect that tailored the story and the experience to each individual player.

To give some context, two of the main characters died at the end of the previous season for this reviewer, leaving the protagonist Clementine on her own with a small baby to take care of. Those two characters won’t be dead for all players going into this latest season.

Previously, the process of carrying a save file across Telltale seasons has been less than smooth and was outright impossible when moving from a tablet or console to the PC version. Thankfully, that issue has finally been resolved with A New Frontier. All players need to do is launch Season Two, upload their save to the cloud, then download it within this latest instalment via their platform of choice, while newcomers can simply choose ‘Start New Story’ for a ‘default’ version of Clementine.

However, there is an alternative option that arguably offers the easiest and most effective solution for returning players: the ‘Story Generator’. Choosing this option will present a series of multiple choice questions and images. It works brilliantly as a story refresher and will guarantee your choices stick moving forward. AMO can confirm this option works superbly and accurately reflects the choices previously made in Season One and Season Two.

In A New Frontier, players take control of a young man called Javier. A recovering gambling addict before the apocalypse broke out, he now travels with his sister-in-law and her step-kids in an old van, trying to scavenge for supplies while staying ahead of a relentless zombie herd. This makeshift dysfunctional family is all he has left. They’ve forced him to finally grow up, and he’ll do anything to protect them.

When a search for gas goes wrong and he’s separated from his family, he ends up with a shotgun aimed at his back. Clementine is back (!) with a vengeance, but she’s changed. The sweet, innocent little girl who first met Lee Everett is now a badass loner with serious trust issues and a missing finger. Javier is certainly a likeable new protagonist with an interesting backstory, but it’s Clementine’s return that truly intrigues. What happened to her after the events of Season Two? The answers are revealed slowly during flashback sequences that prove to be just as gripping as the main narrative.

The voice acting is excellent – as is the music by long-time series composer Jared Emerson-Johnson – but it’s Melissa Hutchison as Clementine that once again steals the show. She was quite simply made for this role and does a great job conveying an older Clem that still sounds fully recognisable. Her chemistry with Jeff Schine as Javier is a continual highlight of these first two episodes and it’s wonderful to have her back.

Seeing her through Javier’s eyes is also really cool, similar to the way Raiden witnesses the legendary Solid Snake in action during the main events of Metal Gear Solid 2. It’s a sound storytelling decision to leave players uncertain of what Clementine has been through and what she has become since they last spent time with her. Javier more than holds his own as the new protagonist and his story is a compelling one. Somewhat reminiscent of a younger version of Joel from The Last of Us, he’s suddenly thrown into a series of situations where his family is put at risk and he has to make decisions where there are no clear-cut answers to be found.

The gameplay will be more than familiar by now to fans of the series – a mixture of simplistic exploration, conversation trees, quick time events and timed decision-making. Thankfully, the balance of each of these elements is pretty much perfect in Ties That Bind Part I & Part II. Although each episode is shorter than usual, they do feel like self-contained episodes. They come together to make a memorable premiere that will last anywhere between three to four hours.

The world of The Walking Dead has always been a great fit for Telltale’s unique style of adventure game and there are some truly shocking moments here that seldom feel cheap. The decisions are as tough as ever but they always feel fair, even when they’re not. The technical aspects are also rock solid on PC, with some beautiful graphics and no glitches to be found aside from the occasional flickering background texture. It certainly feels a lot more stable than the recently released Batman: The Telltale Series. 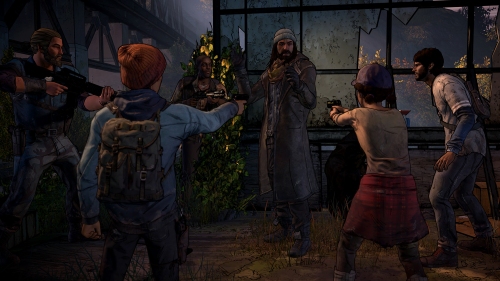 In the end, The Walking Dead: A New Frontier – Ties That Bind Part I & Part II is a gripping start to a brand new season from Telltale Games. The original season was arguably the studio’s finest work to date and A New Frontier certainly captures some of that old, elusive magic. It’s great to end 2016 with Clementine back among us – even if she does seem far more trigger-happy than we remembered. Punctuated by a cliffhanger ending that’s a genuine jaw dropper, A New Frontier is undoubtedly a bold title; but Telltale Games has delivered on its promise. The wait for Episode 3 is already unbearable.