Give No Shelter is the third and final episode of The Walking Dead: Michonne, a three-part episodic miniseries from Telltale Games (Tales from the Borderlands, Game of Thrones) based on Robert Kirkman’s best-selling comic books. Can Michonne protect an innocent family from Norma and the vengeful Monroe crew while coming to terms with the haunting loss of her daughters? Only you can decide…

Give No Shelter begins immediately after the events of the previous episode, with Michonne and the remaining Fairbank family members holed up in a house in the woods after being attacked by Randall and his men. Based on the player’s final choice at the end of the previous episode, Randall will either be alive or dead. It isn’t long before his sister Norma calls on the walkie-talkie – she wants him back alive and has captured the rest of Michonne’s boat crew to use as leverage.

With each episode of this three-part mini series being so short (again, this is a 1.5 hour adventure), the only member of the boat crew the player has really had a chance to get to know – and therefore truly care about – is Pete. Telltale must have realised this, because there is a short flashback near the beginning of Episode 3 where Michonne chats with British character Oak, who was only briefly shown in the first episode. It’s a nice try, but it isn’t really enough: the stakes don’t feel very high. This is Michonne’s show – and we know she can’t die. 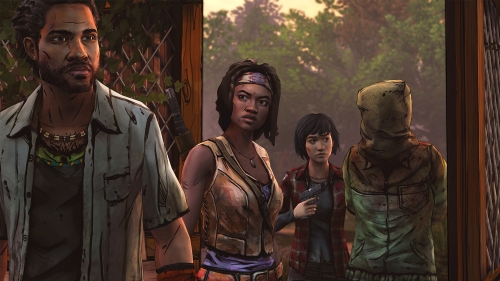 Thankfully, Give No Shelter succeeds in several other key areas. The Fairbank family has been torn completely apart in a relatively short space of time, with the two youngest children struggling the most to come to turns with the ugly realities of the new world. Michonne tries to help as best she can, but seeing children in danger was never going to be good for her sanity – the flashback sequences of the previous episodes return in full force here and they’re more devastating than ever before.

These moments are what make Give No Shelter – and The Walking Dead: Michonne in general – worth playing. Samira Wiley is brilliantly cast as Michonne, expertly conveying the relentless despair of a mother who has lost her children. It isn’t merely a gimmick to add cheap emotion. It’s an integral part of who Michonne was, is and will become. Whether she’s in a suit and unarmed or wielding her trademark katana, she’s one tough mother. 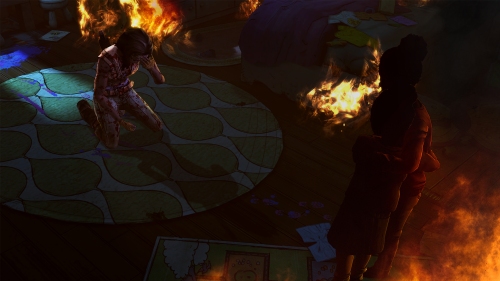 The rest of the game is fine too, even if it does essentially boil down to a series of quick time events. The action is fast and brutal, the decisions are tough and the storyline is engaging in the moment. Complaining about the smoke and mirrors of the decision-making seems a bit of a moot point. It isn’t about how each decision will make sweeping changes. Instead, it’s about how each player will put their own emotions and feeling into the events unfolding on-screen. Playing as Michonne is cool. Being her? That’s awesome.

Give No Shelter ends the series with a satisfying finale. Taken as a whole, it never quite reaches the heights of Clementine’s adventures, but Telltale has certainly captured the essence of one of the comic book series’ most iconic characters. For that reason alone, they should be commended.

One response to “GAME REVIEW – The Walking Dead: Michonne – Episode 3: What We Deserve (PC)”